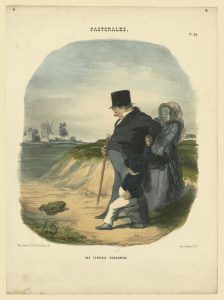 (Print Department) The career of Honoré Daumier (French, 1808-1879) spanned one of the most turbulent periods in French history, including the Revolution of 1830, the Revolution of 1848, the rise of Napoleon III, and the Franco-Prussian War. Daumier established a reputation as a painter and a sculptor, as well as a printmaker. However, it was through his lithographs that his talents as an artist and as a political and social commentator were fully realized.

Boston Public Library’s collection of works by Daumier includes his early caricatures of King Louis-Philippe and other political figures, as well as plates from his later series, including L’Histoire Ancienne, Les Bons Bourgeois, Les Gens de Justice, and Actualites. Of particular interest are a number of white paper proofs, which had to be submitted to the government censor for approval before an image could be published. Although a number of Daumier lithographs and bound volumes of La Caricature came to the library as part of the gift of Albert H. Wiggin in 1941, the majority of the library’s Daumier collection was acquired in 1948 when the Library purchased the collection assembled by the French collector Albert Maroni (1852-1923) and his heirs.

Online access: Digitized images from this collection are available through Digital Commonwealth.