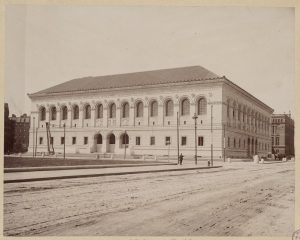 Established in 1848 by an act of the Great and General Court of Massachusetts, the Boston Public Library (BPL) was the first large free municipal library in the United States. In 1839, French ventriloquist M. Nicholas Marie Alexandre Vattemare became the original advocate for a public library in Boston when he proposed the idea of a book and prints exchange between American and French libraries. The Mayor of the City of Boston, Josiah Quincy, Jr., first president of the Board of Trustees, Edward Everett, and his successor, George Ticknor, were also at the forefront of the library’s establishment.

Boston Public Library's first building of its own was a former schoolhouse located on Mason Street that opened to the public on March 20, 1854. However, it was obvious from opening day that the quarters were inadequate for the library's collection of sixteen thousand volumes. In December 1854, library commissioners were authorized to locate a new building on a lot on Boylston Street, which opened in 1858 at 55 Boylston Street with seventy thousand volumes. Twenty years later, as the library outgrew that space, the Trustees asked the state legislature for a plot in the newly filled Back Bay. On April 22, 1880, the state granted the City of Boston a lot at the corner of Dartmouth and Boylston Streets.

Charles Follen McKim of McKim, Meade, and White was appointed the principal architect in 1887 for the new building. The present Central Library in Copley Square has been home to the library and has served as its headquarters since 1895, when Charles Follen McKim completed his "palace for the people." 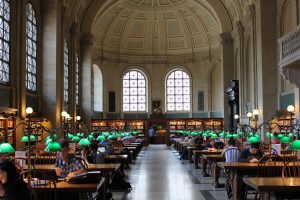 In 1986, the National Park Service designated the McKim building a National Historic Landmark, citing it as “the first outstanding example of Renaissance Beaux-Arts Classicism in America.” Within the McKim Building are exquisite murals series by John Singer Sargent, Edwin Austin Abbey, and Pierre Puvis de Chavannes, a peaceful inner courtyard, and additional works of famed sculptors and painters that can be viewed via the library’s daily art and architecture tours. Bates Hall, the iconic reading room located on the second floor of the McKim building, is named in honor of Joshua Bates, a London merchant banker born in Weymouth, MA, who in 1852 donated $50,000 for the library’s establishment and another $50,000 for the purchase of books. He was the first major benefactor of the BPL and initiated that its services be “free to all.”

The McKim building restoration and renovation project began in 1980 with a planning grant from the Massachusetts Historical Commission that enabled the Trustees of the Boston Public Library to undertake an initial feasibility study, and Mayoral and City Council approval was received by 1983. The multiphase project began in 1991 and was completed in 2002 and included renovation of several public services spaces, mechanical, electrical, and telecommunication systems, and historic restoration work including the courtyard. 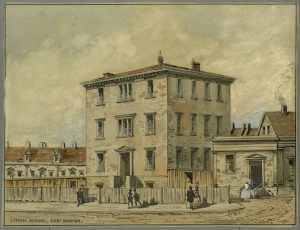 In the latter half of the nineteenth century, the library worked vigorously to develop and expand its branch system. Viewed as a means to extend the library's presence throughout the city, the branch system evolved from an idea in 1867 to a reality in 1870, when the first branch library in the United States was opened in East Boston. Between 1872 and 1900, twenty-one more branches began serving communities throughout Boston's diverse neighborhoods. Today, twenty-six branches serve the 670,000 residents of the City of Boston, with recent renovations and new branches in locations including Jamaica Plain, Chinatown, Roxbury, and Roslindale, with ongoing capital project investments designed to improve the BPL systemwide. 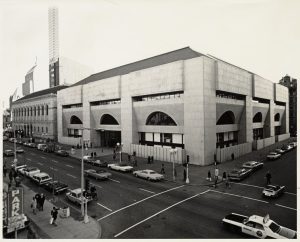 In 1972, the library expanded its Copley Square location with the opening of an addition designed by architect Philip Johnson, with collaboration from the Architects Design Group of Boston, who observed two requests: to maintain the existing roof line of the McKim building and to use material (Milford granite) that would harmonize with the exterior of the existing building. It was erected adjacent to the McKim building in order to allow patrons to move freely through the buildings. The Boylston Street Building occupies ten levels; four levels of public services, a staff administration and procession floor, four levels of book stacks for the research collection, and one level shared by utilities, maintenance, and stacks. Upon its completion, it contained 450,000 books on open shelves, an expanded children’s room and young adult collection, fifty-thousand foreign language items, a modern audiovisual department, and a 374-seat lecture hall named after benefactor Sidney Rabb.

The Central Library today is comprised of the McKim and Boylston Street Buildings, and, thanks to the addition, doubled to nearly one million square feet in size.

BPL in the Twenty-First Century 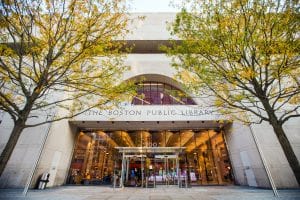 The award-winning Central Library Renovation of the Boylston Street Building, approved by Mayor Martin J. Walsh as a capital city project, was completed in July 2016 and designed by William Rawn Associates, Architects, Inc. Goals of the renovation included providing a welcoming and twenty-first century urban library experience to patrons and visitors from around the world, revitalizing programming and spaces, strengthening the two buildings’ connection, and reconnecting the building to the street and city. The transformed building features updates to the lower level, first and second floors, mezzanine, and Boylston Street Building exterior. Offerings include a state-of-the-art lecture hall, business library and innovation center, a new Children’s Library and Teen Central, a WGBH satellite news bureau and studio, a café, a high-tech community learning center, and more.