In early October, we reported on the progress of a major effort to make BPL’s manuscript collections more accessible online. That project, which is ongoing, aims to create new descriptions of as many manuscripts as possible and to bring those descriptions into the BPL online catalogs. The separate project described below complements that work.

Since the late 19th-century, the BPL has labored to build a catalog of its ever expanding collection of rare and historically significant manuscripts. Under even the best of circumstances, cataloging manuscript collections is slow, methodical work that requires extremely specialized expertise. While the work of cataloging can be slow, the standards that catalogers use, the technology involved, and even the forms that catalogs take can change, sometimes rapidly. As late as the early 2000s, BPL manuscript catalogers were still recording their work on 3 x 5" index cards. Each time a new manuscript was cataloged, all of the relevant information was typed onto an individual card, which was then filed away in the department's manuscript card catalog.

Today, this catalog fills 231 drawers and contains nearly a quarter million index cards. It holds so much information that when researchers or librarians need to use the collections, they still turn to this -- the manuscript card catalog -- and not to the BPL online catalogs, which are nowhere near as complete.

The Rare Books and Manuscripts Department is happy to announce that we have now taken a major step toward making this unique resource more accessible. We have digitized the entire manuscript card catalog and images of all the individual cards are now freely available online. With this project now complete, information about nearly every manuscript in the BPL's collections is available online in at least some form -- a major first.

In addition to digitizing the manuscript card catalog, we have also created a brand new research guide to help people find and use BPL manuscripts. This guide includes:

Visit the guide by clicking on the image below. To access the digitized cards, click on the "Digitized card catalogs" tab on the left side of the screen. 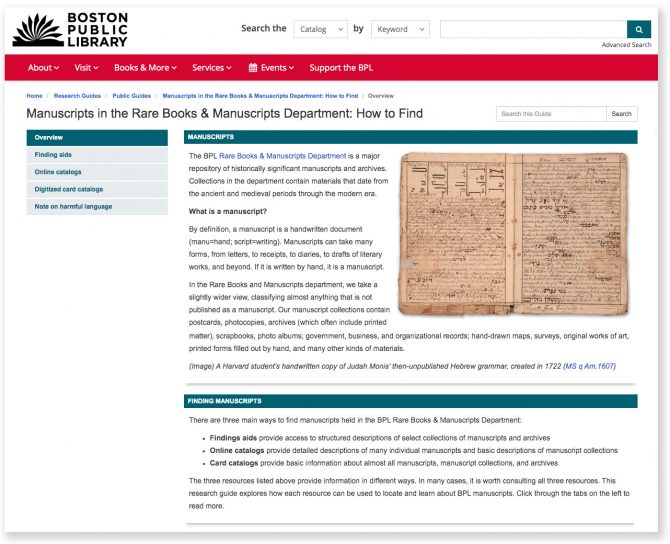 What is a manuscript?

Generally, anything written by hand is a manuscript -- from letters, to diaries, to drafts of literary works. In the Rare Books and Manuscripts department, we also classify as manuscripts most materials that are unpublished. This includes scrapbooks, photo albums, sketches, printed forms filled out by hand, telegrams, typed documents, etc. By definition, each individual manuscript is unique.

How does a card catalog work? 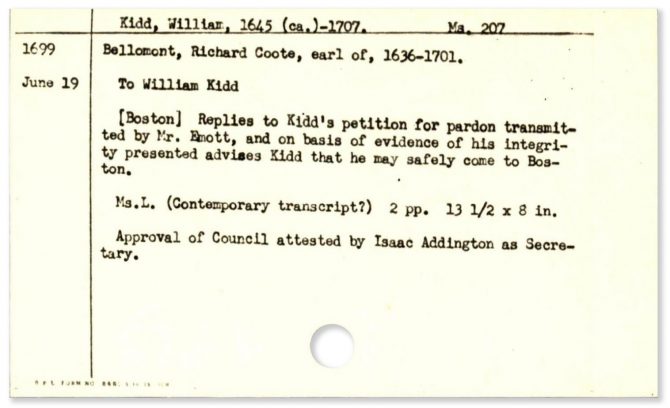 The card catalog was where all of a library's holdings were once listed. Card catalogs are files of 3 x 5" index cards, where each individual card describes a single item or group of items in a collection.

When they were still widely in use, the card catalog of a small library might have filled just a few drawers, while that of a large library could have filled thousands of drawers. But, when organized alphabetically by author or title, even extremely large card catalogs could be quickly and efficiently searched.

Before computers, card catalogs provided an easy way for readers and researchers to locate exactly what they were looking for in a library. Today, the vast majority of card catalogs have long-since been phased out. The BPL itself moved its main catalog online decades ago, but some card catalogs are still in use.

Until now, anyone who wanted to search through all the manuscripts in the collection had to come into the library itself and check each section of the card catalog in person.

Drawer-by-drawer, all of the cards in each section have been scanned, uploaded, and made fully accessible online. Getting to this point involved many steps.

First, we had to identify, purchase, and install a specialized production scanner capable of scanning index cards at an acceptably high quality. That work was completed thanks to staff in the BPL IT Department.

With the scanner in place, we then had to prepare the cards themselves. This involved removing every staple, paperclip, and piece of tape wherever we found them (a surprising amount of work!). We then fed the cards through the scanner in batches of approximately 100, creating high quality images of each card. Working drawer-by-drawer, this took approximately 70 hours. Next, we carefully labeled each file and uploaded it to Internet Archive. Finally, we created a new research guide on bpl.org, through which the digitized cards can be more easily used.

In a large library like the BPL, projects like this require collaborative work at many levels. Beyond Rare Books and Manuscripts, critical contributions to the project were made by staff in the IT Department, Content Discovery, Web Services, and Archives (to name a few).

With work now complete, the digitized manuscript card catalog can be browsed online in more or less the exact same way as the physical card catalog.

The image at the top of this post is part of the Boston Pictorial Archive and can be viewed online at Digital Commonwealth. The Bates Hall catalog was the primary card catalog for the entire Central Library.