To commemorate Edgar Allan Poe’s birthday on January 19, the BPL is featuring the Rufus W. Griswold Papers, which contains fifty-five letters by or to Edgar Allan Poe, including seven important ones to Griswold.

The long-simmering tension between Edgar Allan Poe (1809-1849) and Rufus W. Griswold (1815-1857) began when Griswold—literary critic, editor, and anthologist—published The Poets and Poetry of America (1842) in which three of Poe’s poems appeared. At the time, Poe was an established influential critic and writer, and he was displeased with Griswold’s lukewarm review of his poetry. In particular, Poe questioned the quality of poets that Griswold had included in the anthology, especially Henry Wadsworth Longfellow, whom Poe accused of plagiarism. Griswold, on the other hand, believed that Poe thought too much of himself. The tense relationship only worsened when Poe resigned from Graham’s Magazine, and was replaced by Griswold, who was paid a higher salary.

Surprisingly, Griswold offered Poe ten dollars to review his very popular anthology. Poe considered this a bribe and, although his review was favorable, it wasn’t as positive as Griswold wanted. From 1843-1845, Poe toured the East coast giving highly successful lectures on American poetry. Naturally, he discussed The Poets and Poetry of America, and he publicly declared that Griswold published his friends’ poetry rather than good poetry. During this time, Griswold was planning a new anthology, The Prose Writers of America. Griswold knew that regardless of his criticism, Poe was too popular to be excluded (click to see images in full): 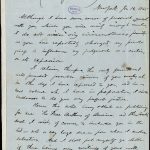 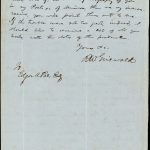 In the spirit of reconciliation, Poe responded on January 16 stressing that his comments about the anthology were “based on the malignant slanders of a mischief-maker by profession” rather than any personal animus.

At the end of January 1845, Poe’s iconic poem “The Raven” was published in The Evening Mirror to immediate critical acclaim. It was also one of the poems Poe submitted to Griswold for inclusion in the anthology. In a letter dated April 19, Poe continued to insist that it was Griswold’s judgment rather than his character that he was challenging.

Their uneasy truce lasted long enough for Poe to ask Griswold for fifty dollars to help keep his magazine, The Broadway Journal, in print. Griswold gave him twenty five dollars instead. In 1847, Griswold published The Prose Writers of America in which he criticized Poe’s editorial skills. Shortly after, Poe shot back with a satire called The Poets and Poetry of America.

As if their literary competitiveness was not enough, both men were romantically attracted to Frances Sargent Osgood (1811-1850). She was a prolific writer whose poems appeared in many popular magazines of the day, including The Broadway Journal. Nothing ever came of either man’s infatuation. Although Poe broke off their friendship and Griswold edited a volume of her poetry, Osgood remained fond of Poe until her death.

Edgar Allan Poe died on October 7, 1849. A few days later, Griswold wrote an obituary in the New-York Daily Tribune under the name of “Ludwig.” In it, he began to seriously undermine Poe’s reputation. Griswold went on to edit and publish a largely inaccurate posthumous collection of Poe’s works in which he included a biographical sketch titled "Memoir of the Author." In this piece, Griswold made false claims about Poe’s character, including drug addiction; which sealed Poe’s negative reputation for many years. However unconventional Poe might have been, his contribution to the American literary scene has long outlived Griswold’s attempts to malign him and the quality of his work.

Rufus Griswold (1815-1857) was the editor of Graham's Magazine and the publisher of American literature and poetry in the mid-19th century. This collection contains the near entirety of Rufus Griswold's correspondence between the years 1834 and 1857. In particular, it reflects his business dealings as editor of Graham's Magazine and publisher of The Poets and Poetry of America. Correspondence is primarily letters to Griswold from poets, authors, and other editors regarding publications and reviews. The letters document his relationships -- both professional and personal -- with his contemporaries. Most notable is the correspondence between Griswold and Edgar Allan Poe.

The majority of the letters are related to either Graham's Magazine or The Poets of America and include requests for publication or critical review. While the correspondence is business in nature, the letters also discuss the personal lives of such people as Rufus Griswold, Edgar Allen Poe, Elizabeth Ellet, and Frances Sargent Osgood.

Poe was born in Boston, but he didn’t live in the city, except for a brief time spent on Fort Independence in Boston Harbor. He had no love for the place or its literary tradition. However, his first collection, Tamerlane and Other Poems was published in Boston, as was “The Tell Tale Heart”.  Consequently, there are many places in the city where he can be found:

The Poets and Poetry of America

The Raven - The Simpsons

The Raven - read by Christopher Walken