This blog post commemorates the 100th anniversary of the Sacco-Vanzetti Defense Committee (SVDC), established by Aldino Felicani in May 1920 to defend Nicola Sacco (1891-1927) and Bartolomeo Vanzetti (1888-1927), Italian immigrants arrested for the murders of Frederick Parmenter and Alessandro Berardelli in Braintree, Massachusetts.

The case was highly controversial in its day and remains so today due to accusations of an unfair trial held during the first Red Scare in the United States, when immigrants were viewed with hostility and suspicion. Sacco and Vanzetti were found guilty of the crimes and executed in 1927.

On April 15, 1920, paymaster Frederick Parmenter and security guard Alessandro Berardelli were robbed and murdered at the Slater-Morrill Shoe Company factory in Braintree, Massachusetts. On May 5, Sacco and Vanzetti were arrested. Four days later,  Aldino Felicani (1891-1967) established the Sacco-Vanzetti Defense Committee (SVDC) on May 9. Felicani and Vanzetti had worked together on the anarchist newspaper Cara Compagna and were good friends. Felicani also worked as printer at La Notizia, and he used the newspaper to publicize the arrests and appeal for contributions to the defense fund.

The purpose of the Sacco-Vanzetti Defense Committee was two-fold: to keep the names of Sacco and Vanzetti in the public consciousness and to free them from jail. The committee raised money to pay for the men’s legal expenses and published and disseminated news items that refuted every aspect of prosecution’s case. In addition to serving as the treasurer, Felicani played the role of liaison between a group of Italian anarchists and lawyers they did not trust. Before the end of 1920, Felicani began publishing L’agitazione (The Agitation), the committee's official organ.

In August 1920, Carlo Tresca an Italian anarchist and editor of the socialist newspaper Il Proletario, strongly recommended that Felicani hire Fred Moore, an attorney for the International Workers of the World. Moore had successfully defended union leaders Arturo Giovannitti and Joseph Ettor in the Lawrence textile strike (Bread and Roses Strike). On July 14, 1921 Sacco and Vanzetti were found guilty of robbery and murder.

At the end of 1921, Judge Webster Thayer denied a motion for a new trial. Over the next 18 months, Fred Moore and the defense team filed seven motions for new trials. During that time, the committee, together with radicals, civil rights leaders and activists such as Mary Donovan, Roger Baldwin, Elizabeth Gurley Flynn, and Eugene Lyons, all worked tirelessly to save Sacco and Vanzetti. Moreover, many powerful labor unions contributed to the cause. Click on any of the images below to see larger versions. 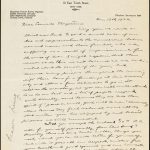 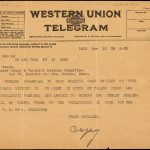 Frank Catalano CableFrank Catalano (Amalgamated Clothing Workers of America assembled with other workers delegations in New York) typed cable (copy) to Nicola Sacco, New York, March 12, 1923 sending the message from the mass meeting that he is to remain courageous and that victory is in sight. MS 2030 Box 1, Folder 4. 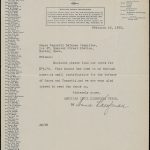 Neither Sacco nor Vanzetti ever fully trusted Fred Moore. Tensions between the men, the committee and Moore finally caused him to resign in September 1924. William Thompson became chief counsel. Judge Webster Thayer denied all motions for a new trial on October 1, 1924. For the next three years, the committee was restless in its work. Thompson made numerous attempts to overturn the verdict and the case sparked a strong international response. The death sentence was handed down on April 9, 1927 and was met with world-wide protests. Governor Alvin T. Fuller established a special committee to investigate the possibility of clemency, which was denied. Click on any photos below to see them in a larger size.

Sacco and Vanzetti wrote their last letter to the committee on August 21, 1927 not only to thank the members for their years of effort, but also to console them. 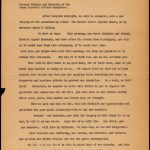 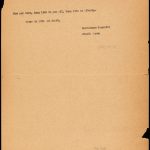 From the day Aldino Felicani founded the SVDC until after the deaths of Sacco and Vanzetti 1927, the SVDC headquarters was located in Boston’s North End, first on 32 Battery Street and then on 256 Hanover Street.

The Aldino Felicani Sacco-Vanzetti Collection spans the years 1914-1967, with the bulk dating from 1920-1927. The collection documents the efforts and activities of the Sacco-Vanzetti Defense Committee including the committee's propaganda campaign, Fred Moore's investigation and defense strategies, post-trial proceedings, and the execution of the two men. The efforts, financial and otherwise, made by labor unions, defense organizations, and individuals on behalf of Sacco and Vanzetti are also documented. In addition, Sacco and Vanzetti’s thoughts regarding the guilty verdict and their impending execution are included.

Interspersed with Felicani's correspondence are several documents which contribute to the history of the committee and Felicani’s role in it. These documents include a piece Felicani wrote about Luigia Vanzetti after her death. It is the only documentation that exists in the collection specifically about her (in Italian).The documents also include the history of Gutzon Borglum’s memorial sculpture, and the legal document giving Felicani power of attorney by Luigia Vanzetti. That document gave explicit instructions concerning the dispersal of Bartolomeo’s ashes.

The trial of Sacco and Vanzetti, their deaths, and funeral are documented through photographs, newspaper clippings and press releases, arm bands, and original art work. Also contained in the series are a number of broadsides from unions and Sacco-Vanzetti defense organizations in Europe and South America. These represent the international response to the plight of the two men.

For more information, please refer to the collection finding aid and selections of digitized materials on Digital Commonwealth.

The Passion Of Sacco And Vanzetti

In Search of Sacco and Vanzetti 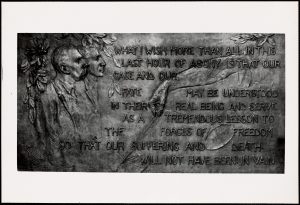 Ben Shahn and The Passion of Sacco and Vanzetti

The Red Scare and Sacco and Vanzetti