On Thursday, Bibliocycle was on the way to the Fenway Victory Gardens for Movie Night. We were so excited for a night of food, fun, and film under the stars, but on the way, one of the trailer wheels suddenly sprang a flat. The person pulling the trailer pulled over to the side of the road to inspect what had suddenly happened. Knowing there was no way to pull the trailer the rest of the way with a flat, she started the long uphill trek back to the Parker Hill Branch with a trailer that had one flat and her bike. She cut through the Simmons College campus, sweating profusely, she called her riding partner that was coming from another BPL location. 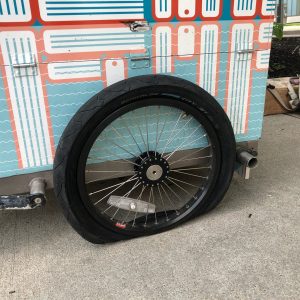 When her co-rider appeared moments later, she had a surprise. "I have AAA!" 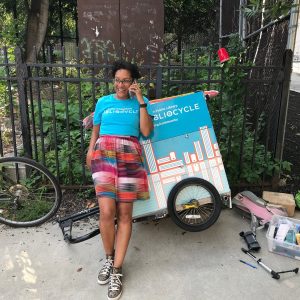 While co-rider was on the phone learning the devastating news that the service center call representative was giving her (AAA means motorized bikes not bicycles), the other rider was still thinking, we don't need AAA. We can do this ourselves! In short, co-rider was able to keep the trailer weight off of the flat while the other rider worked on removing the tire, and tube. She found the slash in the tube, didn't think there was enough tape to repair it, and so put a new tube in. It only took an hour to figure everything out!