Rosh Hashanah is the Jewish new year. It takes place during the fall, at the beginning of the month of Tishrei, which is the seventh month of the Jewish year. Rosh Hashanah is both a time of rejoicing and of serious introspection. It is a time to celebrate the completion of another year while also taking stock of one’s life.

The two days of Rosh Hashanah usher in the Ten Days of Repentance (Aseret Yemei Teshuvah). They are also known as the Days of Awe (Yamim Noraim), which culminate in the major fasting day of Yom Kippur, the Day of Atonement. The Days of Awe represent the climax of a longer process. Starting at the beginning of the previous month, called Elul, the shofar is traditionally sounded at the conclusion of the morning service. The shofar is a ram’s horn that makes a trumpet-like sound. The shofar is intended as a wake-up call to prepare for the Tishrei holidays. One week before Rosh Hashanah, special petitionary prayers called Selichot are added to the ritual. Rosh Hashanah itself is also known as Yom Hadin or the Day of Judgment. On this day G-d opens the Books of Life and Death, which are then sealed on Yom Kippur.

The prayer book for the High Holidays is called the Mahzor. Three unique sets of prayers are added to the morning service during Rosh Hashanah. These are known as Malkhuyot, which address the sovereignty of God, Zikhronot, which present G-d as the one who remembers past deeds, and Shofarot, in which we stand in nervous anticipation of the future.

To celebrate Rosh Hashanah at home, make sure you have honey on hand. The challah, a round bread symbolizing the eternal cycle of life, is common at celebrations. The challah is traditionally dipped in honey, symbolizing the hopes for a sweet New Year. The same is done with apples, which are made even sweeter with the addition of honey. 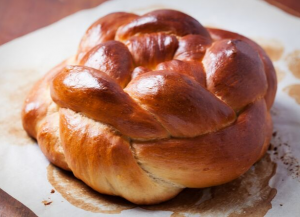 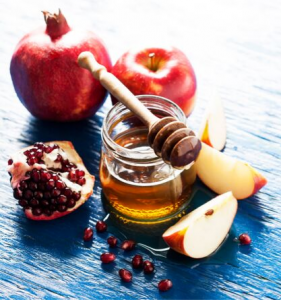 In Judaism, this is the time of year during which followers atone for both individual — and on Yom Kippur, communal — sins committed over the course of the previous year, before G-d literally closes the books on the year and inscribes fates for the coming year. Shana Tova!

Check out these children's titles about Rosh Hashanah:

Is It Rosh Hashanah Yet?