Ireland’s musical tradition goes back well over a thousand years. For nearly all of this time, it’s been an oral tradition passed on from one musician to another. It’s only been fairly recently that the music has been recorded in written and audio forms. The music can be found played in homes, pubs, reception halls and concert halls, but many would argue that the best place to see it is in more casual settings. It’s music to listen to, to dance to, to laugh with, and to cry with. Whatever the occasion, there is a song or instrumental piece that will fit the mood.

Ireland has several different styles of song: some sung in Irish, some in English, and some a mix of the two. Some of the ones that were sung in Irish are no longer performed. These include the death lament (caoineadh na marbh) and the Fenian or Ossianic heroic lay (laoi Fiannaíochta). One form that still exists is the lilt (portaireacht), which is dance music sung to non-word syllables (eg.. deedle-deedle-doo). There are many different types of songs used for different occasions, such as songs of leaving, ballads, and the lilts. Singers often use lots of expressive, small changes in tempo to evoke more feeling in the songs, and add ornamentation to basic melodies.

The instrumental music is typically dance music. The instrumental music types are jigs (in 6/8 meter), reels (in 4/4 or 2/2 meter), hornpipes (in 4/4 meter), polka (in 2/4 meter), and the march (in 2/4 or 6/8 meter). Of these, the reel is the most popular.  The music may be played by a solo instrumentalist, or a group of musicians. The music is fast and played with lots of ornamentation. These ornaments are used to provide variations when the tune repeats during one of the dances.

Besides the dance music, instrumentalists will sometimes play “slow airs” that are taken from songs and meant for listening, not dancing. These are usually played in 3/4 meter with lots of subtle changes in tempo for more expressive music.

The most popularly used instruments in Irish traditional music are the fiddle, the wooden, side-blown flute, tin whistle, uilleann pipes, concertina, and diatonic accordion. Percussion isn’t used frequently, but when it is, they usually use the bodhrán (a frame drum), bones, or spoons. The harp, a symbol of Irish national identity, has been played in Ireland for over a thousand years and has had a long oral tradition associated with it. By the 19th century, however, the use of the harp was in decline. It wasn’t until the 1970s that harp playing became reclaimed, and it is now much more common.

Learn more about Irish music with these items:

See You at the Hall

Folk Music and Dances of Ireland 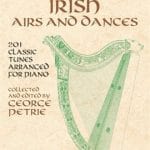 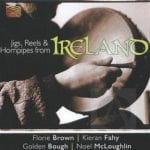 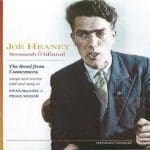 Joe Heaney: The Road from Connemara 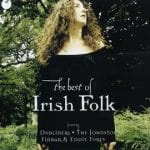 The Best of Irish Folk