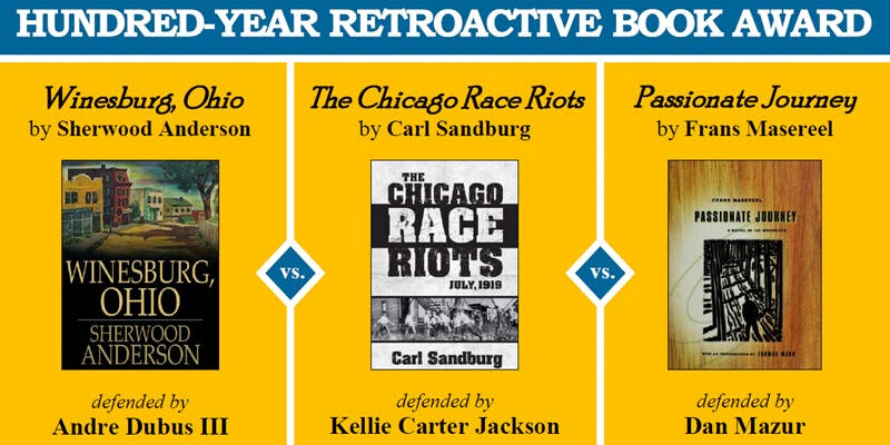 The Associates of the Boston Public Library will conduct its Hundred-Year Retroactive Book Award competition to weigh the enduring literary merits of bestsellers published in 1919. This year’s contenders are Sherwood Anderson's Winesburg, Ohio, Frans Masereel's Passionate Journey, and Carl Sandburg's The Chicago Race Riots. The books will be championed by authors Andre Dubus III, Dan Mazur, and Kellie Carter Jackson, respectively. WBUR’s Christopher Lydon will moderate the irreverent debate, after which the audience will vote to determine the winner of the Retroactive Book Award of 1919. A reception with the panelists will follow.

The lighthearted event will take place on Wednesday, November 6, 2019 at 6:30 p.m. in the Abbey Room of the Boston Public Library in Copley Square. It is free to attend and open to the public. Please register for this fun event by visiting: http://BookAward.Eventbrite.com.

Speaking for the Novels:
Kellie Carter Jackson is the Kanfel Assistant Professor of the Humanities in the Department of Africana Studies at Wellesley College, and the 2019-2020 Newhouse Faculty Fellow for Wellesley’s Center of the Humanities. She earned her B.A at Howard University and her Ph.D from Columbia University. She is the author of Force & Freedom: Black Abolitionists and the Politics of Violence and co-editor of Reconsidering Roots: Race, Politics, & Memory. Her latest manuscript is “Losing Laroche: the Story of the Only Black Passenger on the Titanic.”

Andre Dubus III is the author of seven books, including the New York Times’ bestsellers House of Sand and Fog, The Garden of Last Days, and his memoir, Townie. His most recent novel, Gone So Long, has received starred reviews from Publisher’s Weekly and Library Journal and has been named on many “Best Books” lists. Mr. Dubus has been a finalist for the National Book Award, and has been awarded a Guggenheim Fellowship, The National Magazine Award for Fiction, two Pushcart Prizes, and is a recipient of an American Academy of Arts and Letters Award in Literature. He teaches full-time at the University of Massachusetts Lowell.

Dan Mazur is a published comic artist, the co-founder of The Boston Comics Roundtable, and co-director of the Massachusetts Independent Comic Expo. He is the co-author, with Alexander Danner, of Comics: A Global History, 1968 to the Present, exploring the history of comics around the world from the late 1960s to the dawn of the 21st century.

About the ASSOCIATES OF THE BOSTON PUBLIC LIBRARY
The Associates of the Boston Public Library is an independent nonprofit dedicated to preserving the Boston Public Library’s Special Collections of rare books, manuscripts, prints, photographs, musical scores and other items of literary, historic and cultural importance. The Associates makes grants to ensure continued public access to these irreplaceable treasures by underwriting their conservation, cataloging, digitization, and exhibition. Through these efforts, the Associates aims to help the Boston Public Library fulfill its most essential mission of providing top quality, free educational resources to the public, as well as preserving knowledge, culture, and history for the benefit of all.