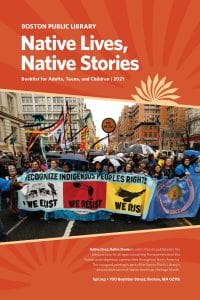 BOSTON, October 25, 2021—This November, Boston Public Library will honor Native American Heritage Month with its first annual “Native Lives, Native Stories” booklist and special events. The booklist features 63 works published in the last year concerning the experiences of the Native and Indigenous communities throughout North America. Copies are now available at all library locations, and the list also appears on the BPL website. Events will also be held including author talks and a book group discussion, and pieces from the BPL collection will be highlighted on social media throughout the month.

Curated by staff librarians from the Central Library, the Connolly Branch, and the Kirstein Business Library & Innovation Center, “Native Lives, Native Stories” is the BPL’s first booklist honoring Native American Heritage Month and will be published annually. The selected books are either by Native and Indigenous authors or about Native history and culture. The list features fiction, nonfiction, and poetry books for adults, teens, and children and includes a brief summary of each title and the BPL call number.

Earlier this month, Mayor Kim Janey established the second Monday of October as Indigenous Peoples Day in Boston, following a collaboration with local Indigenous organizations. The historic move was a significant step toward recognizing Indigenous residents and increasing dialogue with local tribes to foster reconciliation and support for the rights of Indigenous people.

The BPL will also celebrate Native American Heritage Month with special author talks and a book discussion group. Award-winning author and Citizen of the Nipmuc Tribe of Massachusetts Larry Spotted Crow Mann will discuss his book Drumming & Dreaming, an inspiring and healing journey of Algonquian Tales of the Nipmuc Tribe. Afro-Indigenous historian Kyle T. Mays will also join the BPL in conversation about his book An Afro-Indigenous History of the United States, the first intersectional history of the Black and Native American struggle for freedom in our country that also reframes our understanding of who was Indigenous in early America. Other special events include an author talk by historian David J. Silverman (This Land Is Their Land: The Wampanoag Indians, Plymouth Colony, and the Troubled History of Thanksgiving) in honor of the 400th anniversary of the first Thanksgiving, and a book group discussion of There There by Native author Tommy Orange.

Notable items from the Library's collections depicting Native and Indigenous history and culture will be featured on BPL social media accounts throughout the month of November. These items include photographs of the Passamoquoddy Tribe from our Leslie Jones Collection, as well as a promised gift to the BPL of photographs taken by local activist John Willis, who dedicates his practice to documenting tribal sovereignty and resistance. We will also share daily recommendations from the Native Lives, Native Stories booklist on Twitter. Follow along on Twitter, Facebook, and Instagram.

About the BOSTON PUBLIC LIBRARY

The Boston Public Library of today is a robust system that includes the Central Library in Copley Square, 25 neighborhood branches, the Norman B. Leventhal Map and Education Center, the Kirstein Business and Innovation Center, and an archival center, offering public access to world-class special collections of rare books, manuscripts, photographs, and prints, along with rich digital content and online services.

The Boston Public Library serves nearly 4 million visitors per year and millions more online. All of its programs and exhibitions are free to all and open to the public.

The Boston Public Library is a department of the City of Boston, under the leadership of Mayor Kim Janey. To learn more, visit bpl.org.