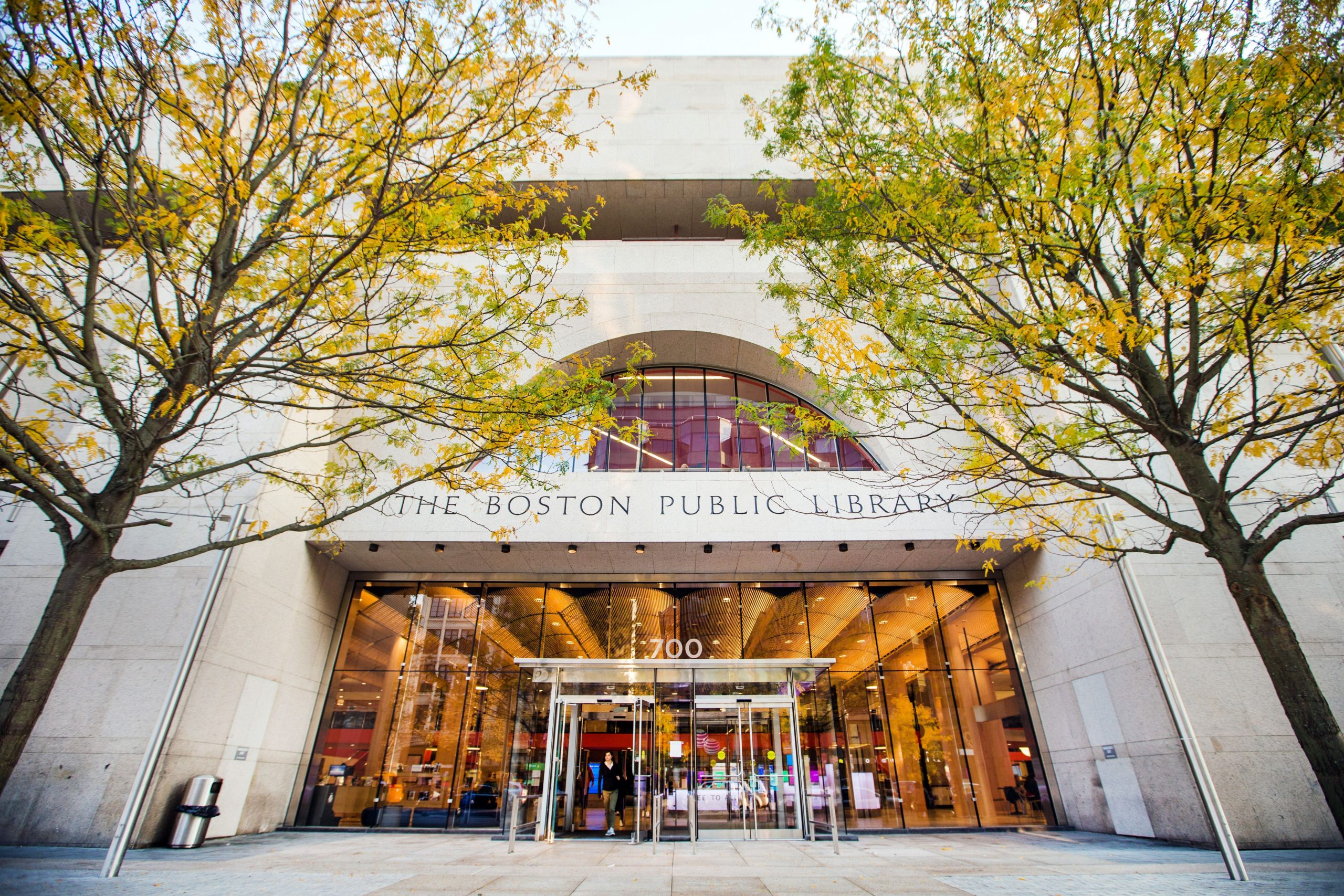 The Nominating, Governance and Development Committee of the Boston Public Library’s Board of Trustees today celebrated outgoing Board Chair Robert Gallery, and welcomed the appointment by Mayor Martin J. Walsh of five new trustees. Once the new Trustees are sworn in, they will then be seated and eligible to vote at the next full meeting of the Library’s Board scheduled for March.

“For 170 years, the Board of Trustees has played a critical leadership and oversight role in ensuring the Boston Public Library has been able to fulfill its mission to serve the people of Boston, free to all,” Mayor Walsh said. “These five new appointees will ensure that the Library’s Board of Trustees continues to be a strong partner to the Library’s leadership, so the Library can continue to serve as the critical resource it is to the people of the City of Boston.

“I especially want to thank Bob Gallery for his leadership of the Library Board. His long history of leadership in the Boston community made him the perfect fit for this role, and his service has done so much to benefit everyone who has used the library – and future patrons of the library as well.”

Elected as Board President in 2015, Bob Gallery oversaw the Library’s Board of Trustees through a period of transition between library presidents, helped launch the Boston Public Library Fund, and was instrumental in securing a series of capacity grants that enabled the Fund to begin operations.

Gallery was seen by Library staff as a thoughtful, strong advocate for the BPL in both the public and private sectors, and as an experienced partner for the library’s significant transition challenges.

“Bob’s calming presence on the board was instrumental in helping us navigate through some turbulent times,” said BPL President David Leonard.  “This was because Bob not only cared deeply about the library’s staff, but also cared about the communities we served, always listening carefully to public comment, no matter how controversial the topic.  I am personally grateful for Bob’s support; his faith in me and in the vision for the library that has allowed me to grow into the role of president.  We will miss his calm presence at the helm of the Board, but he has left behind a board prepared to execute on the challenges of the future.”

The five new trustees fill critical roles on the 15-member BPL Board, bringing their individual strengths from the worlds of finance, policy, arts and culture, and State representation.  In addition to representation from the BPL Fund, for the first time in its history, the Library will also have representation from two of its key affiliates, the Norman B. Leventhal Map and Education Center and the Associates of the Boston Public Library, seated on its board.  The five new trustees were appointed by letter submitted to the City Clerk on January 25, 2021; their terms will expire on May 1, 2025.

The Board of Trustees is scheduled to elect a new chair at its March meeting.

The new trustees are:

Ms. Bal also has more than 25 years of experience at private law firms as a public finance attorney and as an appointed public official, having served as the Commissioner of Revenue for Governor Deval Patrick from 2007-2011.  As Commissioner, she was responsible for overseeing a 2,000-person agency with three lines of business: Tax Administration, Child Support Enforcement and the Division of Local Services overseeing city and town finances.

She currently sits on the Board of the Gaudino Fund at Williams College, the Institute for Justice and Democracy in Haiti, New Hope Community Capital, South Asian Bar Association of Greater Boston, Advisory Board member and the Massachusetts Nonprofit Network. She has also served on the Boston Bar Association Council, the Supreme Judicial Court’s Access to Justice Commission, and was the past Treasurer of the Boston Public Market.

Navjeet graduated from Williams College with a B.A. in Philosophy, and received her law degree from Northeastern University School of Law.

Mr. Berman is the general counsel of the Board of Bar Overseers of the Supreme Judicial Court, having been appointed by the justices of Court in 2017.  As general counsel, Mr. Berman oversees the enforcement of the Massachusetts Rules of Professional Conduct, the code of ethics for Massachusetts lawyers.  He writes and speaks frequently on legal ethics.

Prior to holding this position, Mr. Berman practiced commercial litigation for more than twenty-five years and worked exclusively as a mediator and arbitrator for two years.  In connection with his position at the BBO, Mr. Berman serves on the board of Lawyers Concerned for Lawyers, an agency funded by the legal profession to assist lawyers in need of mental health services.  He is the President-Elect of the National Council of Lawyer Disciplinary Boards and serves on the editorial board of the Massachusetts Law Review.

In addition to his legal work, Berman is involved in several philanthropic endeavors.  He recently completed two terms on the board of the Associates of the Boston Public Library, which works to preserve the library’s extensive collection of rare books, prints, and manuscripts.  He is the Chair of the Conservation Commission in his hometown of Weston, Massachusetts.

In addition, Mr. Berman serves as the Chair of the Anti-Defamation League's New England Regional Board, and serves on a national level as chair of the ADL’s Legal Affairs Committee.  In that position, he oversees the League’s litigation activity, including the filing of amicus curiae briefs in state and federal appeals courts.

A lifelong resident of Dorchester, Ms. Linehan is the Chief of Policy and Planning for Boston Mayor Martin J. Walsh. In this role, she advises the Mayor on a wide array of issues, from housing to economic mobility and workforce development to substance use disorder. She and her team coordinate policy initiatives across cabinets and departments. She led the efforts to create several of the Mayor’s signature departments, including the Office of Strategic Partnerships, the Office of Resilience and Racial Equity, and the Office of Recovery Services. She also led the effort to elevate Arts & Culture to a cabinet-level position, fulfilling an early campaign promise of Mayor Walsh’s.

Before joining the administration in 2014, she owned and operated Ashmont Media, a public relations company that served Boston arts organizations. She co-owns Ashmont Records, an independent record label.

She was previously the Senior Vice President of Artists and Repertoire for Sub Pop Records, where she identified and cultivated talent, supervised recording sessions, and managed tours.

For most of her life, she has been a community activist and organizer volunteering on a range of political and social justice campaigns. Linehan holds a B.A. and an M.A. in American Studies from the University of Massachusetts Boston, where she received the Dr. Robert W. Spayne Research Grant for study at the Country Music Hall of Fame. Her master’s thesis, “The Day My Mama Socked it to the Harper Valley PTA: Country Music Womanhood in the Second Wave of Feminism,” received the American Studies Book Award from UMass Boston. She is the co-founder of the Dorchester Arts Collaborative; an animal advocate and leader in the fight to end breed-specific legislation; and serves on the board of Interim House, a residential substance use disorder treatment center.

As a child, she spent a lot of afternoons at the Adams Street Branch of the BPL, and is grateful for the wonderful staff at service at Lower Mills, her current local branch.

Senator Rush is the Majority Whip of the Massachusetts State Senate, serving the Norfolk & Suffolk District, which includes five neighborhoods in the city of Boston and the towns of Dedham, Dover, Needham, Norwood, and Westwood in Norfolk County. Prior to being elected to the Senate, Rush served as a member of the Massachusetts House of Representatives where he was Chair of the Boston Delegation.

Senator Rush is a former high school history teacher, an Iraq War Veteran, and a Lieutenant Commander in the United States Navy Reserves. He holds a JD from Southern New England School of Law and holds both a MA Degree with distinction and a BA Degree from Providence College. He is a member of Phi Alpha Theta, the International Honor Society for Historians, serves as an Adjunct Instructor of History, and is also an Eagle Scout.

Currently, Senator Rush sits on the national Board of Trustees for the US Navy Seabee Historical Foundation. He and his wife live in West Roxbury with their two children, who attend Boston Public Schools.

Christian J. Westra is a partner at Ropes & Gray LLP.  He represents private equity firms and institutional investors in mergers and acquisitions, leveraged buyouts and other investments.  Prior to joining Ropes & Gray, Christian worked as a management consultant with the Monitor Group and served as a Rosenthal Fellow in the Office for European and NATO Policy at the Pentagon.

In response to the COVID-19 pandemic, Christian led the foundation of the COVID Relief Coalition, a private and public sector partnership to help non-profits and small businesses navigate the economic downturn prompted by COVID-19.

Mr. Westra serves on the boards of directors of the Norman B. Leventhal Map & Education Center at the Boston Public Library and the United Way of Massachusetts Bay and Merrimack Valley.  In addition, he leads the Ropes & Gray Pan-Mass Challenge team.

Mr. Westra lives in Boston with his wife, Sophie, and his two sons, Jack and George.  He is a graduate of Harvard College and Boston College Law School and holds degrees from the University of Cambridge and the Fletcher School of Law and Diplomacy.