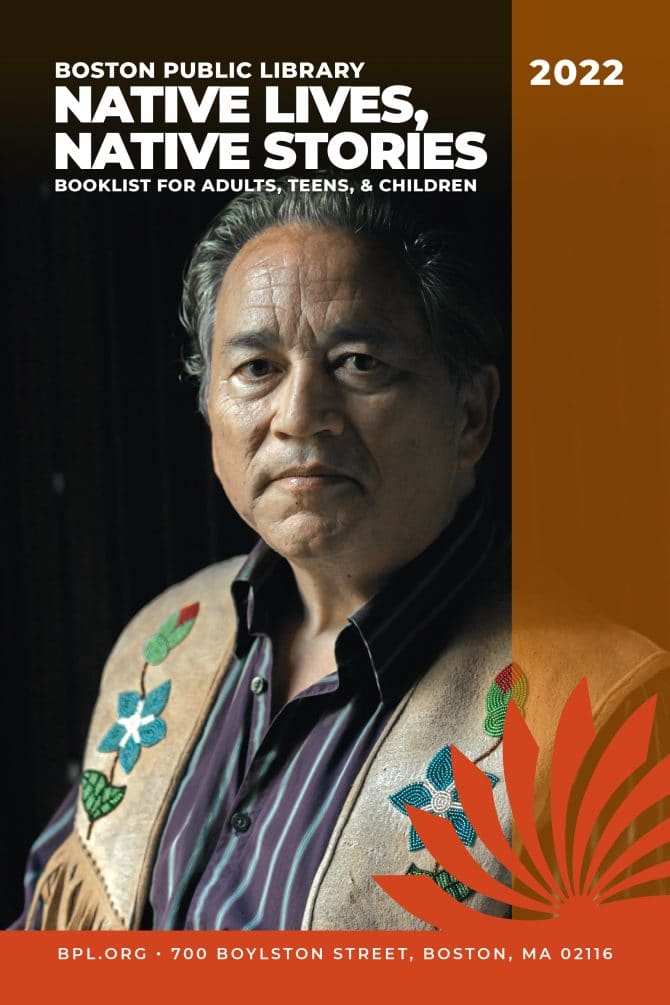 The “Native Lives, Native Stories” booklist is comprised of 63 recently published titles focusing on the experiences of the Native and Indigenous communities of the United States. Compiled by staff librarians from the Central Library, the Chinatown Branch, the Connolly Branch, and the Roslindale Branch, “Native Lives, Native Stories” features selected books written either by Native and Indigenous authors or about Native history and culture. The list includes fiction, nonfiction, and poetry books for adults, teenagers, and children by renowned authors such as Cynthia Leitich Smith, Joseph Bruchac, Stephen Graham Jones, Louise Erdrich, and Margaret Verble. Each book on the list contains a brief summary and is accompanied by the book cover artwork as well as classification information. In addition to print books, select titles are also available as eBooks and audiobooks.

“The Boston Public Library is proud to help celebrate these rich cultures, traditions, and histories, lifting up voices that are often missing from our traditional lexicon,” said David Leonard, President of the Boston Public Library. “They are part of our shared history, and it is our hope that greater learning and understanding found in the ‘Native Lives, Native Stories’ booklist, together with our programs and events, will help increase our awareness and appreciation of Indigenous peoples in our society.”

Along with the “Native Lives, Native Stories” booklist, the Boston Public Library also pays tribute to the way of life, languages, and legacy of our nation’s first peoples by hosting film screenings and various children’s activities. These programs will include a screening of the film Gather, which explores the growing movement amongst Indigenous Americans to reclaim their spiritual and cultural identities through food sovereignty; a film screening and discussion of Bounty, part of the Dawnland film series, which reveals the hidden story of the Phips Proclamation, one of many scalp-bounty proclamations used to exterminate Native people in order to take their land in what is now New England; and the West End Branch will host a month-long film series with movies such as Smoke Signals, Indian Horse, and Once Upon a River. Notable pieces depicting Native and Indigenous history and culture from the BPL collection will also be highlighted on the BPL’s social media platforms during November.

Copies of the “Native Lives, Native Stories” booklist are now available at all library locations, and the list and information about other programs also appear on the BPL website.

About the BOSTON PUBLIC LIBRARY

The Boston Public Library of today is a robust system that includes the Central Library in Copley Square, 25 neighborhood branches, the Norman B. Leventhal Map and Education Center, the Kirstein Business and Innovation Center, and an archival center, offering public access to world-class special collections of rare books, manuscripts, photographs, and prints, along with rich digital content and online services.

The Boston Public Library serves nearly 4 million visitors per year and millions more online. All of its programs and exhibitions are free to all and open to the public.

The Boston Public Library is a department of the City of Boston, under the leadership of Mayor Michelle Wu. To learn more, visit bpl.org.