Over 30 years ago, at 1:24 am on March 18, 1990, two men dressed as police officers walked into the Isabella Stewart Gardner Museum. 81 minutes later they walked out with $200 million worth of artwork (now valued at $500 million). They forced the night guards into the basement, and duct-taped their hands, eyes, and ankles. The guards were not discovered until the new shift came to relieve them around 8 am. When the police examined the gallery, they noticed that the missing paintings had been cut from the frames, instead of carefully removed. None of the pieces have ever been recovered.

13 pieces were stolen from the museum. The value of the pieces makes this the biggest art theft in the history of the world. Click on any of the images below to see a larger version and learn more. The museum is offering $10 million in reward money for information leading to the recovery of the stolen items. If you have verifiable information about the location of any of these items, please contact the Isabella Stewart Gardner Museum security chief Anthony M. Amore at reward@gardnermuseum.org. 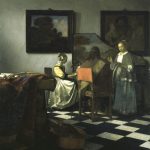 1. ‘The Concert’ by Johannes Vermeerc. 1663-1666. This painting is considered the rarest and most valuable of the stolen items, because there are so few Vermeer paintings in existence. 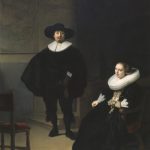 2. ‘A Lady and Gentleman in Black’ by Rembrandt van Rijnc. 1633. This painting is probably Rembrandt’s first double portrait (meaning two subjects). When the painting was x-rayed it was discovered that there used to be a child near the lady in the painting. But Rembrandt painted over them. It is believed that the child had died, and it was too painful for the couple to have them in the painting. The painting itself is quite large, about 4 feet by 3.5 feet wide. 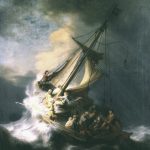 3. ‘Christ in the Storm of Galilee’ Rembrandt van Rijn.c. 1633 This was Rembrandt’s only seascape. It shows Jesus and his disciples in a boat in the height of a violent storm. Some are panicking, some are trying to hold the boat together. Once disciple has Rembrandt’s face, and is staring at the viewer. 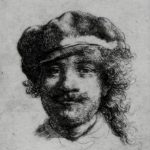 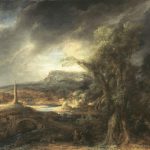 5. ‘Landscape with Obelisk’ by Govaert Flinck c. 1638. While this landscape looks like a Rembrandt, but it’s by Govaert Flinck. The obelisk is the focus of the painting, but it appears much smaller than the tree in the foreground. The obelisk seems to represent something. Or why else would it be in the middle of this mostly empty landscape? But, unfortunately, we do not know the answer. 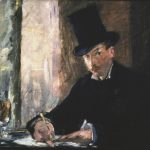 6. ‘Chez Tortoni’ by Édouard Manetc. 1875 Manet was in his 40s when he painted this. His later works were often of still life, but he also liked to paint images of cafe life. These paintings form almost a social history of Paris in the late 1800s. 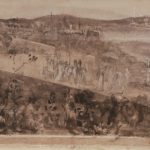 7. ‘Cortège Sur Une Route Aux Environs De Florence’ by Edward Degasc. 1857 This drawing in pencil shows a carriage pulled by horses and a woman holding an umbrella high above three women who appear to be dancing 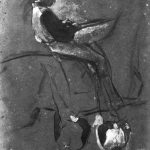 8. ‘Three Mounted Jockeys’ by Edward Degas.c. 1885 – 1888. This ink drawing with some oil paint shows three jockeys. One jockey is more prominently displayed. The other two jockeys are harder to see because they are upside down. 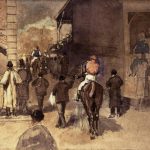 9. ‘La Sortie De Pesage’ by Edward DegasDate unknown. The title of this piece means “Leaving the Paddock.” This piece is a watercolor. It shows two horses and their jockeys being led into the track. 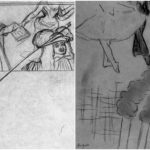 10 & 11. Two studies for “an artistic soiree” by Edward Degasc.1884. These are both charcoal sketches. The one on the left is less finished than the right. In the top left, there is a couple pointing their feet. the top right shows a singer holding a score, and the bottom left shows steamboats passing by. 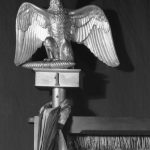 12. Bronze Eagle Finial French c. 1813-1814. This finial was on top of a silk flag from Napoleon’s First Regiment of Imperial Guard. The thieves tried to remove the whole flag, but it was in a case that was screwed to the wall, so they just grabbed the finial instead. The flag and its finial hung in Isabella Stewart Gardner’s home on Beacon Street before it was moved to the museum. 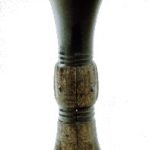 13. An Ancient Chinese Gu1200 – 1100 B.C.E this item was used as a beaker in the Shang dynasty of China. This item was one of the oldest items in the entire museum.

The case has puzzled crime solvers for years. How did the thieves know where the timed security alarm printouts were? How did they know when the alarm went off in the museum that it wouldn't alert the police? The average art heist takes 10 minutes. So, why did they take so long? Why were they confident enough to take two trips to their car?

In 2015, the FBI has stated they believe they know who committed the robbery: George Reissfelder and Leonardo DiMuzio. But both Reissfelder and DiMuzio died within a year of the heist. The FBI believe the art was transported to Connecticut and Philadelphia through organized crime connections to try to sell the items on the black market. But after those attempted transactions, there hasn't been a trace.

Evidence suggests that the Italian mob in Boston was behind the theft. Reissfelder and DiMuzio were known associates of the now deceased mobster Carmello Merlino. At the time, organized crime members seemed excited about the idea that they could trade a stolen painting in exchange for no jail time, if they were ever caught doing more unsavory business. But several of them did get caught, and no one seemed to know anything about the artwork. Several others died not too long after the heist, and seem to have taken their secrets to the grave. Even with the $10 million reward for the safe return of the items, no one has come forward with credible information.

The whole thing is a puzzling mystery and no one seems to have any fresh leads. Some people think the items are hiding in someone's attic. Others think the pieces have left the country and are hiding in a rich oligarch's house. Many believe the pieces are separated and are not all together. What do you think?

To learn more about the robbery, check out these items: