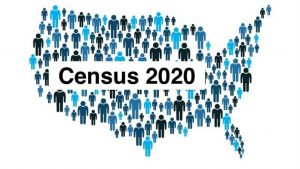 This is a guest post written by Gail Fithian, Assistant Research Services Manager.

The Census is a count of every person living in the United States regardless of age, sex, race, or citizenship. Since 1790 a national census has been conducted in the United States every ten years. It collects important statistical information about our country’s population.

The 2020 Census will be the first to urge most households to respond online, but people will also have the option of responding by phone or paper questionnaire. It takes most people less than 10 minutes to respond to the Census.

Why is responding the Census important?

Answering the Census helps your neighborhood, city, state, and the nation in many ways:

The Census decides how many Congressional Representatives each state is entitled to. It also determines how legislative districts are divided, affecting how your city or town is represented in the House of Representatives. When the Census fails in counting everyone, it is called an “undercount.” Undercounting can lead to states and towns becoming economically and politically disadvantaged due to not being fairly represented by government.

The Census determines federal funding of programs and services

Federal grants to states and municipalities are often directly tied to Census population counts. An undercount of residents means Massachusetts communities will not receive essential funding for libraries, schools, child care, highways, the MBTA, energy assistance, and other programs that impact quality of life.

For every person that is not counted in the 2020 Census, it is estimated their community will miss out on $2,400 in federal funding every year – that’s $24,000 per person over a decade. At least $3 billion in federal grants to Massachusetts each year between 2021 and 2030 are at risk to an undercount in the 2020 Census.

Historically, children have been undercounted in the census. There are estimates that as many as 2,000,000 children under age five were missed nationally in the 2010 Census, and as many as 20,000 missed in Massachusetts alone. It's critical that babies and children be counted, since schools and programs that serve children will be underfunded without accurate data.

The Census is safe for everyone to respond to, and holds all information provided in strict confidentiality.

How to Respond to the Census:

Between March 12th and March 20th, you will receive a letter at home asking you to respond to the 2020 Census online or over the phone. Some people will also receive with this letter a paper questionnaire that they can mail in with their response.

To help you answer the census, the U.S. Census Bureau provides translated web pages and guides in 59 non-English languages, including ASL, as well as help in large print and Braille

You can preview the questions online that will be asked on the Census’ website.

Through April 27, reminder letters and postcards will be sent to help you remember to respond to the Census.

If you have not responded by May, a Census worker will visit your home to obtain your response. Please Note: Census workers must present an identification badge with their photo, which has the U.S. Department of Commerce watermark, and an expiration date. A Census worker will never ask you to step outside of your door. Report any suspected fraud to 1-800-923-8282. Learn more here.

Where Do I Go for More Help and Information?

For information on services for people who are deaf or hard of hearing: Call the TTY number at 800-877-8339 to reach the Federal Relay Service.

Contact the Boston Public Library. All BPL locations have computers available to help you respond to the census online.