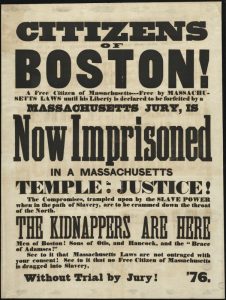 From the early 1830s, to the signing of the Emancipation Proclamation outlawing slavery in 1863, Boston was the center of the American anti-slavery movement. It was the home of many leading abolitionists of the day including:

Boston was also home to the Massachusetts Anti-Slavery Society; the Boston Female Anti-Slavery Society; and The Liberator, Garrison’s anti-slavery newspaper. Women belonging to the Boston Female Anti-Slavery Society hosted anti-slavery fairs to raise money for the cause. Lectures by prominent abolitionists were given at Faneuil Hall—a former slave auction site—as well as Old South Meeting House, the African Meeting House, and the Massachusetts State House. Moreover, Boston was an important stop on the Underground Railroad as former slaves made their way to free states and Canada.

Organizations such as the Massachusetts Anti-Slavery Society posted broadsides throughout the city. They did this to publicize the events of the day and to advocate for the freedom of slaves. These single sheet notices were printed in large, bold lettering. They often contained quotations from the Bible, the Constitution, and the founding fathers. These sources gave legitimacy to the movement and were meant to appeal to people’s feelings. Other broadsides called for Bostonians to protest the enactment of the Fugitive Slave Law against runaway slaves, since in Massachusetts all African Americans were free.

Boston Public Library holds over thirty broadsides in its Special Collections Department from the 1840s-1850s. These broadsides promoted the anti-slavery movement, advertised the events by the anti-slavery societies, and informed people about the breaking of Massachusetts laws. Additional resources include the Anti-Slavery Collection, which contains about: