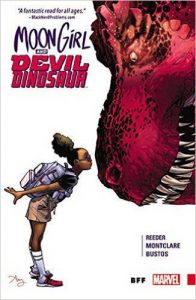 Graphic novels are more than the Superhero comics that star handsome, square-jawed,—often white—male protagonist that defend the world from villains hell-bent on world domination. They are a vibrant and malleable format that encompasses all genres and can serve to enhance an author’s stories using pictures, panels, and word bubbles. And they, like their creators and audiences, are becoming increasingly more diverse.

While diverse graphic novels exist, they are not as easy to find from mainstream publishers that enjoy great success with well-established superheroes. In her 2014 article, How Diverse are Comics and Graphic Novels? Brigid Alverson explains that, "superhero comics have traditionally been written by and for white men."  Additionally, fans of characters like Superman, Batman, and Captain America are "intensely loyal to the traditional version”, leaving little room for change while comics with original stories and new characters include more diversity.

This does not mean that big publishers are not avoiding the issue; in fact, companies created new versions of well-loved characters. Marvel Comics is experiencing success with Kamala Khan, the Pakistani-American teen who is the latest incarnation of Ms. Marvel. Also, a half black and half Latino teen named Miles Morales becomes Spider-Man after the death of Peter Parker. And, Moon Girl and Devil Dinosaur is a spin-off of an existing minor Marvel story line that follows the adventures Devil Dinosaur and his humanoid friend, Moon-Boy. After the death of Moon-Boy, Devil Dinosaur teams up with an African American child genius, Lunella Lafayette.

Superhero adventures aside, realistic graphic novels are also very popular and often the first books asked for at my library branch.  Books by authors like Raina Telgemeier and Gene Luen Yang are regularly checked out or requested. Telegmeier is the creator of the realistic middle school titles Drama and Smile—published by Graphix, an imprint of Scholastic. In January of 2017 the New York Times Best Seller list  featured three of her graphic novels. And, Yang’s book American Born Chinese, published by First Second, was the first Graphic Novel to win the American Library Associations’ Printz Award. I’ve often handed American Born Chinese and Secret Coders, written by Yang and Mike Holmes, to kids and teens, and they then come back for similar books.

Not sure where to start? Check out this list of terrific graphic novels with diverse female leads.

Hereville: How Mirka Got Her Sword

Mirka Herschberg is a spirited, smart, and brave 11-year-old girl who longs for adventure. But there isn’t much adventure in Hereville, the Orthodox Jewish community where she lives with her family. Most days she argues with her step-mother, tries to avoid to knitting practice, and fights her brother’s bullies. Things change when she meets a mysterious woman who sends her on a quest to defeat a troll and win his sword.

Ben Hatke, author of the graphic novel series Mighty Jack and Zita the Spacegirl, brings us another story of friendship. In this Eisner Award-winning story, a little girl finds and befriends a damaged robot near her trailer park. Things change when a large, menacing robot comes to collect little robot and bring him back to the Robot Factory. Can the little girl save her friend?

Fourth grade super-genius Lunella Lafayette, called Moon Girl by her classmates, is a plucky, courageous, African American girl who kids can cheer for. One day she crosses paths with the Killer-Folk, a prehistoric humanoid group, and Devil Dinosaur, the large, red T. Rex, out to avenge his dead friend. To save the world, Moon Girl must free the Devil Dinosaur and stop the killer-folk from acquiring the Omni Wave Projector.

Priyanka Das lives with her mother who emigrated from India under mysterious circumstances. Priyanka wants to learn more about India, but her mother refuses to go back and does not want Priyanka to go alone. More importantly, she won’t talk about Priyanka’s father. Things change when she finds a magical pashmina that transports her to fantasy version of India when she wears it. Can Priyanka solve the mystery of the pashmina and learn more about her mother's past?