In celebration of Women’s History month, this is the second post in a series by blogger Kim Reynolds (Curator of Manuscripts) focusing on BPL's special collections featuring notable 19th century American women. 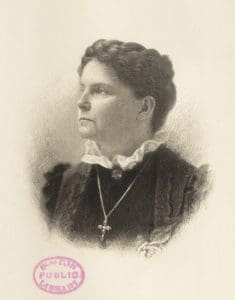 Celia Thaxter (1835-1894) was born in Portsmouth, New Hampshire. She grew up on the Isle of Shoals and Appledore Island, Maine, where her father Thomas Laighton owned Appledore House, one of the first resorts in New England. She married Levi Thaxter when she was 16 and moved to Watertown, Massachusetts in 1851. “Land-Locked,” Thaxter's first poem, was published in the Atlantic Monthly in 1861. In it, she expresses her misery at being separated from nature and the ocean.

Thaxter continued to write for The Atlantic Monthly and other influential magazines including Harper’s and Scribner’s, and she wrote several books of poems and prose.

Two of her most well-known works are her autobiographical essays Among the Isle of Shoals (1878) and An Island Garden (1894). Among the Isle of Shoals appeared in a fifty-cent guidebook edition and was sold in railway stations. In An Island Garden, Thaxter recounts the year she spent working on her legendary garden, which was painted several times by the American impressionist artist Childe Hassam. The library is fortunate to have eight of Hassam's illustrations from an Island Garden, part of nearly one hundred works by Hassam in its Prints & Drawings collection.

The Rare Books & Manuscripts Department holds 269 letters written by Thaxter between 1869 and 1893. Most of these letters address friend and fellow author Annie Fields and her husband, publisher James Thomas Fields.

In this collection of correspondence, Thaxter describes her domestic life, writing and other artistic endeavors, gardening, and experiences with Spiritualism. The collection also contains letters regarding the infamous murders at Smuttynose Island; Thaxter later wrote an essay about them entitled “A Memorable Murder.”

The complete Thaxter manuscript collection has been digitized and can be browsed and downloaded through Digital Commonwealth. A finding aid for the collection is also available.

Includes Thaxter's famous essay "A Memorable Murder," about the 1873 murders on Smuttynose Island.