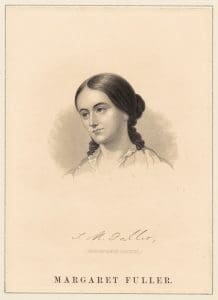 Margaret Fuller (1810-1850) was a groundbreaking editor, critic, journalist, and champion of women’s rights. Born in Cambridgeport, Massachusetts, Fuller lived a life few women of her time could imagine. After teaching at Bronson Alcott’s controversial Temple School in Boston, Fuller became the first person to edit the Dial, a progressive Transcendentalist literary magazine. She became the first female editor at the New-York Tribune and she was the first woman granted reading privileges at Harvard College. In 1845, Fuller wrote Woman in the Nineteenth Century; this book is widely considered to be the first American book on women’s rights.

While covering the Italian revolution for the Tribune in 1846, Fuller met and married Marquis Giovanni Angelo Ossoli. After several years living in Italy, the couple—now with a young son—returned to America in 1850 aboard the ship Elizabeth. Tragedy struck on their voyage; the family perished when their ship hit a sandbar and sank off the coast of Fire Island, New York. Shortly after the disaster, friend Ralph Waldo Emerson sent Henry David Thoreau to search for the family. However, Thoreau was successful only in retrieving the body of her son.

Following 40-year-old Fuller's death, Emerson and others published a 3-volume biography in 1852, Memoirs of Margaret Fuller Ossoli, which became one of the best selling biographies of the 19th century.

In 1995, Fuller was inducted into the National Women's Hall of Fame in Seneca Falls, New York, the site of the first women's rights convention in 1848.

The Rare Books & Manuscripts Department holds over 150 letters, poems, fragments, and journal extracts written by Fuller between 1837-1850. Our collection includes her correspondence with such notable figures as William Henry Channing and Ralph Waldo Emerson. These letters provide insight into Fuller’s thoughts about religion, nature, writing, women’s issues, relationships, and her travels. The Fuller collection was donated to the Boston Public Library by Thomas Wentworth Higginson and Margaret Fuller Loring in 1904.

The complete Fuller manuscript collection has been digitized and can be browsed and downloaded through Digital Commonwealth. A finding aid for the collection is also available.