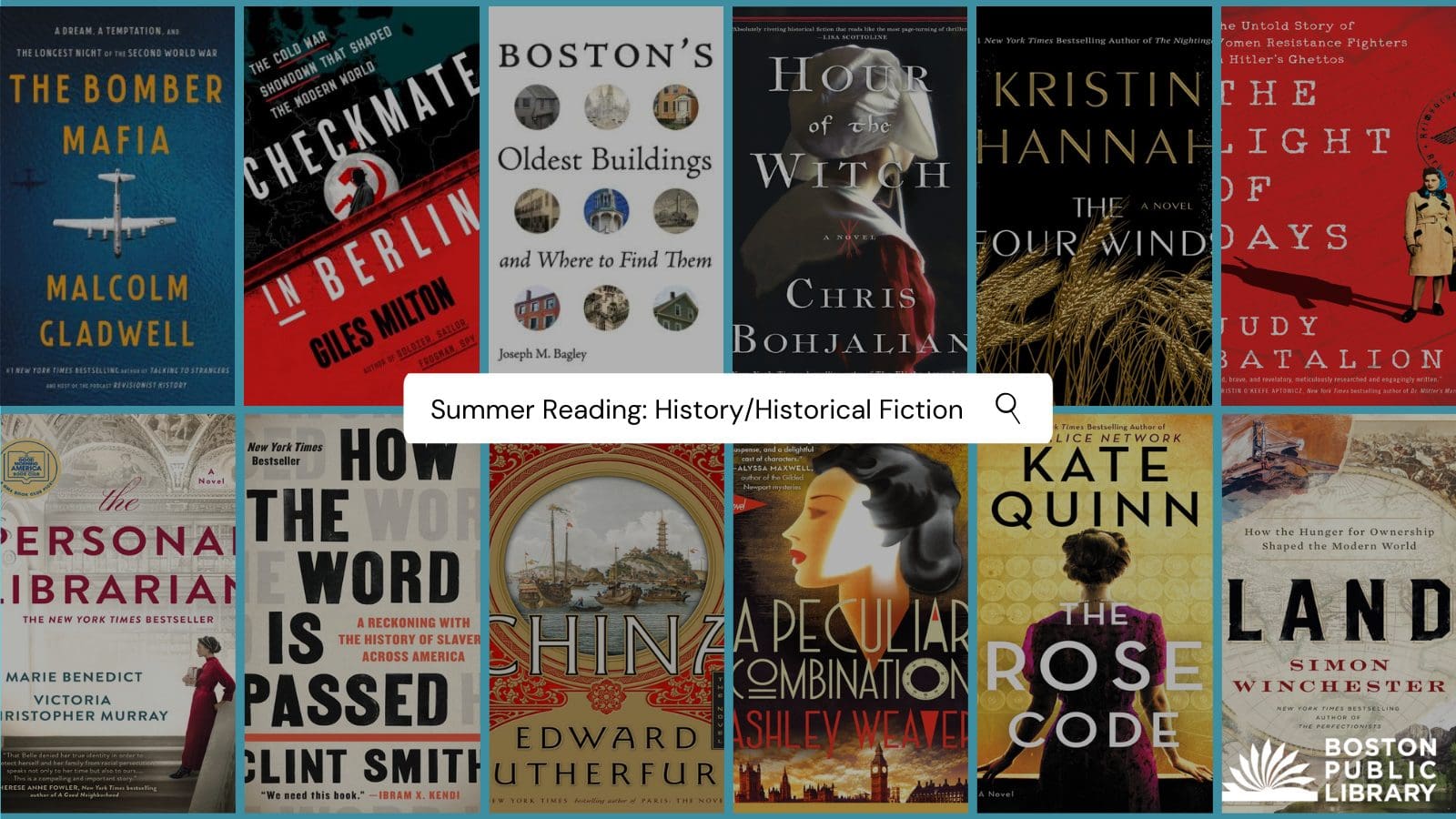 Whether you are at home or away this summer, take the opportunity to catch up on some of the latest must-read history/historical fiction books. Check out the list below for a selection of both fiction and nonfiction titles, and click on the links to obtain additional information, read reviews, and place a hold on your favorites.

The story of China's history and its relationship with the West, from the first Opium War in 1839 to the early 20th century.

Quinn (The Alice Network) brings the secret world of Bletchley Park to life with this story of three World War II female codebreakers.

Boston's Oldest Buildings and Where to Find Them

Take a trip through history with Bagley, the city archaeologist of Boston, as he explores 50 of Boston's oldest buildings.

Hour of the Witch

In 1662 Boston, a young Puritan woman plots her escape from a violent marriage while trying to avoid becoming an object of suspicion to her superstitious neighbors in the colony.

How the Word Is Passed

A staff writer for the Atlantic tours the monuments and landmarks that tell the story of how slavery has shaped the nation's history.

If you're a fan of historical fiction and also enjoy a bit of mystery and suspense, check out this first entry in a new World War II-era series featuring Electra McDonnell. Electra is a young Londoner, and an expert safecracker, who uses her unique skills to help the British war effort.

In this in-depth look at land tenure through the ages, Winchester explores the history of land use and ownership, answers the question of who owns the world's land, and explains why it matters.

The bestselling author of The Nightingale brings the Dust Bowl era to life in this epic tale of a woman who must choose between trying to save the family farm or moving west to California in search of a better life for herself and her young children.

Giles provides an immersive account of the race to take control of Berlin in the four-year period following the surrender of Germany at the end of World War II.

A fictionalized account of the life of Belle da Costa Greene. In the early 20th century she became J. P. Morgan's personal librarian, and a powerful figure in the New York City art world, while at the same time hiding her Black heritage to protect her position.

The Light of Days

The granddaughter of Polish Holocaust survivors offers a well-researched account of the contributions made by Jewish women Resistance fighters in Poland during World War II.