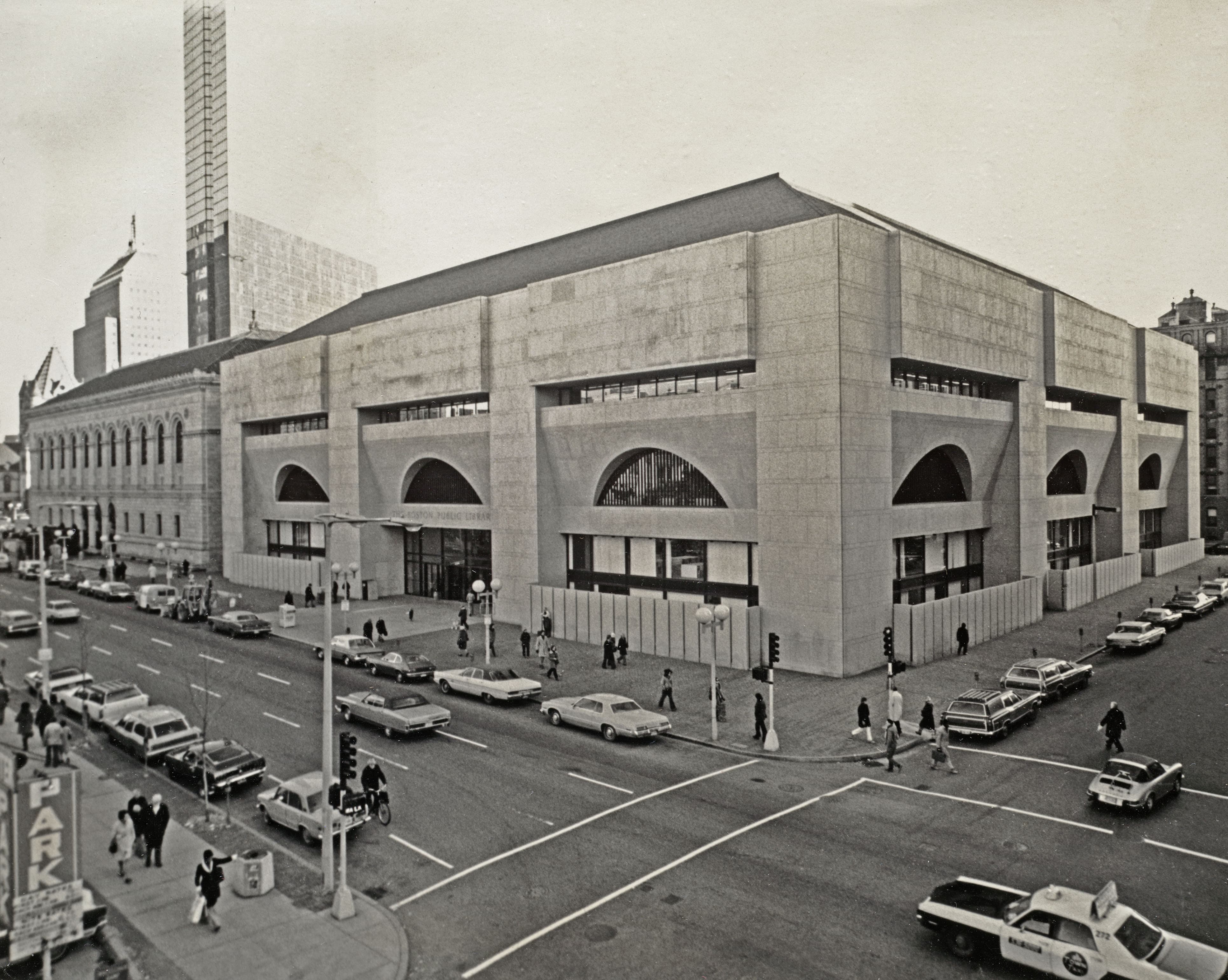 On February 1st, 1967, the City and library trustees announced that they had approved architect Philip Johnson’s design for an addition to the Central Library in Copley Square. The growth of the institution’s patronage and holdings (the collection size had nearly quadrupled since the McKim building’s opening in 1895) necessitated the addition of a second building on the Copley Square site. The Boylston Street Building, as it is now known, brought the size of the Central Library to nearly one million square feet of space.

Upon receiving the commission, Philip Johnson knew that he was up against a challenge; an admirer of architect Charles Follen McKim, he called the 1895 library “his finest building.”

Johnson sought to honor some key features of the McKim building in his addition, continuing the roofline of the adjoining building and opting to clad his structure in the same Milford granite used for the McKim exterior. His interior court, Deferrari Hall, references the central exterior courtyard in the McKim building.

In other ways, the Boylston Street Building serves as an inverse to its neighbor. While the McKim Building is supported from its wood pilings and foundation from the ground up, the Boylston Street Building’s middle and lower floors are suspended from its upper trusses. While the McKim building invites light from its windows, Johnson’s initial plans called for no such openings apart from a central skylight (library trustees eventually convinced him to include windows in the design). As the two buildings rest on different foundations, they are separated by a narrow gap to allow for different settling patterns on the infill land of Back Bay.

First opened to the public in 1972, the Boylston Street Building underwent a major restoration effort four decades later, completed in 2016. The restoration project transformed the building into a 21st-century institution with Johnson’s original goal in mind: “A library is something the people use, and they must feel well in it.” 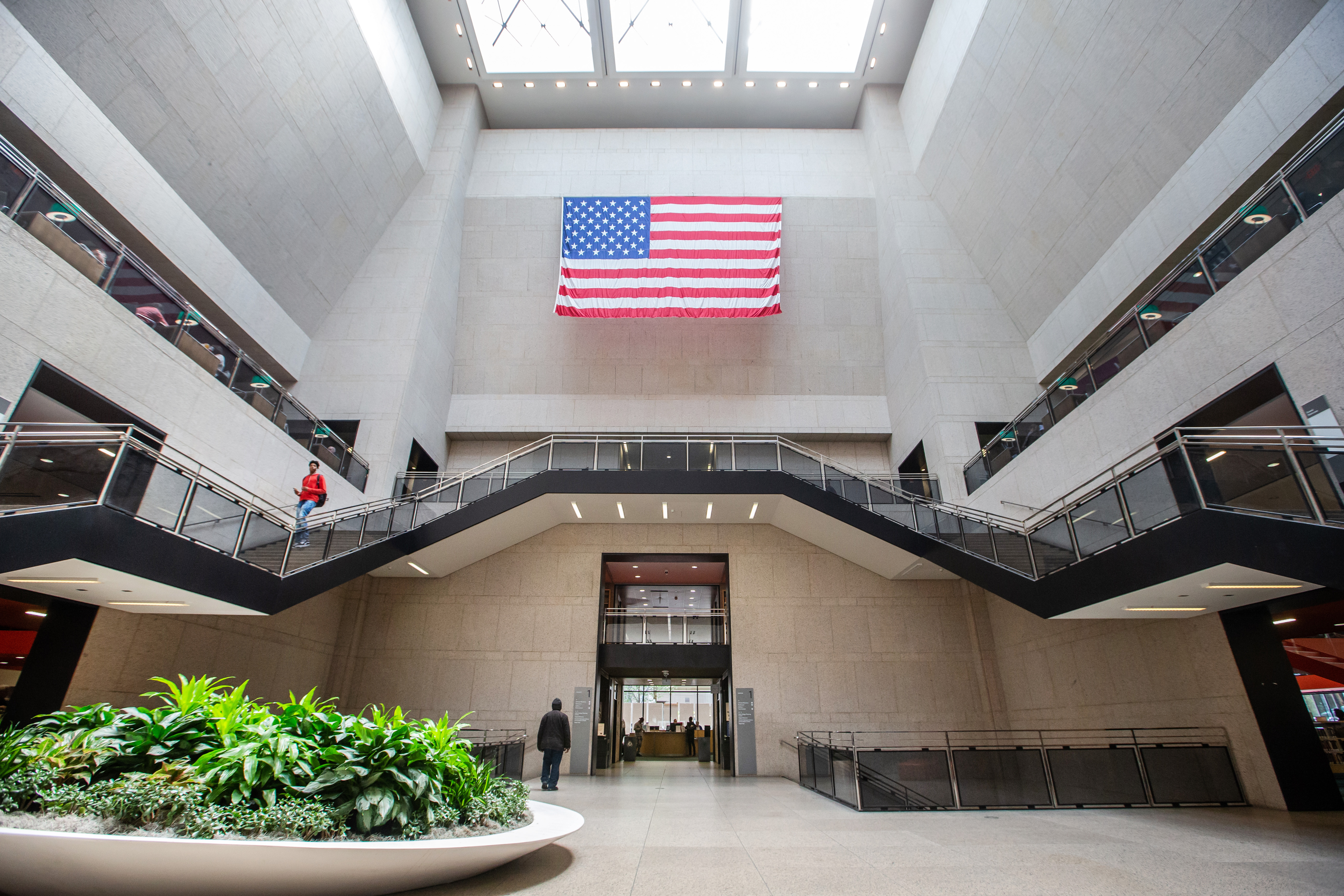 Philip Johnson intended his library building’s central court to mirror the effect of the McKim building’s exterior courtyard, giving his structure a similar sense of central space and light from the skylights above.

The Boylston Street Building’s central court is known as Deferrari Hall, named after library benefactor John Deferrari (1863-1950). Born to Italian Immigrants living in North End tenement housing, John Deferrari quit school and began his business career at age 13, assisting his father by selling fruit in downtown Boston. He eventually opened a fruit store adjacent to Boston Public Library’s former location near Boston Common, and became a frequent patron. The young entrepreneur took advantage of BPL’s business resources and began investing the proceeds from his fruit store in real estate. Over time, the self-made businessman leveraged his education from the library into a fortune, and, in appreciation, donated over $1 million to BPL in 1947.

A key architectural feature of the skylit Deferrari Hall is its cantilevered staircase, which ascends from two ends of the ground level and provides access points to the mezzanine level (supported by an orthotropic bridge design) and second floor.

In 2015, William Rawn Associates, Architects, Inc. completed the first of a two-phase Boylston Street Building improvement project, a capital city initiative started under the leadership of Mayor Thomas Menino and finished under the leadership of Mayor Martin J. Walsh. This first phase addressed the second floor, including the design of a new nonfiction section, a larger Children’s Library, and Teen Central.

2016 saw the completion of the project’s second phase, including overhauls of the Boylston Street Building lower level, first floor, mezzanine, and exterior. A major component of this work involved removing the dividing walls along the Boylston Street side of the building to create an open hall, as well as a clear visual pathway and connector to the adjoining McKim building. The granite plinths that once obstructed the building’s lower windows were also removed, allowing for an influx of light into the building’s first level.