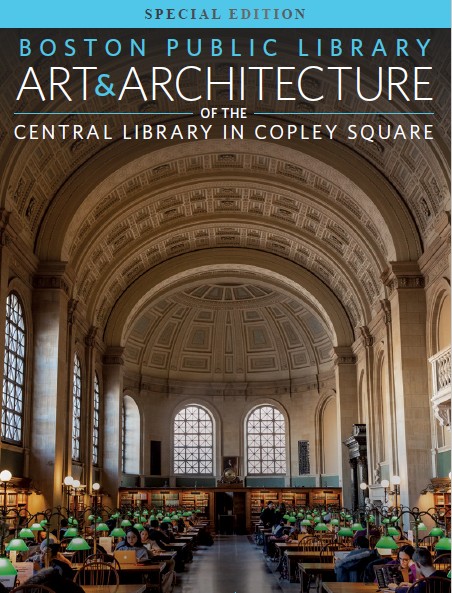 Explore the built heritage of the Central Library in Copley Square with our virtual Art & Architecture booklet, funded by Bank of America.

Take Flight: A Virtual Tour of the BPL's McKim Building

Virtual Tour of the BPL

This tour includes icons to click on that provide additional information, such as photos from other events, and information about the space. 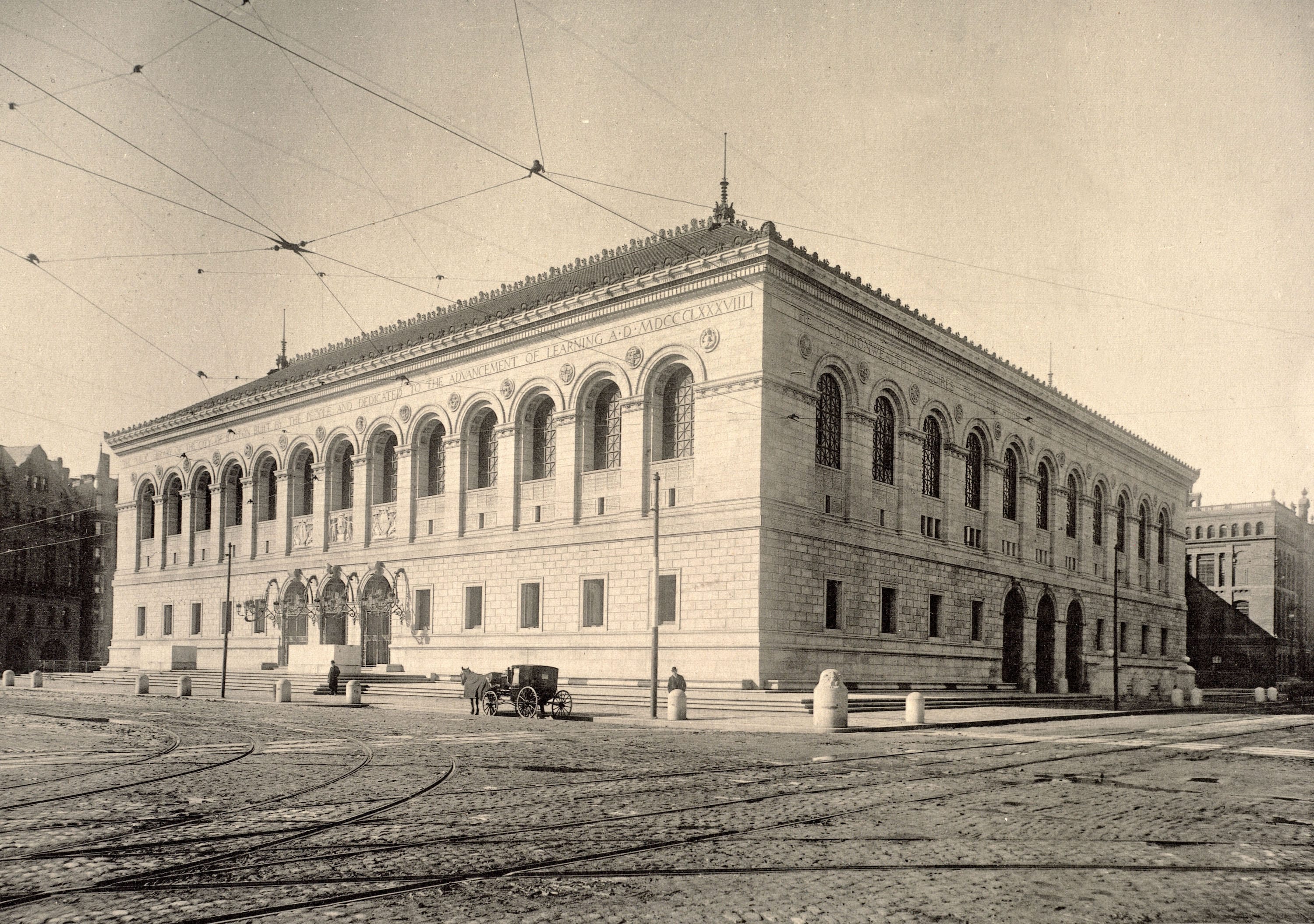 Constructed between 1888 and 1895, the McKim Building at the Central Library in Copley Square is the masterpiece of its architect and namesake, Charles Follen McKim of the McKim, Mead & White firm. McKim, along with BPL Trustees, developed partnerships with some of the greatest craftspeople, painters, and sculptors of the 19th century in order to adorn a building that would inspire and elevate its patrons. View photos from the McKim Building’s construction.

The McKim Building underwent a major restoration in the 1990s and early 2000s led by Shepley Bulfinch. The multi-phase project restored nearly 85% of the building and included a planning phase for areas of the building’s third floor that have not yet been addressed. Learn more about the project phases. 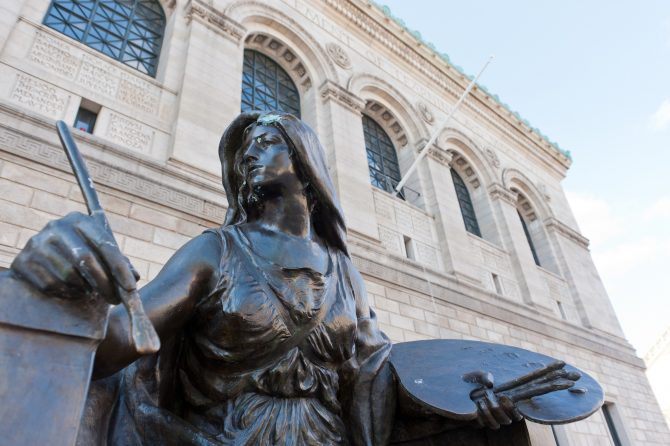 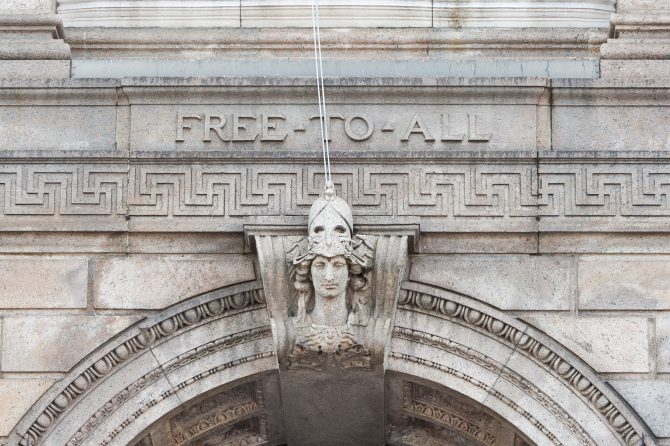 In designing the building’s façade, Charles Follen McKim referenced the proportions of another notable library, the Bibliothèque Sainte-Geneviève (1850) in Paris.

McKim tailored his exterior design to Boston Public Library by including elements that pay homage to the city and the institution. An oxidized copper cornice with a pattern of alternating seashells and dolphins adorns the roofline, referencing the city’s maritime history. Sculptor Domingo Mora created 33 medallions between the window arches, representing the emblems of booksellers and printers. Augustus Saint-Gaudens’ three sculptural seals, representing the Commonwealth of Massachusetts, the library, and the City of Boston, adorn the center of the Dartmouth Street façade. Below these, Saint-Gaudens and Mora carved the head of Minerva, goddess of wisdom, above the library’s key motto: FREE TO ALL.

Two allegorical statues by Bela Pratt were installed in 1912 and frame the entrance to the library, representing Science (holding a globe) and Art (holding a palette and brush). 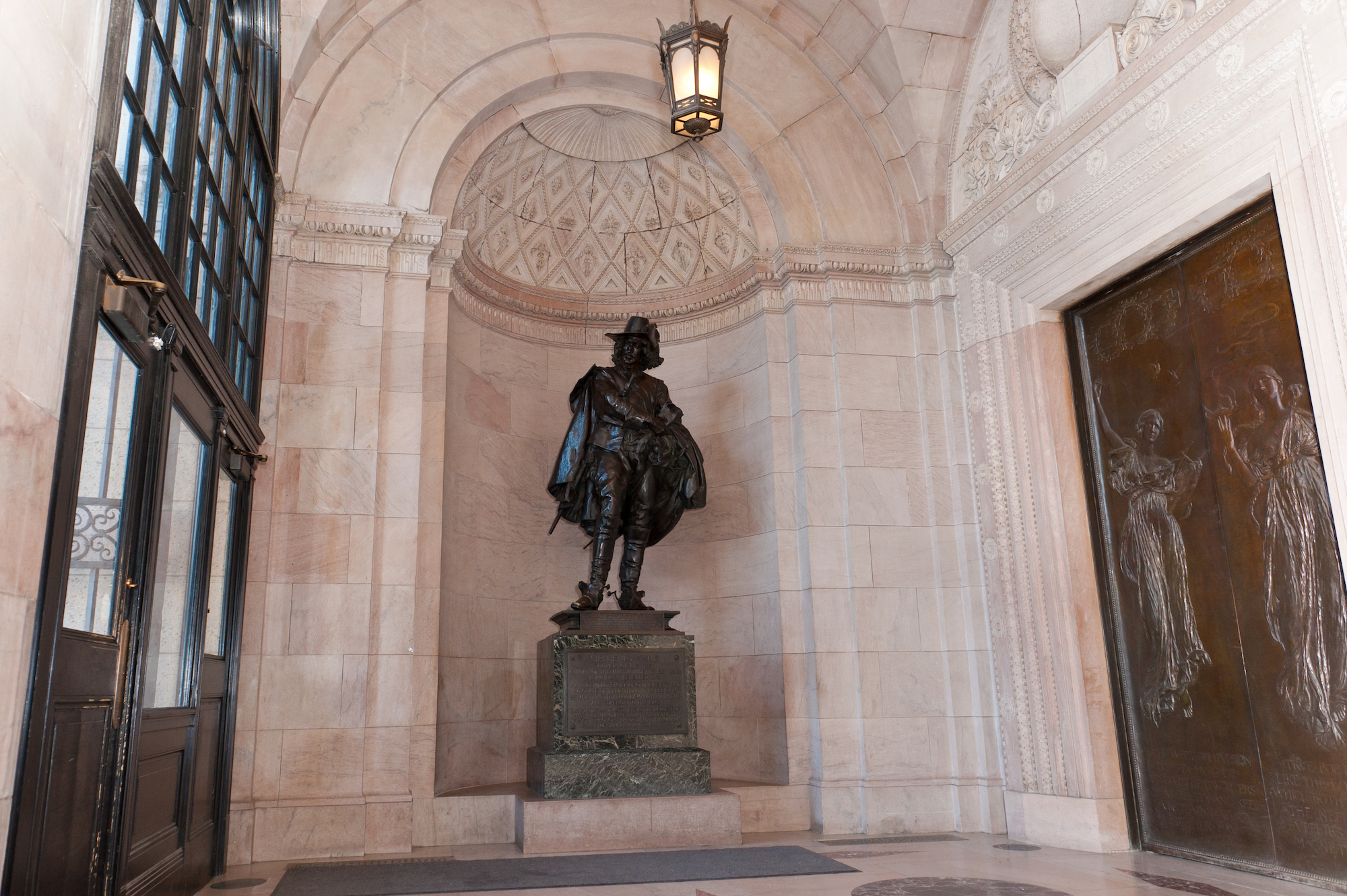 The Vestibule is the first space that patrons encounter upon entering the McKim building through the trio of doorways on Copley Square. The pink Knoxville marble walls add warmth to this entry area. Three pairs of bronze doors, sculpted in bas-relief by Daniel Chester French, bear the allegorical figures of Music, Poetry, Knowledge, Wisdom, Truth, and Romance, opening into the building’s lobby.

At the south end of the Vestibule stands Frederick MacMonnies’ sculpture of Sir Henry Vane, the sixth Governor of Massachusetts Bay Colony. 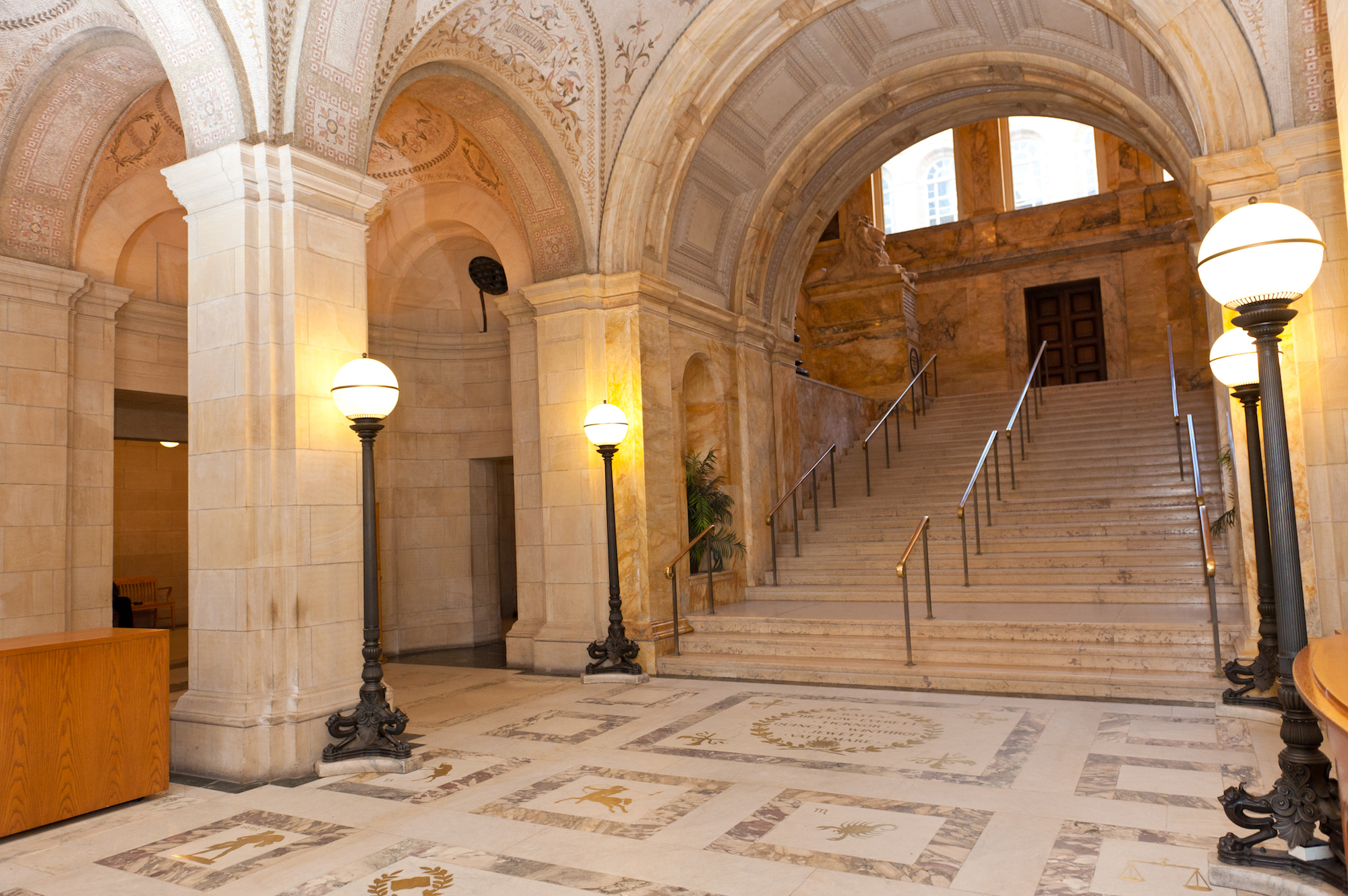 The McKim Lobby, from its Georgia marble floor inlaid with brass designs to its three aisles of vaulted ceilings, continues a grand procession into the heart of the building. The ceilings, clad in mosaic tile by Italian immigrant craftsmen living in Boston’s North End, bear Roman motifs and the names of thirty famous Massachusetts statesmen.

The mosaic ceiling tiles clad vault work by Rafael Guastavino, a Spanish builder who specialized in Mediterranean-style ceramic tile-vaulted ceilings that were lightweight, fireproof, self-supporting, and strong. Guastavino’s collaboration with Charles Follen McKim throughout a number of ceilings in the Central Library represented his first major American commission, the starting point for a company that would go on to construct vaults in over 600 buildings throughout the country.

Explore the exhibition initiative, coordinated by MIT’s Architecture Department and hosted by Boston Public Library, that celebrated the work of Guastavino. 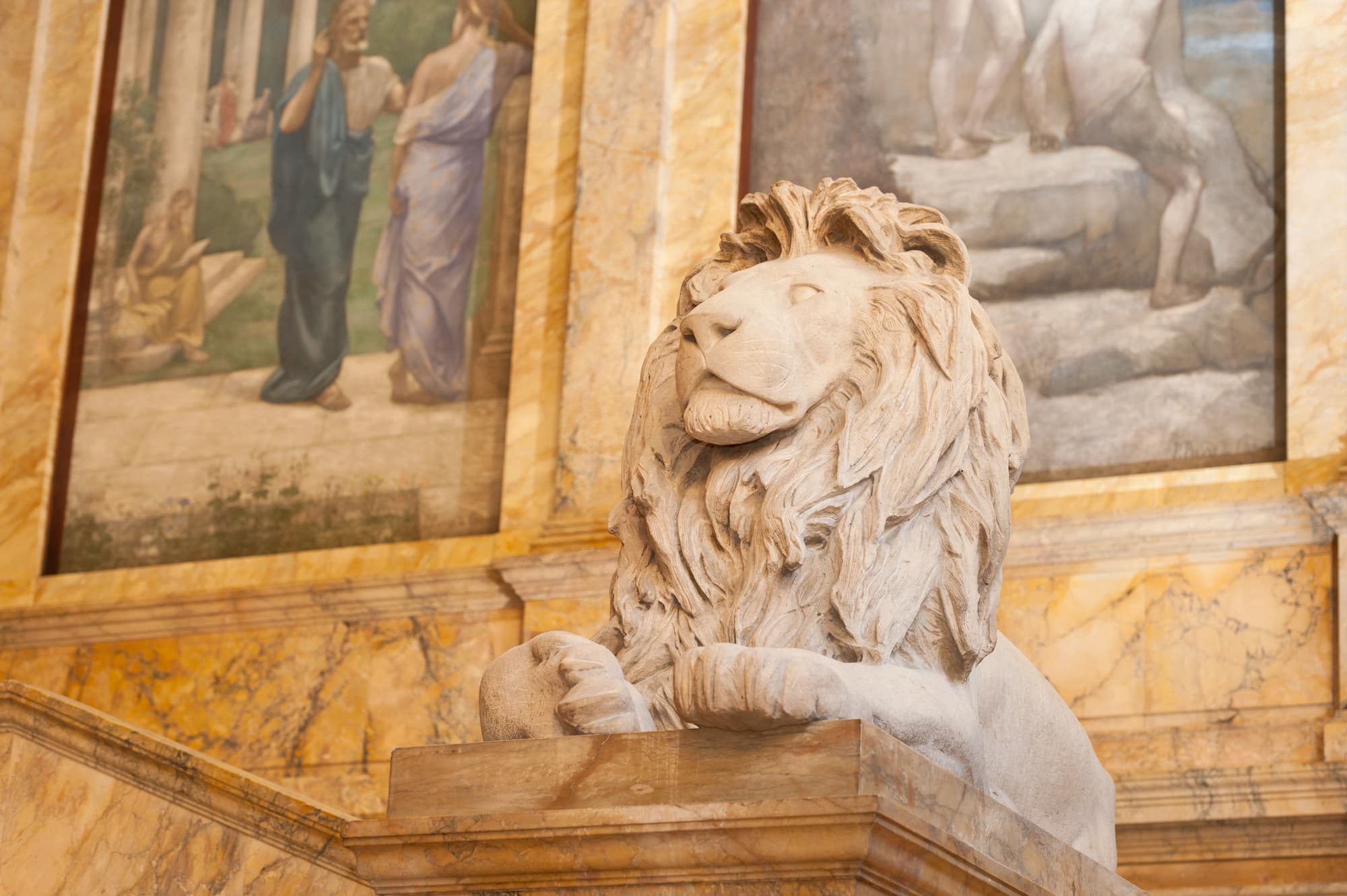 The staircase leading from the Lobby to the building’s second floor invites patrons to ascend its ivory gray Echaillon steps, which are embedded with discoverable fossils. The staircase hall is formed of yellow Siena marble; McKim reviewed roughly ten times the amount of marble needed to construct the stairs in order to select pieces with ideal patterns of variegation.

One of the most striking features of the main staircase is the pair of lions that memorialize two Massachusetts volunteer infantries in the Civil War: the Second and the Twentieth. Surviving members of the regiments funded the sculptures by Louis Saint-Gaudens, who, under time pressure, delivered the marble figures before he could polish them. Despite McKim and library trustees’ desire to finish the memorials on arrival, the lions remain unpolished at the request of the regiment survivors, who thought that the effect of the raw carved marble was ideal. Since the building’s opening in 1895, patrons have rubbed the lions’ tails for good luck, revealing their yellow Siena marble tones. 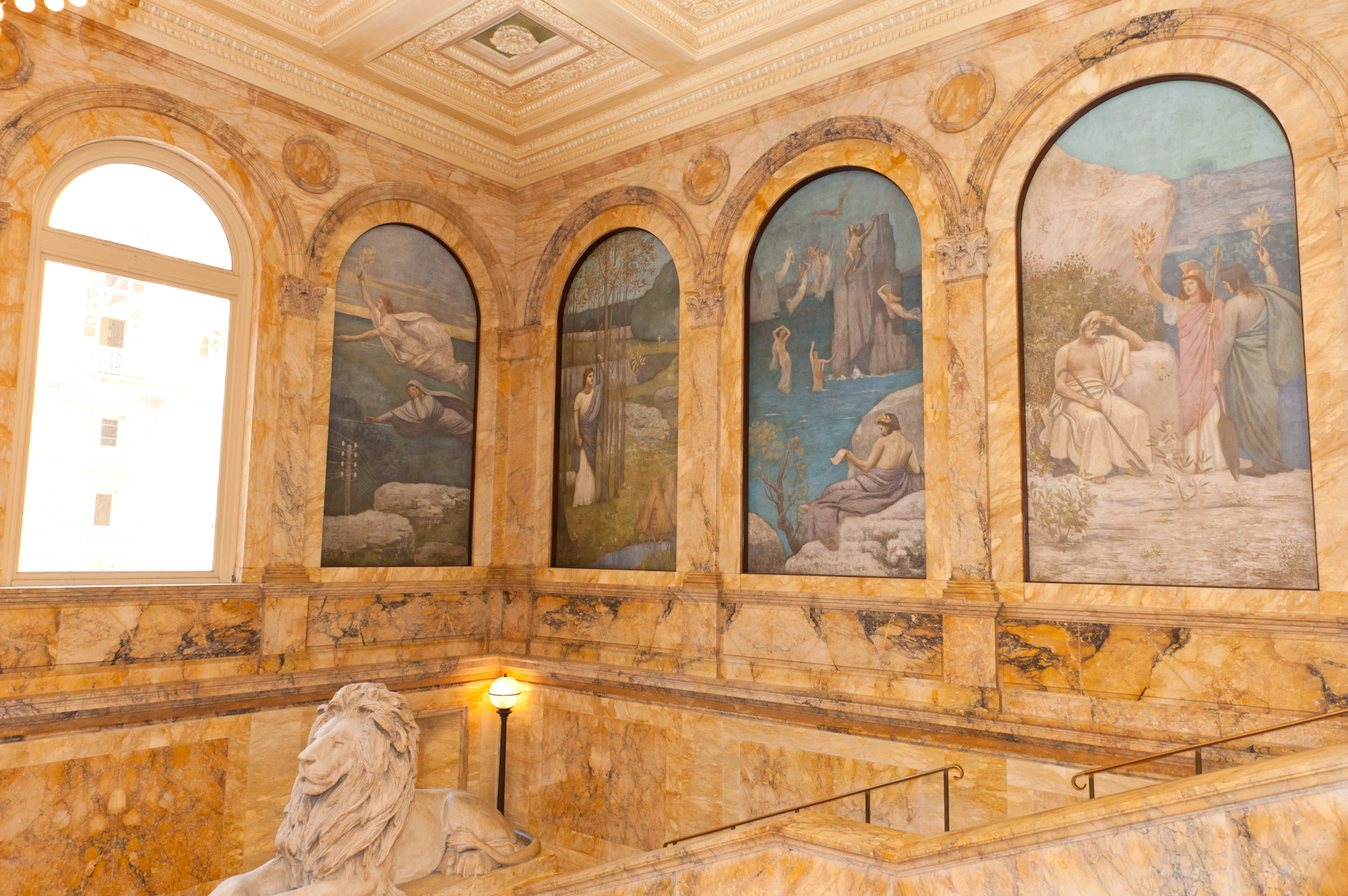 French painter Pierre Puvis de Chavannes was considered one of the greatest muralists of the 19th century. His commission at Boston Public Library represents his only mural work outside of France. Puvis, who never saw the work installed, painted his library panels on Belgian linen in Paris and shipped them to Boston for installation in 1895-96 using the marouflage technique, binding the canvases to their plaster niches with a paste of lead white and linseed oil. With their harmonious palette, which the artist chose from referencing a sample of the staircase’s Siena marble, the paintings integrate seamlessly into their architectural surround.

Encircling the main staircase are eight panels representing disciplines that one could pursue in the library. From left to right, facing the central windows onto the central courtyard, are Philosophy, Astronomy, History, Chemistry, Physics, Pastoral Poetry, Dramatic Poetry, and Epic Poetry. A long panel flanking the entrance to Bates Hall bears The Muses of Inspiration Welcoming the Spirit of Light. View images of the Puvis murals.

In 2016, a major conservation effort took place to save the Philosophy panel following the weakening of its plaster support. Learn more about the groundbreaking project. 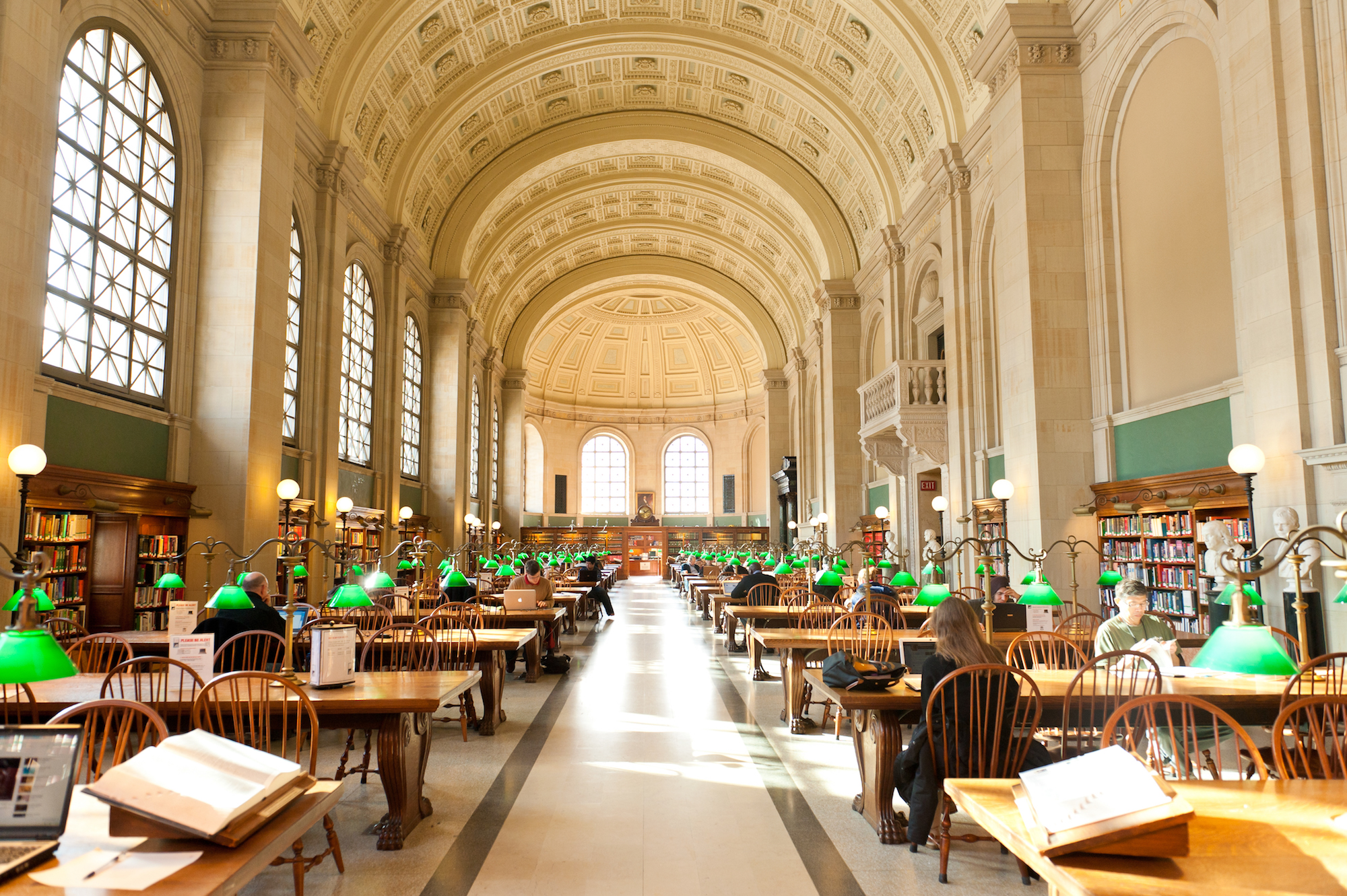 The Central Library’s main reading room was named after the institution’s first major benefactor, Joshua Bates. Bates, who had grown up without a public library, recognized the institution’s importance and offered to fund the purchase of books for the library upon its founding in 1852. His conditions for the donation were that the new library be “an ornament to the City,” provide room for at least 150 patrons, and be “free to all.”

Bates Hall spans the Dartmouth Street length of the McKim building and supports an impressive, 50-foot-high barrel vault ceiling. The hall’s English oak bookcases and tables have been in use almost every day since the building’s opening in 1895. 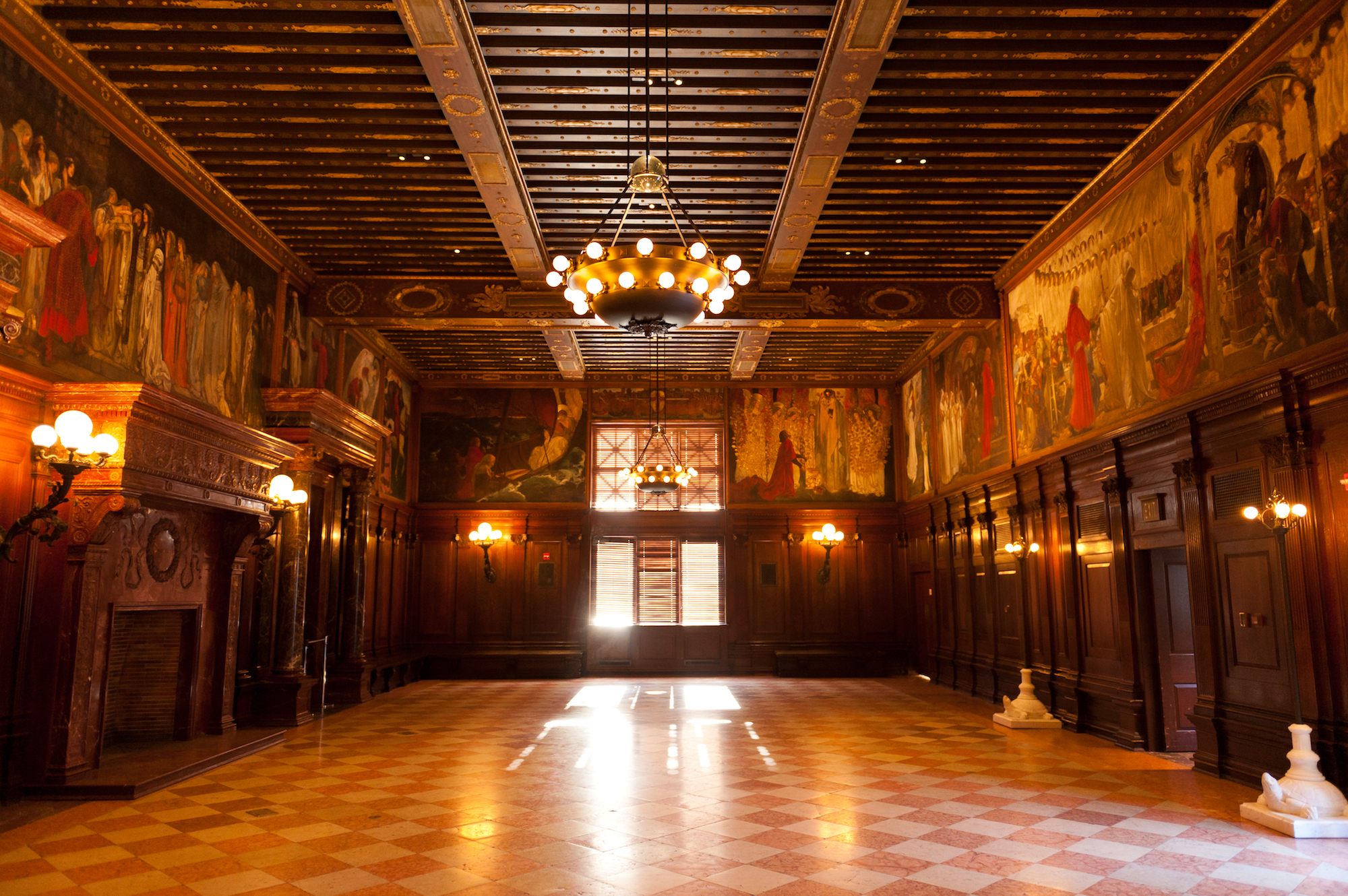 Now named for the artist who adorned its walls with a mural cycle, the Abbey Room formerly served as the Book Delivery Room, where library patrons would wait for books requested at the desk in Bates Hall.

An established illustrator for Harper’s Magazine, Edwin Austin Abbey had comparatively little experience working in oils and had never painted a mural before accepting the library commission in 1893. In 15 panels encircling the Book Delivery Room, he depicted Sir Galahad’s Quest of the Holy Grail, combining multiple versions of the Grail legend.

Many 19th- and early 20th- century library patrons would have been familiar with the story of the Grail. Sir Galahad’s red cloak – representing purity – makes the protagonist recognizable throughout the engaging panels as he pursues his quest.

American-born Abbey resided and painted his mural panels in England. Once complete, he accompanied the canvases to Boston during two installations, affixing them to the walls using the marouflage technique.

View images of the Abbey Murals and read a description for each panel. 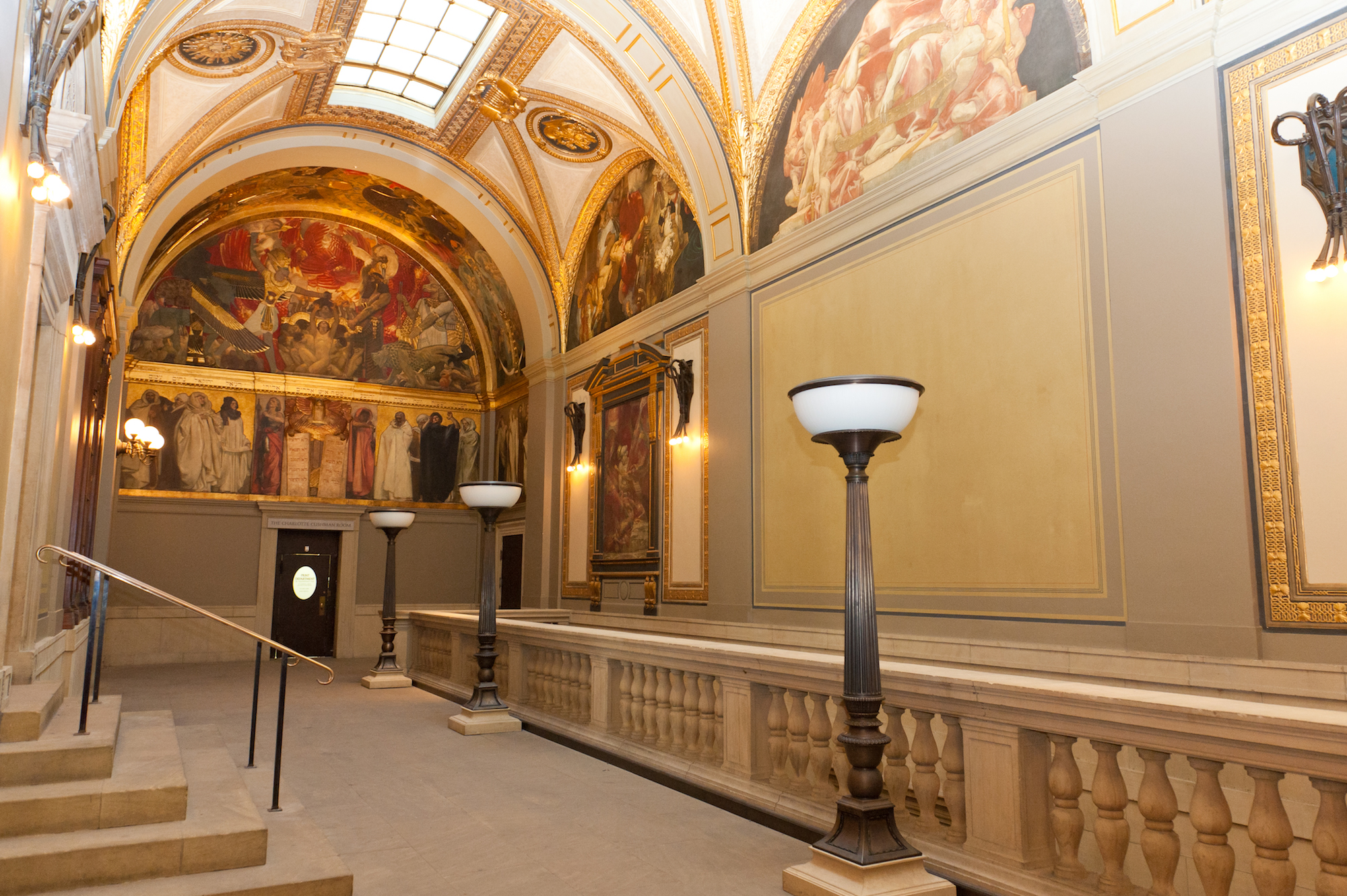 Artist John Singer Sargent spent 29 years of his career adorning an impressive hall on the third floor of the McKim Building between 1890 and 1919. While Sargent was born to an American family in Italy and lived most of his life in Europe, he held close ties to Boston. Known primarily for his portraits, he considered his commission at the new Central Library an opportunity to create a masterwork.

His chosen theme, Triumph of Religion, incorporates a broad range of moments and iconography from early Egyptian and Assyrian belief systems, Judaism, and Christianity, as he had come to know them through study.

Sargent painted his mural panels in England, traveling with them to Boston for four installation phases. To illuminate his painted figures in the skylit hall, the artist incorporated gilded molding and over 600 pieces of raised relief in materials such as plaster, metal, wood, and glass.

Following the 1919 installation of images of Synagogue and Church on the hall’s east wall, a controversy erupted around the depiction of Synagogue, with legions calling the panel defamatory to Judaism and demanding its removal. Sargent insisted that he had no intention for the painting to carry this message, but nevertheless found his project enveloped by a public storm. He never completed the final, central panel along the east wall, intended to illustrate the Sermon on the Mount, before he passed away in 1925; the panel remains blank to this day.

View images of the Sargent murals.

In 2003-2004, the Straus Center for Conservation and Technical Studies at Harvard led a major initiative to restore the Sargent Gallery. 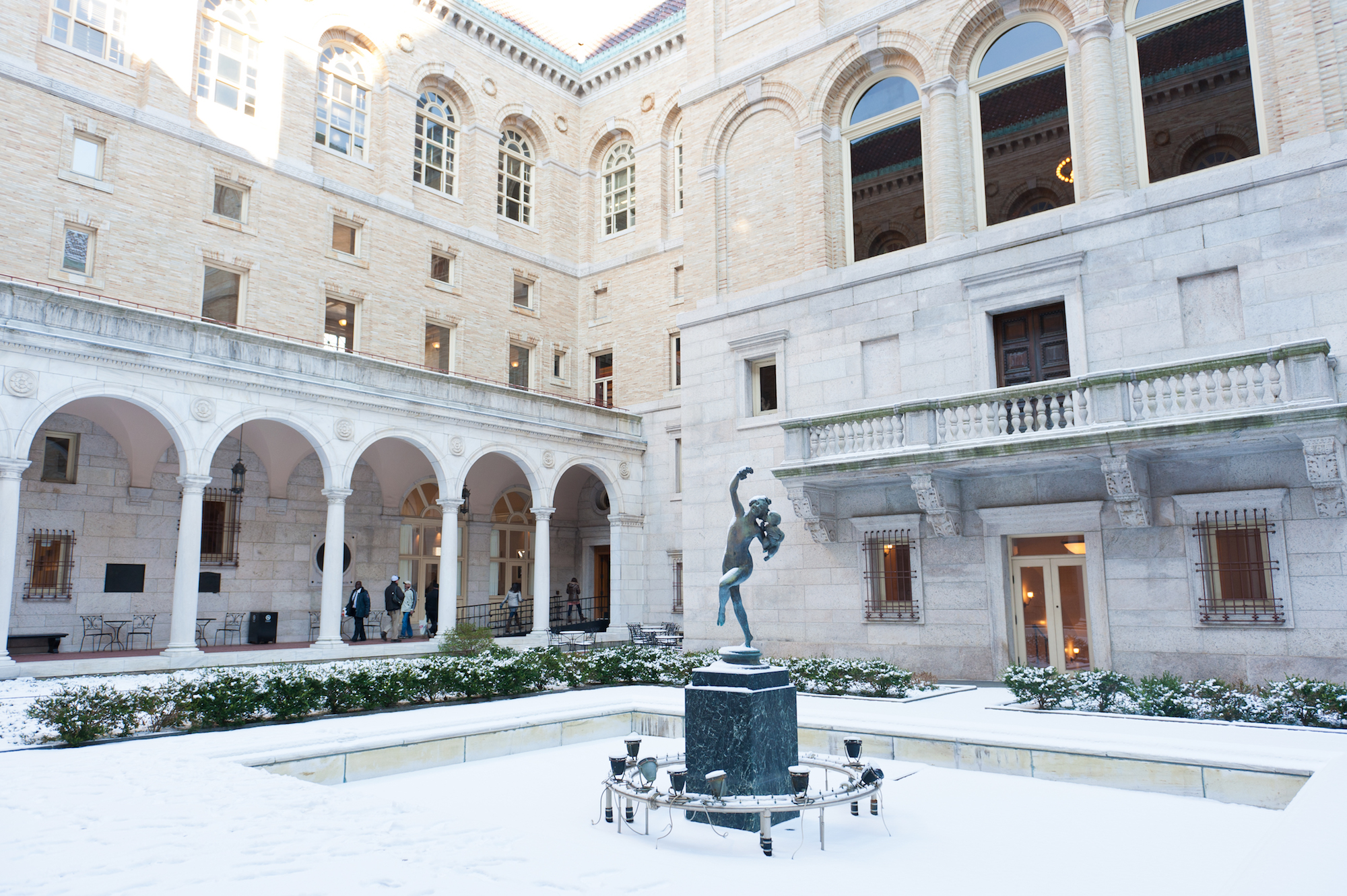 Charles Follen McKim designed the Central Library’s courtyard after that of the Palazzo della Cancelleria in Rome. Its covered arcade surrounds an open plaza skirted by white marble and low greenery, at the center of which lies a pool and fountain.

The keynote of the courtyard is arguably the bronze statue of Bacchante and Infant Faun by Frederick MacMonnies, gifted to the library by McKim himself. When she was unveiled in 1896, Bacchante caused a frenzy among Bostonians, who were outraged by her apparent embrace of drinking (she clasps a symbolic bunch of grapes in her outstretched hand), debauchery (as a nude, dancing figure), and worst of all, her subjecting the infant held in her left arm to this behavior. The community clamored for her removal, and in 1897, McKim transferred his gift to the Metropolitan Museum of Art in New York.

Nearly a century later, the city commissioned a cast of the Boston Museum of Fine Art’s copy of the original Bacchante, returning her to her original location as part of the McKim building restoration project in the 1990s.