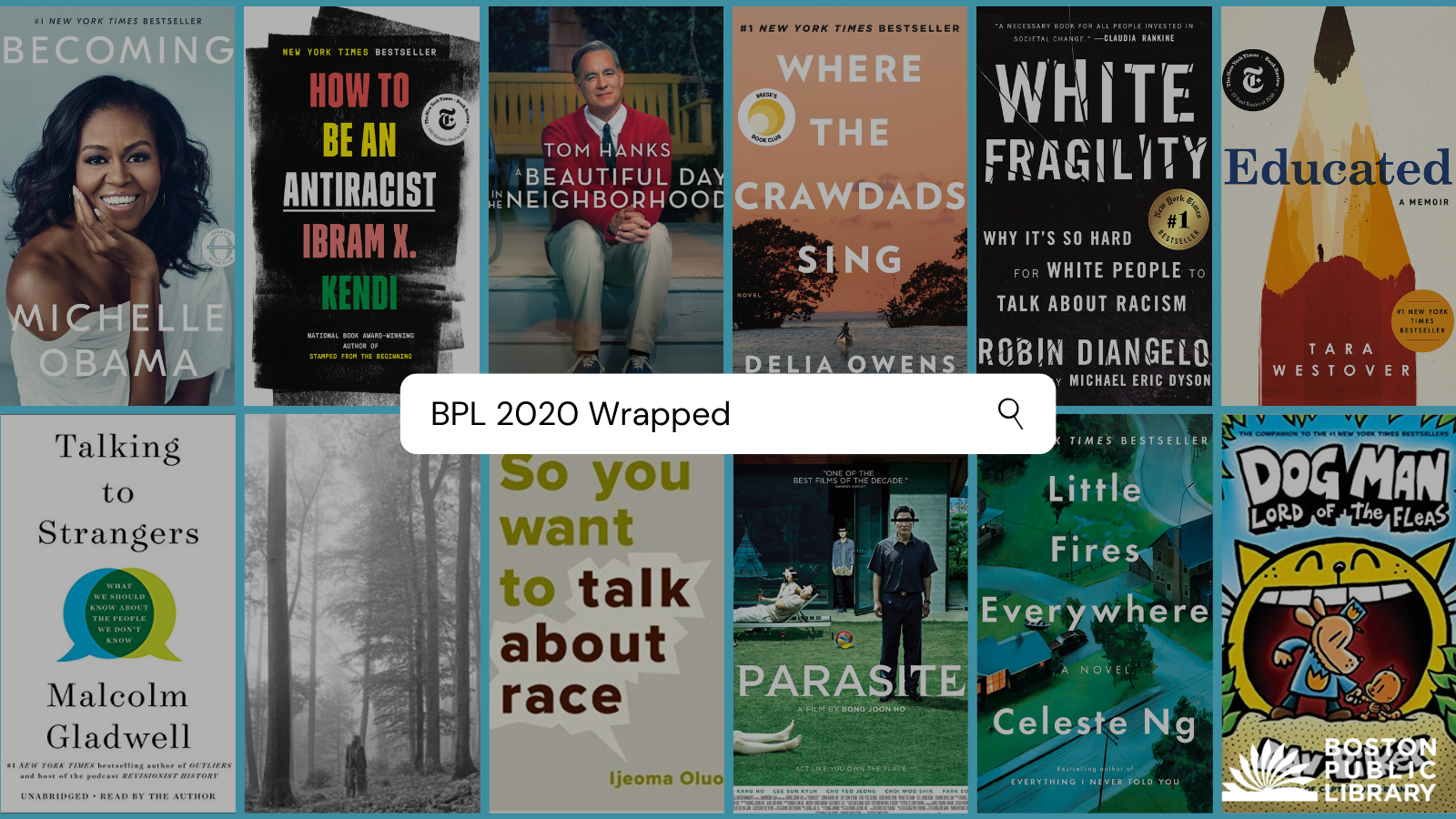 BOSTON – December 31, 2020 – As 2020 draws to a close, the Boston Public Library is reflecting on a year unlike any other. From launching BPL To Go during a global pandemic, to an outpouring of demand for BLM and anti-racist literature, the BPL has worked to meet the evolving needs of the Boston community.

“As it was for everyone, 2020 was a truly unprecedented year at the BPL. As the City of Boston, and the world, went virtual, we were proud to continue to serve our community both through enhanced digital offerings, and with our newly launched BPL To Go program, for in-person service,” said BPL President David Leonard. “Through the BPL To Go program, we were able to circulate more than 203,000 physical items and complete about 200,000 in-person patron transactions, while continuing to offer an even greater range of online events and services. As we look ahead to 2021 the BPL remains committed to equity, accessibility, and staying free to all.”

The BPL and Readers Services Department has published its annual list of the top borrowed titles of the year and the staff’s favorite books of the year. The top 10 checked out books of 2020 were:

Unsurprisingly, the BPL saw a major boost in patrons using its digital platforms this year. There was a 31.4 percent year-over-year usage increase in the OverDrive platform, BPL’s main digital lending platform, with patrons checking out more than 2.9 million eBooks and audiobooks. 2020 also saw 50 percent growth in usage of Hoopla, which also offers audiobooks and eBooks, as well as streaming movies and music; and 300 percent usage growth in Kanopy, which offers movie streaming.

“In 2020, we saw unprecedented growth for digital collections, reaching more than 3 million digital borrows, which represents 100 percent growth over 2019. That’s approximately one million new digital borrows,” said Collection Development Manager Melissa Andrews. “We added more than 70,000 eBooks and audiobooks to our collections to meet demand as school, work, and recreational reading moved online. In addition to serving this increased demand, we offered nearly 1,000 personalized reading recommendations to adults and children looking for help finding their perfect next read in an unprecedented year.”

Anti-Racism Collection
In June, at the height of the nation’s Black Lives Matter marches, the BPL saw a 500 percent increase in checkouts and holds on the most popular anti-racism and BLM titles. At one point, hold queues reached over 1,200 patrons for both White Fragility: Why It's So Hard for White People to Talk About Racism by Robin DiAngelo and How to Be an Antiracist by Ibram X. Kendi, while wait time on many titles related to BLM and anti-racism grew to more than 12 weeks. To meet this rising demand, the BPL spent more than $75,000 to expand this collection by purchasing new and additional copies of in demand titles, reducing holds by 89 percent. A portion of that budget went to making 20 of the most popular BLM and anti-racism books instantly available to all patrons, completely eliminating wait times for those titles. The Antiracist Reading List collection currently has 139 featured titles, which have been circulated more than 45,000 times since June 1. The top checked out tiles from this collection were:

Top Five Quarantine Reads, Listens and Views
While this year started like any other, day-to-day life changed in March as our community shifted to quarantine. While many Bostonians were stuck inside, these are the top five items they read, watched, and listened to during the pandemic (March – December):

Anyone who lives, works, or goes to school in Massachusetts may have a library card. Register for an eCard at bpl.org/ecard. Check out physical items using the BPL To Go program at any open branch using bpl.org, the BPL To Go app or by calling 617.536.5400.