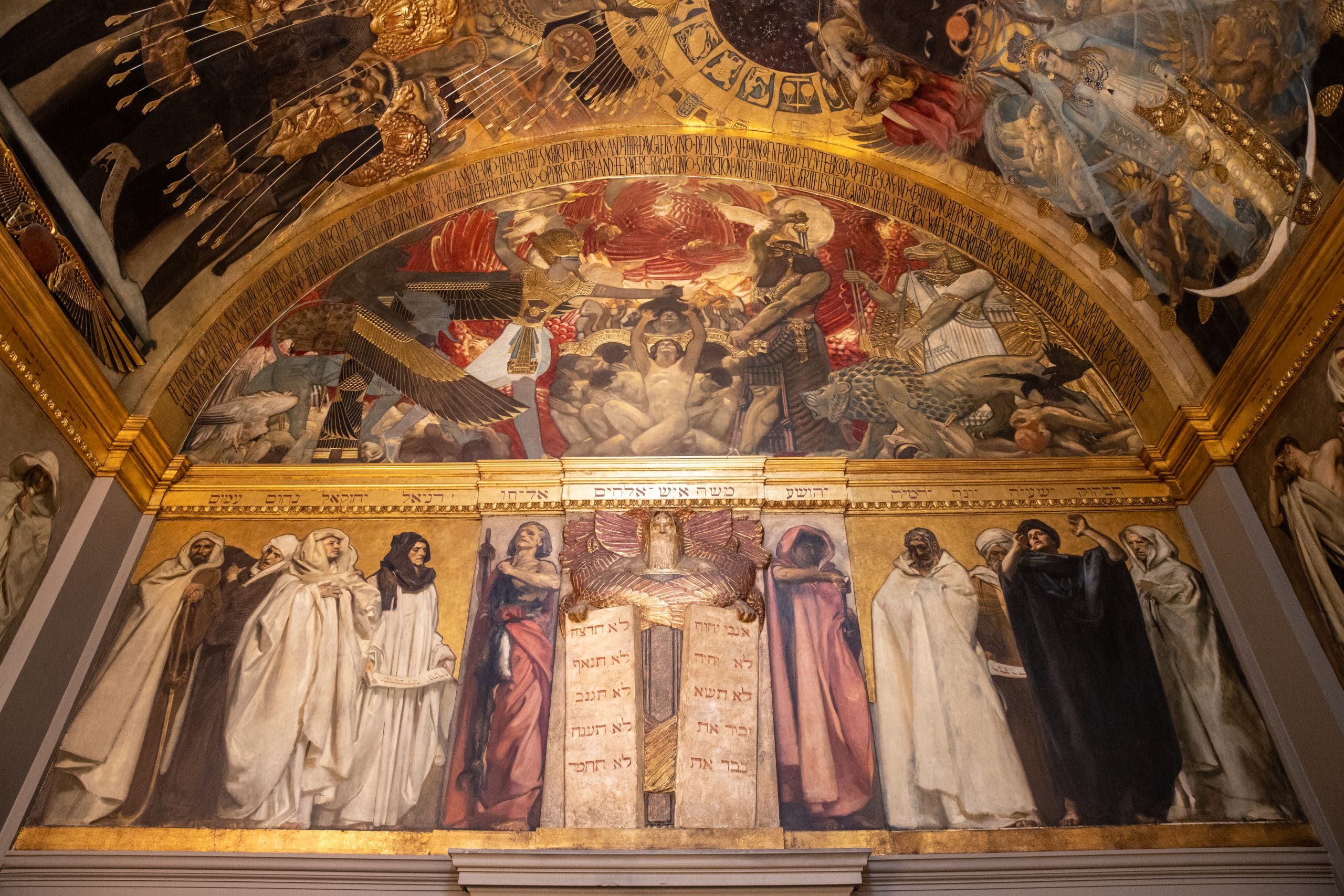 May 4, 2022 – BOSTON, MA – The Boston Public Library today announced the Sargent Lecture Series: New Interpretations of Sargent’s Murals at BPL, opens a new window. The library is gathering a group of conservators, historians, curators, and authors to revisit this significant project in Sargent’s life and to offer fresh perspectives on Sargent’s groundbreaking mural cycle, installed in phases between 1895 and 1919. The talks will make connections across local and international collections and resources to promote further study and discussion of Sargent’s library works. All lectures will be held virtually via Zoom, and a projection onto the space reserved for Sargent’s final—and unrealized—panel in Sargent Hall will be on view from May 9  - June 30.
“Boston Public Library is thrilled to bring together such an experienced and engaging group of speakers and panelists to illuminate John Singer Sargent’s murals on view in the 1895 McKim Building,” said Meg Weeks, BPL Curator of Interpretation. “This work spanned the better part of three decades of this beloved artist’s life, and we hope that more patrons—near and far—will be able to experience this fascinating progression of paintings and the resources that support our interpretation of their imagery and history. Because this series is online, it has the potential to reach a broad audience; we want the public to know that these remarkable works are freely available for the enjoyment of all visitors – both in-person and virtually.”
John Singer Sargent’s mural cycle at the Central Library in Copley Square, entitled Triumph of Religion, spanned twenty-nine years of the prolific artist’s career between 1890 and 1919. The murals incorporate a range of moments and iconography from early Egyptian and Assyrian belief systems, Judaism, and Christianity. Sargent’s choice of themes was not without controversy; in fact, this year marks the centenary of the (later struck down) 1922 Massachusetts legislative bills to remove a contentious portion of the mural titled Synagogue. The BPL hopes to bring this history and the powerful public response to the murals to light, and to explore what it means to interpret public art—especially that which is controversial—in the 21st century.
Following the BPL Lecture Series that will provide new interpretations of the murals, an online panel will convene to discuss the Synagogue controversy and how open discourse around interpreting potentially offensive public art can aid in our interpretation and stewardship of these works. Registration details will be available shortly.
The lecture series includes the following events, opens a new window:
New Interpretations of Sargent’s Masterwork at Boston Public Library, opens a new window , opens a new window
Monday, May 9th, 6:00pm EST
Speaker: BPL’s Curator of Interpretation, Meghan Weeks
Reflections on the Restoration of John Sargent's Murals at the Boston Public Library, opens a new window , opens a new window
Tuesday, May 10th, 6:00pm EST
Speakers: Conservators in the 2003-2004 mural campaign, Gianfranco Pocobene and Kate Smith
1916: Sargent in Command, and In Demand, opens a new window , opens a new window
Monday, May 16th, 6:00pm EST
Speaker: Art Historian and Author, Mollie Crawford-Volk
Sourcing the Madonna of Sorrows: Painting, Sculpture and Sargent’s Spanish Photographs, opens a new window
Wednesday, May 18th, 11:00am EST
Speakers: History of Art and English Lecturer, Chloe Sharpe, introduced by Art Historian, Co-Author of Sargent’s catalogue raisonné, opens a new window, and great-nephew of the artist, Richard Ormond
Sargent Keeping Faith: Church and Synagogue 1919, opens a new window
Monday, May 23rd, 11:00am EST
Speakers: Authors of John Singer Sargent and His Muse: Painting Love and Loss, opens a new window, Karen Corsano and Daniel Williman
A Panel Discussion of the mural’s controversial history will follow in late May; details forthcoming.
To learn more about the series visit bpl.org/sargent, opens a new window, or bpl.org/events, opens a new window. Patrons can also learn more about the Sargent gallery in the BPL’s Art & Architecture booklet, opens a new window, generously sponsored by Bank of America, and on the BPL Blog, opens a new window.
Images available upon request at news@bpl.org
Previous