March 5th, 2020, is the 250th anniversary of the Boston Massacre. As one of the nation's premier repositories for materials documenting the history of colonial and revolutionary America, the BPL holds a trove of rare books, pamphlets, newspapers, and broadsides printed in direct response to the events of March 5th, 1770. The library also holds a significant collection of original letters and manuscripts that attest to the varying perspectives of the parties involved in, and affected by, the Boston Massacre.

A few highlights are presented below:

After the Boston Massacre on March 5th, 1770, Massachusetts Governor Thomas Hutchinson ordered the arrest of Captain Thomas Preston and eight of his soldiers for the crime of murder. Unable to acquire legal representation, Preston and the eight soldiers eventually petitioned John Adams to act on their behalf. A prominent Boston lawyer already active in the patriot cause, Adams agreed to represent the defendants, forming a legal team comprised of Sampson Salter Blowers, Robert Auchmuty, and Josiah Quincy. Preston was tried separately from his men, and all but two of them (Hugh Montgomery and Matthew Kilroy) were acquitted, while Montgomery and Kilroy were convicted of the lesser charge of manslaughter.

This twenty-page portion of Adams’ trial notes records details of testimony within the trial and shows Adams’ thoughts on and pretexts for his defense of the soldiers.

Paul Revere's engraving of the Boston Massacre, published just a few short weeks after the events it depicts, is one of the iconic images of the American Revolution. Revere produced the engraving to both commemorate and to inflame public opinion. Vilifying the British soldiers, the Bloody Massacre was an effective piece of propaganda for the patriot cause.

Though this engraving is one of Revere's most famous works, it was copied from an unpublished copper plate engraving lent to Revere by Henry Pelham. Revere's version was published on March 26th, a week before Pelham's.

A short narrative of the horrid massacre in Boston, perpetrated in the evening of the fifth day of March, 1770 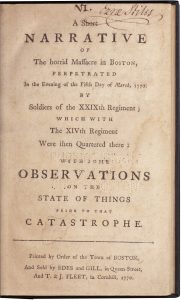 At a meeting on March 12th, the Boston Selectmen appointed Joseph Warren, Samuel Pemberton, and James Bowdoin to draft a report on the events of March 5th. Shortly after, that report was published in this pamphlet, along with 96 witness depositions.

Plan of the scene of the Boston Massacre 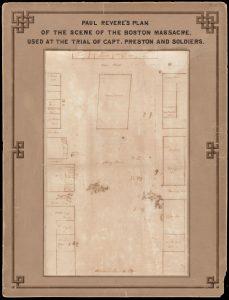 This sketch, showing the scene of the Massacre, has been attributed by scholars to Paul Revere himself. The sketch shows a bird's-eye view of the location of the line of British soldiers on King Street just after the incident on March 5, 1770. The bodies of Crispus Attucks, Samuel Gray, James Caldwell, and Samuel Maverick are labeled, as are the street names and the names of the owners of adjacent properties.

"Being moved and reduced by the instigation of the Devil, and their own wicked hearts" 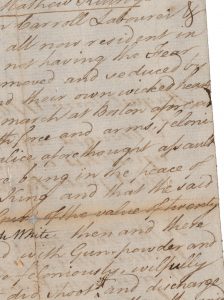 Among the many manuscripts related to the Boston Massacre, the BPL holds four official copies of the original indictment of Captain Thomas Preston and the British soldiers under his command.