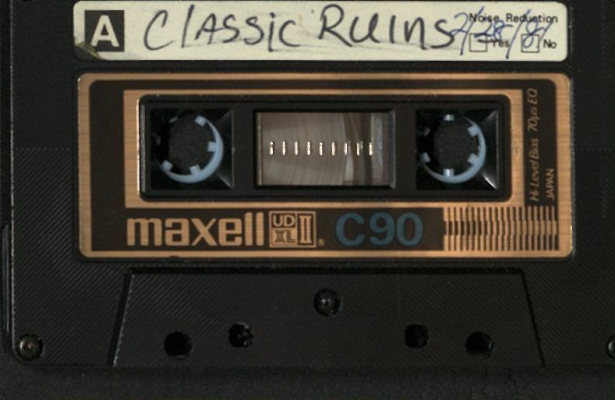 The BPL and Harvard Library have teamed up to co-host Boston Rock City, a guided exploration of Wikidata and local music history on May 21 and May 22. We invite wiki editors of all experience levels to join us for two rockin’ days of music and Wikidata editing. This project centers on the Arthur Freedman Collection at Harvard’s Loeb Music Library and Harvard Film Archive. This collection of video and audio cassettes captures over four decades of local rock and punk music performances. With your help, we can create a Wikidata presence for the bands and venues found in this collection.

Read on to learn about this extraordinary audiovisual collection, and find out how Wikidata can reveal connections within Boston’s musical history. And discover how you can help add Boston's rock history to Wikidata!

Arthur Freedman grew up in Newton, a suburb of Boston. As a teen, he started attending concerts in nightclubs like Cantone’s, the Club, the Rathskeller, Jonathan Swift’s, Jack’s and others. He had a front-row seat to the birth of Boston’s punk scene, and concluded that each show had a life of its own. He felt strongly that studio recordings could not capture the energy, exuberance, or creativity of a live concert. In the late 1970s, he bought a cassette deck and microphones and started to record local rock shows. In 1984, he purchased a video camera. For nearly four decades, Freedman was a fixture in Boston’s music scene, known for his devotion to recording these shows for posterity.

Freedman maintained a massive home archive of thousands of videotapes and audio cassettes for decades before donating this collection to Harvard in 2011. His audio recordings of local rock, dating back to the late 1970s, now reside at Harvard’s Loeb Music Library. Another collection at the Harvard Film Archive consists of over 2,000 hours of filmed rock performances. These materials also include fliers and set lists for some of the shows. You can read even more about this impressive collection on the Loeb Music Library blog post.

Wikidata describes itself as a free, collaborative, multilingual, secondary database. Wikidata collects structured data to provide support for Wikipedia, Wikimedia Commons, the other wikis of the Wikimedia movement, and to anyone in the world. (It’s also used by commercial web services that you may have encountered in your day to day life.) What does this mean? Let’s break it down:

So how does Wikidata work?

The Wikidata repository consists mainly of items, the most basic unit of knowledge in Wikidata. An item represents a real-world object, concept, or event. Each item has its own page and is given a unique identifier, or computer-readable name; the identifier is always an alphanumeric sequence that starts with the letter ‘Q.’ This is computer-friendly, but not so helpful for humans. So editors add labels, or human-readable names, for each item.

Editors also add a series of statements, which describe characteristics of an item. Each statement consists of a property and a value. Think of the property as the category that describes the value; the value is the piece of information in the statement. For example, let’s look at the Wikidata entry for the Rathskeller, a famously gritty rock venue in Boston from 1974 to 1997:

The first two statements, both using the property “instance of”, point to two other Wikidata values, “human-made geographic feature” and “music venue”. Other properties use dates—“date of official closure” has the value “1997”—or other value types, like geographic coordinates. Specific statements like this can be used to make a list of all the music venues that have ever existed in Boston, or place them on a timeline visualization, or generate a map of where they were.

Where it gets really powerful is that a Wikidata item for the Rathskeller can be the object of statements about other Wikidata items. An item describing an event can point to the Rathskeller as its location, for example. And that item can also include statements about which bands played, and the items about bands can say who played bass or what genre of music they made. So, with sufficient data, we can use Wikidata’s query service ask some really weird questions, like “Which paintings depicting music instruments are connected to the city of Hamburg in some way?” or “Where have trees grown from seeds that have orbited the moon in a spacecraft been planted?” or “How many articles have been co-authored by researchers from Technical University of Denmark and University College or London?”— but about Boston punk bands. We just need to create more data! That’s where you can help us.

Get Involved: Explore Wikidata and Learn about Local Music

The team at Harvard has some wish lists of bands, venues, and events documented by Freedman that they’d like to see represented in Wikidata. Right now, most of this information can be found in Harvard Library’s finding aids. A finding aid is a document that expresses what objects can be found in a given archival collection. These documents help researchers understand the nature of a collection. So for example, you can use the finding aid for the Freedman audio collection to browse a list of intriguing cassettes. But if you want to find out which of the bands on those tapes shared drummers, or which record labels released their studio albums in Europe, you’ll need the data in a much different shape to answer those questions.

This is where you come in! Join us on May 21 and May 22 for Boston Rock City: Explore Wikidata and Learn about Local Music. Together with our friends at Harvard, we’re co-hosting this virtual two-day Wikidata edit-a-thon. During this time, we’ll do a deep dive into the Freedman Collection. We’ll also show you how to create Wikidata items and statements using finding aids and other data sources. Did we mention that we’ve got curated playlists to keep you bopping while you edit? And at the end of each day, we’ll use some snazzy Wikidata visualization tools to show off the progress we’ve made together! It’s drop-in friendly, so pop in and check it out as you can.

Please register for this free event. We look forward to seeing you there!