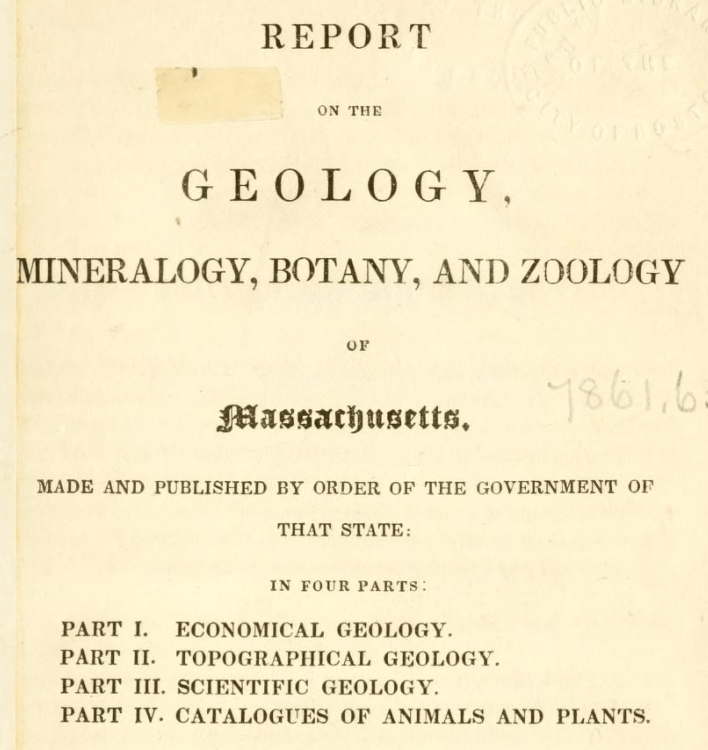 In June of 1830, Governor Levi Lincoln Jr. appointed Amherst professor Edward Hitchcock to conduct the first geological survey of Massachusetts. In 1831 the scope of the project was expanded to include production of a list of plants and animals found in the Commonwealth, for which he drew on the “assistance of several gentlemen distinguished for their acquaintance with particular branches of natural history.” (Emerson 1839)

In 1833, Hitchcock delivered his final report, entitled Report on the Geology, Mineralogy, Botany, and Zoology of Massachusetts, Made and Published by Order of the Government of that State. You can read the BPL’s digitized copy on the Internet Archive.

Associated with the survey report was an 1832 geological map of Massachusetts, an enlargeable reproduction of which may be viewed through the Norman B. Leventhal Map & Education Center by clicking the image below. 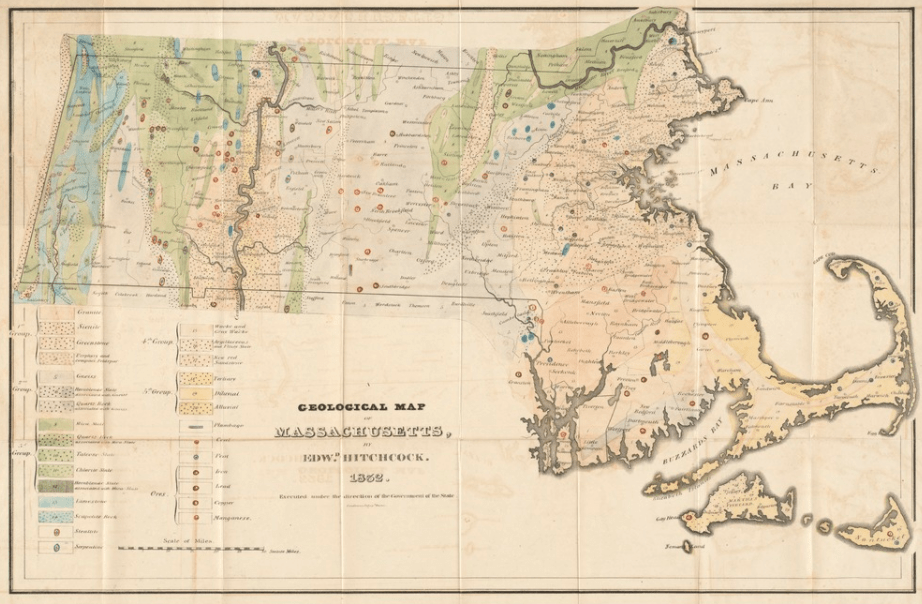 The survey was not wholly an exercise in pure science; part I of the report, "Economical Geology," is devoted to describing economically valuable and useful rocks, minerals, and ores. Following this section is a painstaking description of topography, geological formations, and rocks and minerals across the Commonwealth.

Hitchcock’s report is quaintly archaic in places; in this time before the ice ages were accepted knowledge, Hitchcock attributed glacial striations like those below to massive flooding, and referred to them as 'Diluvial Grooves': 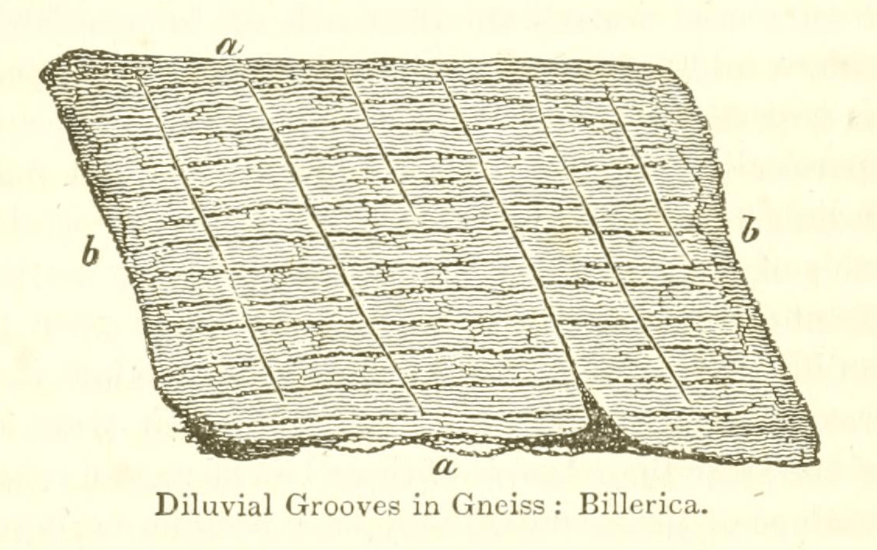 As gratifying as the first survey’s results were, Hitchcock and those who assisted him felt there was more work to be done. A legislative committee was appointed to investigate the desirability of a new and expanded geological and biological survey. It worked closely with a parallel committee from the Boston Society of Natural History (BSNH), and found itself positively inclined towards further efforts.

In February 1837, the committee reported that “the Natural History of Massachusetts affords a broad, useful and most interesting field for research, where as yet, but little has been done.”

The more vociferous Augustus A. Gould, writing on behalf of the BSNH, added in the gendered language of his time that:

We may safely say, that eight years ago there was no man, nor body of men, who could give us any tolerable list of the animals and plants of Massachusetts. And even now, we believe that our objects of natural history, are better known in Sweden and France than in Massachusetts.

It is very desirable, that every considerable animal, and every plant in the State, should be collected, determined, described and catalogued. It must and will be done; and if we neglect it, strangers will bear away the honor.

Gould would go on to write the survey report on molluscs.

The legislature was convinced, and in 1837 resolved to pursue “a further and thorough Geological, Mineralogical, Botanical and Zoological Survey of this Commonwealth.”

Hitchcock was again put in charge of the geological component, and a sizable crew was assembled to take care of the botanical and zoological survey.

About a year later the crew submitted progress reports to the Governor, but many begged for more time to complete their work. The publication dates of their eventual final reports bear witness to the time required by each:

1839. D. Humphreys Storer’s Reports on the Ichthyology and Herpetology of Massachusetts.

1839. William B. O. Peabody’s Report on the Ornithology of Massachusetts.

1841. Augustus A. Gould’s Report on the Invertebrata of Massachusetts, Comprising the Mollusca, Crustacea, Annelida, and Radiata. BPL has digitized its 1870 copy of the second edition.

1846. George B. Emerson’s Report on the Trees and Shrubs Growing Naturally in the Forests of Massachusetts. An 1894 fifth edition, featuring some nice color plates, has been scanned by the BPL: see Volume 1 and Volume 2.

At long last, the first great effort to catalog and describe the living (and geological) world of Massachusetts was completed.

If you're interested in more history of geology, take a look at this list of books at the BPL. For more on the quest to describe and name the world's biodiversity, The Species Seekers is a great place to start. Thanks for reading!