By 1899, the tide of public opinion had turned against the house sparrow, known at that time as the English sparrow. The Globe called the birds "notoriously unclean" and an "esthetic disgrace to Boston," decrying everything from the "unsightly heaps of refuse which the sparrows construct and use for nests" to their role as "mobber and robber of hosts of native song birds."

500 eminent citizens of the city, "including a bishop," appealed to Mayor Quincy to take action against the birds, and on March 3rd the mayor gave orders to "begin the work of exterminating the English sparrow."

At least one editorial writer critiqued the plan as "inhuman and barbarous," but on March 13 staff of the public grounds department began a campaign to destroy the house sparrow nests on the Common, and on March 17 they shifted operations to the South End.

Opposition was swift, led by George T. Angell of the Massachusetts Society for the Prevention of Cruelty to Animals, and on March 18 and again on March 23 the friends of the sparrow marshaled at hearings at City Hall to call for an end to the campaign.

Finally, on the evening of April 5, Mayor Quincy called an end to the destruction of nests and ordered the staff of the public grounds department back to their ordinary duties.

Read the full coverage of the Sparrow War through ProQuest Historical Newspapers: The Boston Globe, accessible with your BPL card or eCard and PIN.

With the extermination campaign a failure, the stage was set for the sparrows to persist as they have to the present day.

But they remained a convenient subject of public discourse. A 1909 Globe discussion equated the house sparrows with unwanted human immigration, and in the nineteen-teens through nineteen-forties a house sparrow named 'Bully' played the villain in bedtime stories published in the Globe.

Today, it seems, the public and authority are resigned to the house sparrows' presence. The birds are everywhere, and it is doubtful whether efforts to remove them would stand any chance of success.

In 1973 the publication Ornithological Monographs published "A Symposium on the House Sparrow (Passer domesticus) and European Tree Sparrow (P. Montanus) in North America" (accessible through JSTOR), in which Chandler S. Robbins offered the following commentary on the convoluted saga of the house sparrow:

The multiple introductions of Passer domesticus into North America are a classic example of how man, with utter disregard for the long-term effects of his irresponsible acts, has permanently altered the ecology of an entire nation and almost an entire continent.

So the next time you see a house sparrow hopping around Boston, remember that his or her kind are relative newcomers to this city, and think back on all the history and all the spilt ink these omnipresent, nondescript little birds represent and embody. 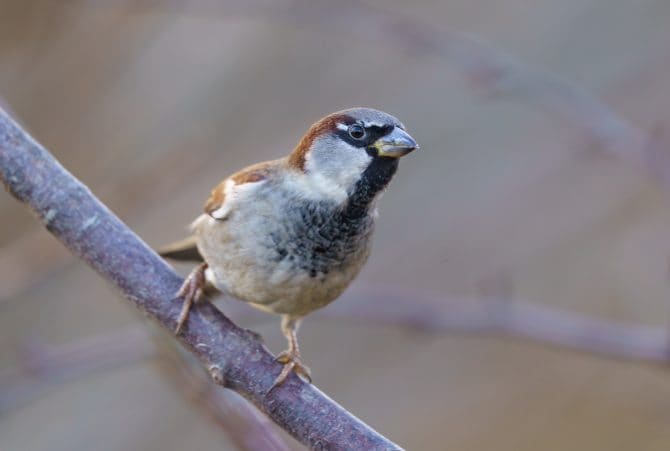