The book of hours is a collection of Christian devotional, opens a new window texts that was widely popular during the late Middle Ages and Renaissance. Books of hours were intended to help devout laypersons connect with one of the central obligations of monastic life: the ritualized cycle of daily worship known as the Divine Office, opens a new window, or Liturgy of the Hours. Books of hours provided a simplified set of texts and prayers that allowed readers -- who were usually neither priests nor monks -- to incorporate aspects of church ritual into their own lives; they facilitated quiet prayer and encouraged private reflection, often through the interplay of text with evocative images, as in the example at the top of this page.

Though books of hours served a spiritual purpose, they were produced commercially and were generally quite expensive. But among those who could afford to pay, books of hours became essential -- even fashionable -- aids to private prayer and were produced in vast numbers between the 13th and 16th centuries.

Some degree of the book of hours' popularity must have been due to the fact that its contents were highly customizable. The language, imagery, script, and even the contents of books of hours were all, to at least some degree, variable. Copies could be tailored to suit the devotional needs of specific groups of people, or they could be made to please particular individuals. The style and overall quality of decoration might reflect personal preference, local tradition, or simply what a particular buyer could afford to either commission or purchase ready-made. Many books of hours are thus unadorned and modest, while others are conspicuous in their luxury, with the finest examples preserving masterpieces of medieval painting and illumination.

Other differences between books of hours arose from the need to accommodate the diversity of regional worship. Within the medieval church, certain aspects of the liturgy were determined, to at least some degree, by local custom, and individual books of hours were made to reflect these variations. Thus, a book of hours intended for the "use" of Rome will differ from a book of hours made for the use of Paris, or Utrecht, or Sarum (Salisbury). These differences might be reflected in the order and wording of certain prayers or the veneration of local saints or religious events.

Entire cycles of prayer could also be added or excluded based on personal preference, as could a variety of additional texts. These customizations can provide further clues about the origin of specific books of hours and their earliest owners.

Precisely because these books were so frequently personalized, they offer modern readers a kind of window into the varied lives and pious practices of medieval laypersons; as frequent objects of conspicuous consumption sought out by the elite across much of Europe, surviving books of hours also preserve a detailed survey of medieval art and scribal practice.

Picturing Prayer: Books of Hours at the Houghton Library., opens a new window An excellent introduction, with helpful examples of the various individual texts found in most books of hours.

The Book of Hours: a Medieval Bestseller., opens a new window An introductory essay, with examples from the collections at the Met.

Book of Hours: Basic and Advanced Tutorials. , opens a new windowDetailed essays on the history and contents of books of hours from Les Enluminures.

Medieval Books of Hours at the Public Library of Bruges. An informative video that explores the typical contents the book of hours and the ways that readers interacted with them.

Finding books of hours at the BPL

There are 33 books of hours in the BPL's collection of medieval and early renaissance manuscripts, opens a new window. 21 of these are bound and are more or less complete. The remaining 12 are fragments only -- mostly single leaves or small sections of books. BPL's manuscript books of hours date from the early 14th century through the end of the 15th century, and were created in Italy, Germany, France, Belgium, the Netherlands, Spain, and England.

To search for the fragments only, change "not subject" to "and subject." To see a list of both the fragments and complete copies at the same time, delete the subject limiter from the search altogether. Please note, the same strategy will work for other kinds of manuscripts in the collection, including breviaries, missals, antiphonaries, graduals, etc.

Although the BPL's books of hours have not yet been digitized, study images of each individual manuscript are available on request, opens a new window. Study images document bindings, decoration, and scripts, along with pertinent marks of provenance and many other localizing features, including litanies and calendars.

Below is a gallery of sample images showing decorative elements and highlights from the BPL's collections. Click on each thumbnail image to enlarge; right-click on the enlarged image and open it in a new tab to see a full-sized version. Full descriptions for each of the books shown below can be found by doing an "any field"/keyword search for its call number in the research catalog, opens a new window. 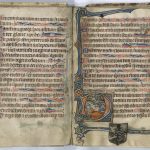 MS q Med. 124, fol. 6v-7The initial “D” in the lower left of the page at right encloses a nativity scene, in which the infant Jesus, in the manger, is surrounded by Mary and Joseph. 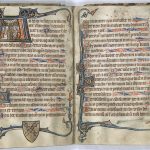 MS q Med. 124, fol. 41v-42The initial “A” in the upper left marks the beginning of the 15 Gradual Psalms and encloses a depiction of the Ascension of Jesus into heaven. Note, too, how every possible blank space is filled, either with gold (which appears brownish in these images), with pigments, or with red and blue penwork. 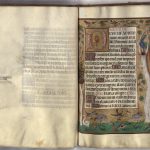 MS q Med. 88 fol. 58v-59In addition to the calendar, important prayers and divisions of the text are highlighted with elaborate borders. 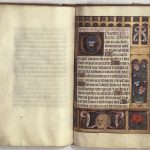 MS q Med. 88 fol. 109v-110The Office of the Dead — a cycle of prayers for the souls of the deceased — is included in nearly every book of hours. Here, the illuminated border of the first page is decorated with symbols intended to remind the reader of his or her own mortality. 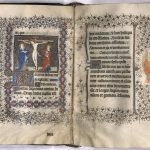 MS q Med. 81 59v-60On the left, a miniature depicting the Crucifixion marks the beginning of the Hours of the Cross. Note how the floral borders are both lavishly decorated, but in patterns that are unique to this specific opening of the book 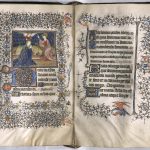 MS q Med. 81 37v-38On the left, the Coronation of the Virgin marks the beginning of Vespers, or evening prayers. 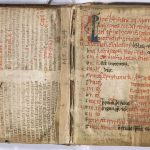 MS q Med. 131 fol. 1The first page of the calendar, at right, shows the beginning of the month of January. In addition to listing the days of each month, as in a modern calendar, the medieval calendar charted the course of the church year, tracking celebrations of important saints and other feast days. 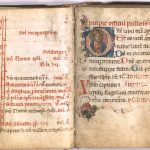 MS q Med. 131 fol. 12v-13At left, the end of the calendar section, with the beginning of the Hours of the Passion, on right. The roman numerals in the left margin of the calendar and the column of repeating letters, a-g, are part of a complex mathematical apparatus for determining lunar time and calculating the date of Easter, which varied from year to year. 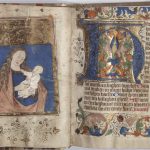 MS q Med. 149 fol. 13v-14An illuminated miniature of the Virgin and Child, at left, opposite the beginning of The Hours of The Virgin, which are here marked with a large, illuminated initial and decorative border. 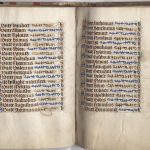 MS q med. 159 fol. 73v-74An opening from the litany. Most books of hours included these lists of saints to whom the reader prayed. Litanies in books of hours contained both universally venerated saints, and others with highly specific local significance. 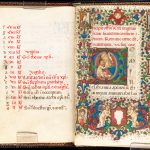 MS q Med. 136 fol. 23v-24This Florentine book of hours was illuminated by Antonio di Niccolò di Domenico. Here, the final page of the calendar, and the first page of the Hours of the Virgin, showing the Virgin and Child. 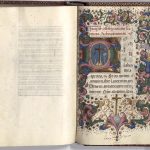 MS q Med. 136 fol. 134v-135The Hours of the Cross, here marked with a floral border and a small crucifixion scene inside the initial “D” 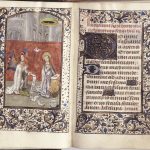 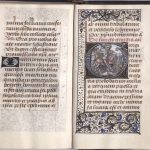 MS q Med. 137 fol. 200v-201This illuminated initial “G” encloses an image alluding to the legend of Saint George, who is shown on horseback, slaying a dragon as it was about to eat the princess, shown kneeling in the background. 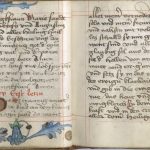 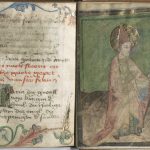 MS q Med. 242, fol. 86v-87A section of various prayers to the Virgin Mary ends with a miniature showing St. Peter holding his key. The painting and illumination has sufficiently worn away to reveal the outlined sketch below. 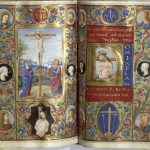 MS q Med. 200, fol. 205v-206The beginning of the Hours of the Cross are marked with elaborate depictions of the crucifixion 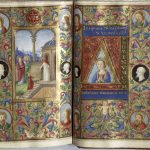 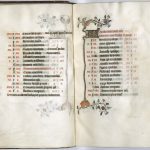 MS q Med. 90 fol. 3v-4A page from the calendar, showing the end of March, on the left, and beginning of April, on the right. 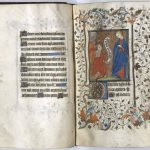 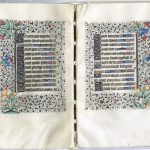 MS q Med. 89, fol. 139v-140A portion of the litany. A list of saints’ names to be invoked during prayer, this section of the book was also highly customizable. Certain major saints were universally venerated and included in all litanies. The inclusion of locally venerated saints can help identify the specific use of a given book of hours. 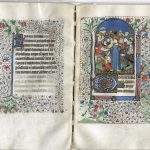