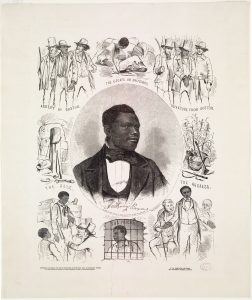 This week marks the 166th anniversary of one of the most dramatic sequences of events relating to slavery and abolition in Boston’s history.

On May 24, 1854, escaped slave Anthony Burns was arrested by Federal agents, ostensibly for robbery, but in fact to return him to his ‘owner’ under the Fugitive Slave Act.

After an unsuccessful attempt to free Burns from imprisonment on May 26, a declaration of martial law and intervention by President Franklin Pierce ensured that Burns would be tried.

On June 1 Judge Edward G. Loring ordered that Burns be returned to his ‘owner,’ and the next day thousands of Bostonians lined the streets in lamentation as Burns was led to the ship that would return him to enslavement.

But his story had a happy ending. Boston abolitionists raised money to buy his freedom, and by February 1855 he returned to Boston a free man. 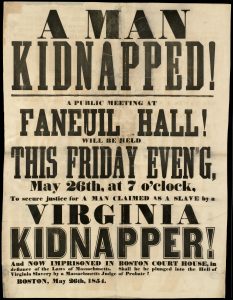 Learn more about Anthony Burns and the extraordinary events surrounding his trial with some of these online resources from the Boston Public Library:

And to learn more about the history and influence of slavery in the United States generally, explore one of the lists below as an entry to the multitude of eBooks available through the BPL: