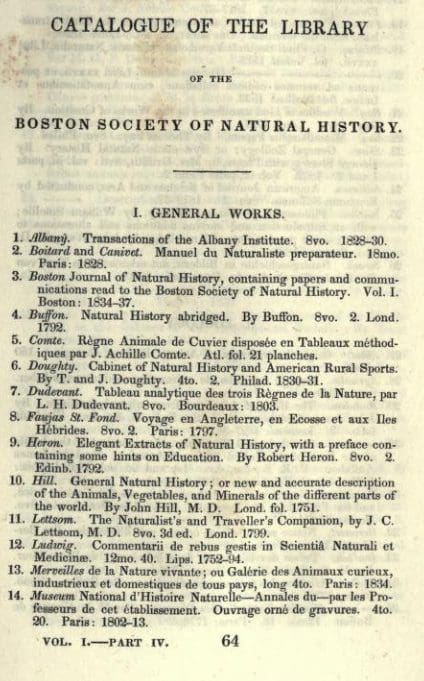 When I came across a ca. 1837 catalog of the library of the Boston Society of Natural History (BSNH) in the BPL's collection, I was immediately fascinated. Here, in a numbered list of 314 items, was a picture of the state and availability of scientific knowledge in the City of Boston in the first half of the nineteenth century. It had been assembled by donation from the Society's membership for its common usage and edification.

Shortly thereafter I found a digitized version of the catalog, a consequence of its inclusion in the first published volume of the Boston Journal of Natural History. Not being a rare books librarian, I'm generally more interested in the content of works than in their uniqueness as individual items. So it occurred to me that it should be possible to virtually 'visit' the library using digitized copies of identical editions from libraries and other institutions around the world.

How is this possible? Well, many libraries and similar institutions make digital reproductions available online. These generally live in repositories like HathiTrust or, in the case of the BPL, in the Internet Archive and Digital Commonwealth. In addition, there are other projects that collect and represent the contents of repositories with an additional 'layer' of organization or searchability. These include things like the Digital Public Library of America or (more relevant for us) the Biodiversity Heritage Library.

The Biodiversity Heritage Library supports life sciences research by parsing relevant literature and making details like species names more readily findable in books and periodicals digitized by a huge range of institutions. In fact, many items from the Boston Public Library have been 'ingested' and made discoverable in the Biodiversity Heritage Library. Thanks to the work of all of these institutions and projects, materials in collections around the world can now be discovered, used, and appreciated by anyone with an internet connection.

Keeping in mind that these aren't the exact copies we would have seen there, we can use the riches of mass digitization to simulate what we would have found in the 1837 library of the BSNH. But first, a little scene-setting:

Founded in 1830, the BSNH had by 1833 moved into rooms on the third floor of the building of the Provident Institution for Savings, a savings bank. (This was decades before the Society moved into its own building on the corner of Boylston and Berkeley, now a furniture store). To get there, you'd head up Tremont Street past the Common and Park Street Church, headed towards what is now (but was not then) Government Center. The building would be located on your right, just past the King's Chapel burying ground.

The importance of the library to the Society and its members was articulated by Augustus A. Gould in some 1842 remarks on the Society's progress:

When the Society originated, the great difficulty in the way of making advances in the study of Natural History, was the want of books. No one possessed more than a few volumes on some subject to which he might have given his individual attention…It is of vital importance that the naturalist, who is engaged in the investigation of any subject, should be able to know all that has been written upon his subject. Scientific books are expensive, and no man among us can promise himself such a library as he may need. It is the part of wisdom and interest, therefore, to collect the volumes, which are scattered here and there, into one common stock. They will thus be vastly more useful than when shut up in private libraries.

So let's imagine ourselves as 1837 natural historians, poised on the edge of modern science as we know it and thirsty for knowledge from scarce and scattered books. Join us next time as we see what we find within this long-gone library.