The vast and varied resources of the BPL make all kinds of interesting discoveries possible, including some that hit rather close to home.

As I browsed Janet Davis’s Gospel of Kindness in connection with a previous post, I became interested in the publications of early local animal welfare organizations. It turns out that the BPL has physical copies of many of these publications. The Massachusetts Society for the Prevention of Cruelty to Animals published the now strange-sounding Our Dumb Animals. Another group, the New England Anti-Vivisection Society, published the Animals’ Defender. Portions of both of these publications can also be read through the digital repository HathiTrust. Note: Vivisection is the practice of performing operations on live animals for experimental or scientific research.

It was in the June 1898 issue of the Anti-Vivisection Society’s journal that I came across the following entry in a section entitled “What We See:”

It seemed that Harvard Medical School was being accused of abducting people’s pet dogs and cats for purposes of experimentation. But it was the location described that stood out to me most of all. It sounded awfully like the intersection at the northwest corner of the Central Library. This is where the Central Library's newer building now sits.

I hopped onto the Leventhal Map and Education Center tool Atlascope to investigate. I found what I was looking for in an 1898 fire insurance atlas. There was Harvard Medical College sitting right next to the newly built McKim building of the BPL’s Central Library:

Here’s what it looked like from the street. This is exactly where the great granite edifice of the Boylston Street Building now stands (this image predates the McKim building): 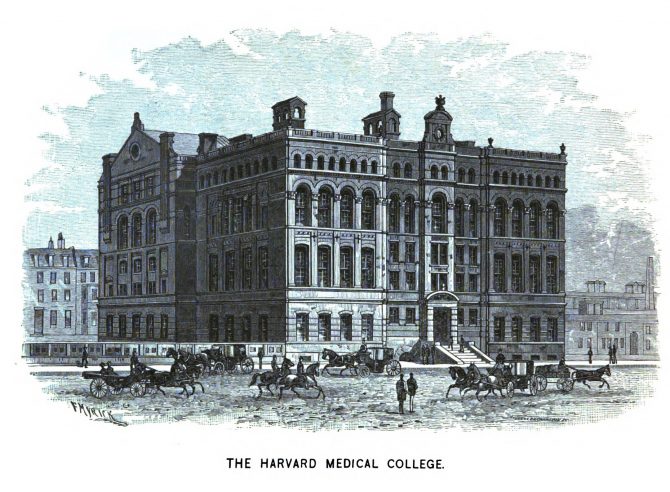 It was here, in the college's physiological laboratory, that the allegedly abducted dogs met their fate. They were strapped alive into experimental apparatuses like the one shown below. This image comes straight from the laboratory’s Collected Papers:

Testimony summarized in the Animals' Defender in 1902 provided details about some of these experiments. It revealed that experiments at the lab were often conducted on live animals without anesthetic.

Noble as their cause may have been, though, the anti-vivisectionists were not without flaws of their own. For example, as their publications make clear, they were generally opposed to vaccinations. This was presumably because of the animal testing involved. But it led them to argue against vaccines' efficacy and validity as well. They seem to have been blinded to the truth by their commitment to their original cause.

Animal experimentation remains a controversial subject today. Supporters argue that these experiments are necessary to develop lifesaving medical treatments. Detractors argue that animals are poor models and are subjected to undue suffering. Learn more about this complex issue with the titles below: