In late spring 1952, a bird whose leg-ring read AX6587 had a fateful meeting with a Bostonian named Rosario Mazzeo. The bird was a Manx shearwater, a species of seabird related to the more well-known albatrosses, and Mazzeo was a clarinetist and personnel manager for the Boston Symphony Orchestra.

Their lives were separated by thousands of miles and tens of millions of evolutionary years. What was it that brought these two very different creatures together?

Mazzeo was also an amateur ornithologist, and it was this that brought him to Skokholm, an island off the coast of Wales, and into AX6587’s life. Researchers had been conducting tests of the homing ability of shearwaters, and Mazzeo had come to Skokholm to participate in an unprecedented experiment. 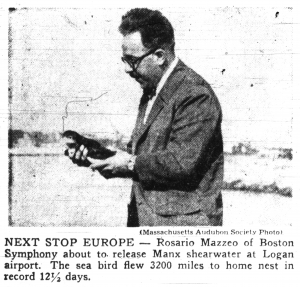 Mazzeo collected AX6587 and another shearwater and kept them in a box as he traveled by train to London, and then by plane back to Boston, where he arrived on the morning of June 3. Sadly, one of the birds did not survive, but AX6587 did. With the help of a Trans World Airlines driver, Mazzeo took the bird to the easternmost point at Logan airport, and there, at 8:15 a.m., Mazzeo released AX6587 and watched as it set off to the east.

Incredibly, Mazzeo’s collaborator found the bird back on its nest on Skokholm on June 16. As Adam Nicolson writes in The Seabird’s Cry, AX6587 “had travelled at least 3,050 miles in twelve days, averaging 250 miles per day without a single landmark to guide it.” For 1952, this was “by far the longest homing flight yet recorded and the first time any bird had been tracked across an ocean.”

Mazzeo published a short article about the event in 1953 in the ornithological journal The Auk, which you may read through JSTOR using your BPL card or eCard and PIN, and the Globe wrote it up in 1954. ("A Speed Record for Birds," by Earl Banner. Boston Globe, May 13, 1954, p. 21.) The image above comes from this Globe article.

How did AX6587 accomplish this incredible feat of endurance and navigation, and how do shearwaters and other seabirds continue to make such incredible journeys today?

Before pointing you to an array of resources about this amazing group of bird species, a special word about Adam Nicolson's The Seabird's Cry, where I first encountered AX6587's story.

Nicolson's work is remarkable in many ways, from its incorporation of poetry to the facility with which it explains scientific research in a way both rigorous and accessible. But its greatest strength for me is its recurrent reminder of the singularity and individuality of the birds it addresses. It resists and problematizes monolithic statements about species, and is always eager to share research that reveals the unique personalities and individual differences of these remarkable creatures. A quote on northern gannets is illustrative:

The sea does not make ‘the gannet’. It makes hundreds of thousands of gannets, each an individual. Gannets are booming at the moment in the North Atlantic, individual birds making individual choices, conducting individual struggles and achieving individual triumphs.

To me, this is nature writing at its most perceptive. Enjoy this and other works on the remarkable lives of seabirds through the list below. Don't miss the wonderful article on the seabirds of Stellwagen Bank from a 2017 issue of Massachusetts Wildlife.