On the 11th of June 1835, alleged pirate captain Pedro Gibert and four of his crew members were executed in Boston. According to Boston chronologist Jim Vrabel, this was the last year in which pirate executions took place here, and while there was apparently one more case in September of that year, these five men can certainly be described as among Boston's last pirates.

For those living at the time, of course, it would not have seemed like the end of an era, but like just another episode in over two centuries of European and Euroamerican piracy on the East coast of the Americas. Learn about this trial and about the broader contexts of this striking and much-dramatized portion of our region's history with the BPL and open access resources below:

Don Pedro Gibert and the Panda

Pedro Gibert and his crew, aboard the schooner Panda, were accused of robbing the Salem ship Mexican and then attempting to incinerate it with its crew still onboard. Though the captain and four of his men were condemned and executed, they maintained their innocence to their graves.

Pirates in Boston and New England

Discover the doings and deeds of other pirates connected to Boston and the broader region with some of these other great BPL resources:

A classic history of the pirates of the region, formatted for eBook reading and available through Hoopla.

Places Euroamerican piracy in a broader sociopolitical context. It reveals the unofficial and perhaps unintentional contributions of pirates to the expansion of the British imperial project, as well as the curious tendency of pirates to pop up in unexpected places. For example, Samuel Moseley, a Braintree native turned West Indies pirate, returned to Massachusetts and led a paramilitary force of child soldiers and pardoned pirates against the Wampanoag and other indigenous people during Metacom's War (also called King Philip's War) in 1675-76, and became infamous for his excess and cruelty. Available through Hoopla.

The interesting tale of how the Continental Congress authorized piracy in all but name against the British during the Revolutionary War, allowing for the accumulation of great sums of wealth through seafaring plunder. As the book's description notes, "Vast fortunes made through privateering survive to this day, among them those of the Peabodys, Cabots, and Lowells of Massachusetts, and the Derbys and Browns of Rhode Island." eAudiobook available through RBDigital. 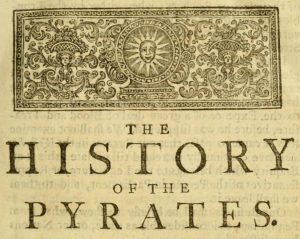 Among the countless wonders in the Special Collections of the Boston Public Library is this 1724 copy of A General History of the Pyrates, attributed to Daniel Defoe and included in the Trent Collection of Defoe and Defoeana.

Though not necessarily about piracy in this region, it covers some of history's most famous pirates, including Mary Read, Anne Bonny, and Edward Teach (Blackbeard).

Read contemporary reports of other Boston pirate trials, like The arraignment, tryal, and condemnation, of Capt. John Quelch from 1704, in Eighteenth Century Collections Online.

One of the most notable pirate-related incidents in Massachusetts history is the 1717 sinking of the pirate ship (and former slave ship) Whydah off the coast of Cape Cod, which took with it both its captain, Samuel Bellamy, and over four tons of silver and gold. The story of this ship and the subsequent rediscovery of its wreckage are the subject of the resources below: