Populations and subspecies of mountain lions once ranged across the length and breadth of both American continents, and the creature was indeed “the most wide-ranging species of mammal in the western hemisphere.” (1) They were thus appropriately known by a variety of names, including cougars, catamounts, pumas, and (especially in Florida) panthers.

I will not say that I ever saw any my selfe, but some affirme that they have scene a Lyon at Cape Anne, which is not above six leagus from Boston : some likewise being lost in woods, have heard such terrible roarings, as have made them much agast; which must either be Devills or Lyons; there being no other creatures which use to roare saving Beares, which have not such a terrible kinde of roaring : besides, Plimouth men have traded for Lyons skinnes in former times.

That they were in fact present is without question, for the U.S. Fish and Wildlife Service notes that “at one time, they lived in every Eastern state in a variety of habitats including coastal marshes, mountains and forests.” (3)

But like most large animals of Eastern North America, a combination of hunting and habitat destruction soon drove them out of their former range. The last mountain lion in Massachusetts was killed around 1858, and the last records in all of the Northeast are from New Brunswick in 1932 and Maine in 1938. (1) 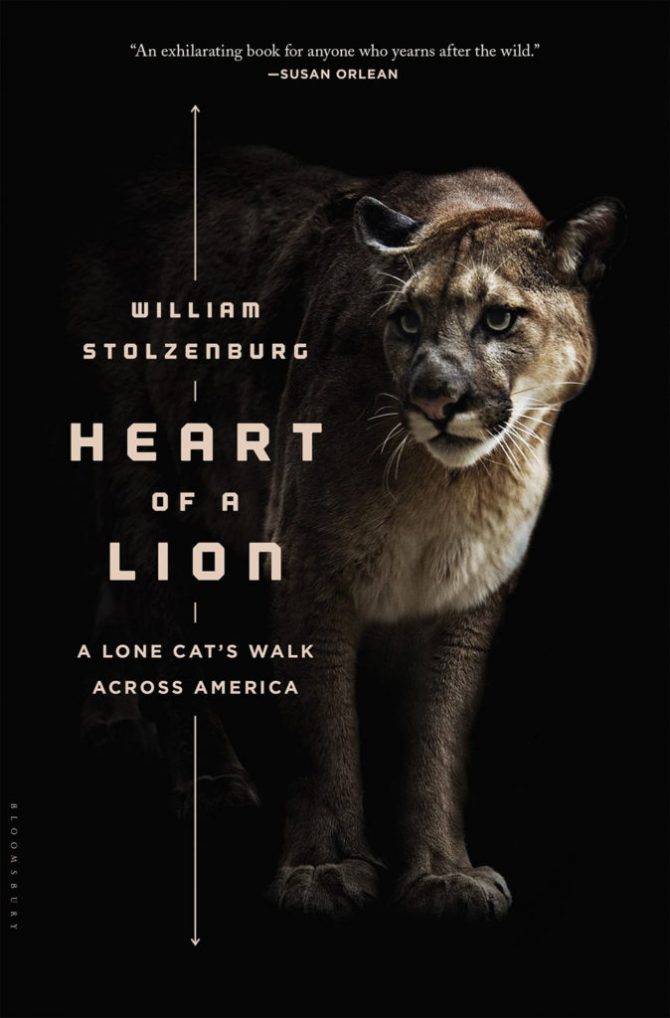 There were very few reports of eastern mountain lions from the late 19th century to the 1950s. Then came an increase of press coverage, writers’ assertions, and “sighting reports [that] were accepted without verification.” These led to the placement, in 1973, of the eastern cougar on the endangered species list, “despite a lack of empirical evidence showing that populations existed at that time.” (4)

Unfortunately, over 90 percent of alleged sightings proved to be of other types of animals, including bobcats, deer, bears, and even domestic cats and dogs. The few actual records of mountain lions are either of animals released or escaped from captivity, or else animals dispersing from the West. In the latter category is the male mountain lion that made its way from its birthplace in South Dakota all the way to Connecticut, where it was killed on a highway in June 2011. That animal’s remarkable journey is recounted in William Stolzenburg’s terrific Heart of a Lion (right).

After further review, the Fish and Wildlife Service decided to remove the species from the endangered species list in 2018, having found “no evidence that a population of cougars survived in the historical range of the eastern cougar.” (4)

The Persistence of Rumor

There remain some holdouts who persist in their belief in (and search for) mountain lions in the Northeast. There are even some conspiracy theorists who allege that state and Federal wildlife agencies are covering up evidence of eastern cougar populations for political or other reasons. (1)

The official response seems to be one of bemusement. The Mass. Division of Fisheries and Wildlife maintains a page with the provocative title “Are there Mountain Lions in Massachusetts?” that begins by bluntly stating: “There is no evidence of a reproducing Mountain Lion population in Massachusetts.” Further in comes the deadpan statement that “MassWildlife cannot investigate or confirm Mountain Lion reports without any evidence.” (2)

There seems, alas, little hope that we can name mountain lions among the residents of the Commonwealth. But we can still appreciate their abilities and marvel at their tenacity. And we can still hope that perhaps one day, like the deer and the turkeys, these creatures may find their way back to one of their former homes.

(3) and (4) linked through the FWS Eastern Cougar page.