The French were the first to settle in much of Canada and parts of Maine. Their descendants include: French Canadians, Acadians/Cajuns, Louisiana Creole, and Huguenots. If your ancestors came from any of these groups, there are a lot of resources to help you in your search. 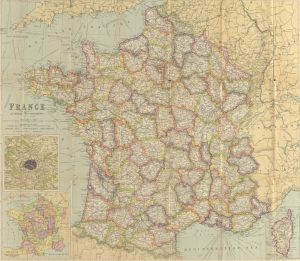 Books at the BPL

Acadians descend from French colonists that settled in Acadia in the 17th and 18th centuries. Some may also be descended from the native people that lived in the region. Acadia was comprised of what is now Nova Scotia, New Brunswick, Prince Edward Island, part of Quebec, and Maine to the Kennebec River. Nearly 12,000 Acadians were expelled from the region during the French & Indian War, due to British fears that they were loyal to France. Many were recruited by Spain to re-settle in what is now Louisiana. Their descendants, the Cajuns, established a culture that still thrives today.
View Full List

French-Canadians descend from the French settlers in Quebec and other parts of Canada. They live mostly in Quebec, and make up the majority of native French speakers that live in Canada today. Quebec is the second-largest province in Canada. It is also the only Canadian province with a primarily French-speaking population.
View Full List

The Huguenots were French Protestants. They suffered persecution in Catholic-majority France. Because of this, many of them fled France to settle elsewhere in the 17th century. The first wave of Huguenots arrived in the U.S. in 1624 and began settling first in New York and New Jersey. After resettling, most Huguenots assimilated with existing Protestant groups in their new countries.
View Full List

The Louisiana Creole descend from the inhabitants of Louisiana before 1803. They are a mixture of French, Spanish, Native American, or African descent. Creole culture is thus itself a blend of many cultures with a long and rich heritage.
View Full List