This is a new blog series we're doing on religious and cultural holidays/celebrations that are commonly celebrated in Massachusetts to help create awareness for these traditions and their origins. If there's a particular religion or celebration you or someone you know participates in that doesn't appear on this list, let us know by leaving a comment on this post. Or, if you think we got something wrong, please also comment and let us know. We try to be as accurate as possible, but if there's a mistake, we want to correct it.

Diwali is the Hindu festival of lights. The word "Diwali" translates to "row of lamps." Observers light candles, and lamps as a part of the celebration. The date for Diwali changes each year, because the Hindu calendar is based on the lunar cycles. Diwali celebrates a couple of events:

Today, Hindus in the United States celebrate Diwali in their home, or in the temple. In their home, they might light candles, have a family gathering, and eat special foods they have prepared. At the temple, people participate in Chopda Pujan, a blessing of checkbooks to pray for wealth in the coming year. As a part of the blessing, fruits are placed on each checkbook. The goddess Lakshmi blesses the checkbooks for the upcoming year.

Children can learn more about this festival here:

Sikhism is the world's fifth-largest religion; 23 million people observe this religion. The word "Sikh" means "disciple" or "learner." Sikhs believe there is only one God, who is the same God for people of all religions. Sikh men wear turbans to cover their hair, as a part of their religion. The turban design represents a commitment to equality and justice. Unfortunately, many Sikhs have been mistaken for terrorists because of their turbans.

Sikhs celebrate this day with candles and fireworks. It is also a day for hope. Many Sikhs go to their local temple, seek blessings, eat prepared food, and light candles or fireworks. Some Sikhs choose to make pilgrimage to the Golden Temple; the most important pilgrimage site in Sikhism. The temple is lit up with lights as a part of this celebration of good over evil, light over darkness.

To learn more about the religion, here are a couple of books you may want to read:

Annakut is a Hindu holiday. It is the Hindu New Year, which occurs the day after Diwali. Diwali symbolizes the triumph of good over evil, and the birth of Lakshmi. So Annakut symbolizes starting a new year on the right foot; with good victorious over evil. On this day, Hindus exchange gifts and money with their friends and family. They also call (or text) all their friends and family members to wish them a happy New Year. Besides wishing them a happy New Year, they are expected to ask their elders for blessings for the coming year on this day. 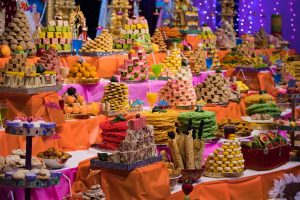 Some people go out and buy salt first thing in the morning. The origins of this practice are uncertain. But one theory is that bringing new salt into the home, brings the goddess Lakshmi into your home. Salt is created by churning ocean water, and Lakshmi first appeared when the gods churned the ocean after a great flood. As a result, salt is associated with the goddess. Lakshmi is associated with wealth, so inviting her into your home should invite good fortune into your home for the next year.

At some temples, there are big and colorful food displays made of homemade sweets, that are offered up to the gods. Each hour, some of that food is "released from the gods", and given to the temple attendees to eat. Temple-goers also observe darshan. Darshan is the viewing of the statues made of the gods, which also involves praying to the gods. Temple-goers observe darshan each time they visit the temple; not only on holidays.

Hindu Festivals Throughout the Year