Lammas, also known as Lughnasad, or Lughnassadh, is a pagan holiday and one of the eight Wiccan sabbats during the year. Each sabbat marks a seasonal turning point. The sabbat occurs on August 1, which is about halfway between the summer solstice (Litha) and the fall equinox (Mabon). This holiday celebrates the grain harvest. Grain is a very important crop for most civilizations. If the grain was left in the fields for too long, or if the bread made from the grain was not baked in time, families might starve. 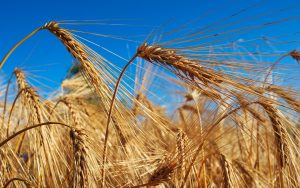 In early Ireland, it was not good to harvest grain before Lammas. If you did harvest before then, that meant that that the harvest from the previous year ran out before the next harvest was ready. This meant that the farmers would have failed in providing for their community. On Lammas, the first sheaves of grain were cut, and by that night, the first loaves of bread for the season would have been baked. The word Lammas comes from an Old English phrase that translates to “loaf mass.” In early Christianity, the first loaves of the season were blessed by the church during mass.

In some traditions, this day honors the Celtic god, Lugh. This celebration of the god, Lugh is referred to as Lughnasad (pronounced Loo-NAS-ah). Lugh is the god of craftsmanship; he is skilled in many things, including blacksmithing, wheel making, and fighting. There is some discrepancy as to why Lugh is honored on this day. Some tales say that this is the date of Lugh’s wedding feat. Other stories say it is because he held a harvest fair in honor of his foster mother, Tailtiu, on this date.

Modern day pagans bake breads and cakes to celebrate the historical grain harvest (and subsequent bread making). Some observers celebrate with a harvest ritual. This ritual typically involves decorating an altar with symbols of the season. Some of these symbols include scythes (because they are used to cut the grain), corn, grapes, apples, and/or any other crops that might be harvested at this time. Some of these rituals involve casting a circle, and saying some words that symbolize their thanks to the earth for the harvest. After the ritual, everyone there eats some bread together, and may also drink wine to wash it down. To honor Lugh, people make crafts and decorations for their house, to represent his skills in those areas. And as with most sabbats, there is feasting. This feast usually is prepared with one’s harvested crops at this time (if they have their own garden).

To learn more check out these titles: