There will be many people celebrating Saint Patrick's Day on March 17, 2019. The holiday, which is also referred to as the Feast of Saint Patrick or Lá Fhéile Pádraig in Irish, is a cultural and religious celebration of the death date of Saint Patrick (c. AD 385–461), the foremost patron saint of Ireland. Saint Patrick was a fifth century Romano-British Christian missionary and bishop in Ireland. Most of what is known about him comes from the Declaration, which is an autobiography thought to be written by Saint Patrick himself. It is believed that he was born in Roman Britain in the fourth century, into a wealthy Romano-British family. His father was a deacon and his grandfather was a priest in the Christian church. According to the Declaration, at the age of sixteen, he was kidnapped by Irish raiders and taken as a slave to Gaelic Ireland. It says that he spent six years there working as a shepherd and that during this time he found God. The Declaration says that God told Patrick to flee to the coast, where a ship would be waiting to take him home. After making his way home, Patrick went on to become a priest. According to tradition, Patrick returned to Ireland to convert the pagan Irish to Christianity. He died on March 17 and was buried at Downpatrick. 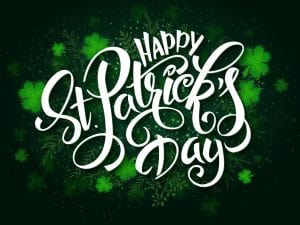 Saint Patrick's Day was made an official Christian feast day in the early 17th century and is observed by the Catholic Church, the Anglican Communion, the Eastern Orthodox Church, and the Lutheran Church. Celebrations generally involve public parades and festivals, céilís (a form of Irish folk dancing), and the wearing of green attire or shamrocks. Allegedly, Saint Patrick used the three-leaved shamrock to explain the Holy Trinity to Irish pagans. Many Christians also attend church services and historically the Lenten restrictions on eating and drinking alcohol are lifted for the day, which has encouraged the holiday's tradition of alcohol consumption. St Patrick's Day parades began in North America in the 18th century but did not spread to Ireland until the 20th century. Over time, many of the parades have become more akin to a carnival. More effort has also been made to use the Irish language, especially in Ireland, where the week of St Patrick's Day is Irish language week.

Learn more about Saint Patrick's Day with the books below.

If there's a particular celebration you or someone you know participates in that we missed, let us know by leaving a comment on this post. Or, if you think we got something wrong, please also comment and let us know. We try to be as accurate as possible, but if there's a mistake, we want to correct it.
We welcome your respectful and on-topic comments and questions in this limited public forum. To find out more, please see Appropriate Use When Posting Content. Community-contributed content represents the views of the user, not those of Boston Public Library