What might be the consequences of over a century of exposure to this ceaseless tale, full of sound and fury and grandiose bellicosity? What might we see in this unending litany of wars and rumors of wars against the great rat foe?

There is another disturbing implication lurking at the heart of all of this propagandistic war-talk. It was made most explicit in a 1973 long-form article on rats in Boston. Its author, Harper Barnes, asserts to his human audience that “rats may be our closest companions and the creatures in the world most like us.” And what are our shared traits? Like humans, claims this author, rats are “tribal and racial bigots, vicious fighters who are quite happy to take on each other singly or to form armies to make war on their own kind.” 24

There is at play here a kind of bizarre inversion of the tendency towards dehumanization so familiar from humanity’s intraspecies wars and genocides. We are unable, when faced with a rat, to call on the age-old mental trick of dehumanization.  Instead, we must recast the rat in the role of enemy combatant in an organized conflict conceived of in wholly human terms. By doing so, we render the rat susceptible to and indeed deserving of the violence soon to be visited upon his or her unsuspecting and bewhiskered head.

It is perhaps no coincidence that the Women’s Municipal League’s war on rats included a push for rat control legislation. For the rat, once caught in that net of words, could be dragged up out of the lawless ‘state of nature’ and into the law-governed human world, there to face judgment for its supposed crimes. This is the terrible truth at the heart of the rat war. To become our enemy, to deserve its merciless death at our hand, the rat must first be humanized.

We Have Met the Enemy...

It's easy to see why we are so accustomed to conceiving of rats as an organized militant faction working against the interests of our species. Such is the insidious power of metaphor, and we are all trapped by language. But there are some who have managed to recognize this word game for the nonsense that it is, and perhaps none is more succinct than Robert K. Coe of Sudbury. In a 1998 letter to the editor, he observed that “rats mean humans no harm, and we kill them simply for behaving as rats behave.” 25

We inhabit a language-world that cannot tolerate other species, species that commit no crime other than being what they are and pursuing the lives they were born to fulfill. But it seems that we cannot act against them without corrupting them in our collective mind into the kinds of monsters that, deep down, we seem to know ourselves to be, that is, the monsters that our language has forced us to become. What is to be done? There seem to be two options. The first is to change our language, and perhaps thereby change ourselves. But if we cannot manage that, then perhaps we must conclude that this endless war has had the wrong target all along.

Something very like this conclusion may have been reached by corrupt (larcenous and bribe-soliciting) former Boston City Councilor Joseph M. Scannell. In a 1941 hearing on allocating funds for rodent control, he made a comment that seems to have acquired a deeper, and no doubt unintended, resonance in this age of anthropogenic mass extinction and global environmental degradation. “And may I say,” he remarked, “that if we delve into this situation of menaces to health, we may find that more attention should be paid to humanity…” 26 The sentiment is echoed by Baltimore exterminator Harold Edmond in reflecting on that city's equally storied struggle against its rats. "'It ain't never been a rat problem in Baltimore,' he says as he notes the confluence of inadequate waste removal and rodent infestation. 'Always been a people problem.'" 27

Our response to this realization need not be misanthropic. Instead, we can simply take it as a reminder to set our own house in order before we turn to wholesale slaughter as a solution. Even People for the Ethical Treatment of Animals activists and rodent control experts are in agreement that killing rats is (by itself) ineffective. Or as expert Bobby Corrigan puts it, "The best way to control rats is not poison, it's good garbage cans." 28.

This is hardly a recent discovery. Even 70 years ago, the precursor to the Centers for Disease Control recognized that "proper sanitation" was believed "by most authorities to be the most effective measure available for controlling rats." 29 Why, then, does the ceaseless killing continue? One of the purposes of this series of posts has been to suggest that part of the problem might lie in our language. Our actions are guided by our thoughts, and our thoughts are largely made of words. Perhaps if we can learn to speak differently, we can learn to think and act differently as well.

What would this different kind of speech look like? For starters, when you see rats, you could try to avoid labeling them in your mind as enemy combatants or devious insurgents, avoid describing them to yourself as deliberately malicious or intentionally pestilential, and remember that "they're probably just afraid of you, as you are of them." 30. You could think about our shared heritage, and about the good things we have in common rather than the worst tendencies we share.

As Sy Montgomery notes,  "All rats - the genus Rattus has more than 60 species - love to snuggle. Rats are social animals. They help other rats in trouble, establish friendships, sleep together, groom, and play with each other. And like people, rats laugh when they're happy." 30 This is a very different picture of rats (and of humans) than was given by Harper Barnes, and it might be that by choosing our words carefully when we speak about rats, we may find ourselves able to think and to live in a way that is kinder to all our mammalian kin, rodent and primate alike. It certainly can't hurt to try.

Most of the content of these posts was drawn from Boston Globe articles; this and the others newspapers accessible through the BPL's electronic resources (and in other formats) are a fantastic source for all kinds of interesting and obscure details of local history. Also valuable for anything to do with the history of local public policy are the digitized city documents from the BPL's collections.

Several books detailing the shared histories of humans and rats served as inspirations for these posts: 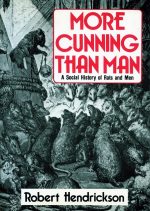 Robert Hendrickson's 1983 More Cunning than Man: A Social History of Rats and Men is an early entry in the genre, as suggested by its non-inclusive title, but it is wide-ranging, energetic, and well-illustrated.

The BPL's physical copy is kept in the closed stacks, but is available for 21-day loan and request like any other borrowable book.

An electronic version is also available for 14-day loan from the Internet Archive.

Two more recent additions to the genre are more limited in focus but nevertheless superb:

Robert Sullivan's Rats: Observations on the History and Habitat of the City's Most Unwanted Inhabitants  focuses on New York, a fact which Sullivan, in typically overweening New Yorker fashion, elides in his title by calling it simply 'the City.' This is nevertheless without question the literary exemplar of a place-based rat-themed bio-eco-sociohistorical survey. It's also a great guide to the murine literature and includes excellent tips for urban ratwatching.

Dawn Day Biehler's Pests in the City covers not only rats but also flies, cockroaches and bed bugs. Her incisive analysis explores the ways in which urban human-animal relationships are informed by and revealing of the social inequalities that continually challenge urban humans (and, let's be honest, humans everywhere else, too). Legendary environmental historian William Cronon gave it his stamp of approval by writing the foreword.

Many of the foundational studies on urban rat behavior conducted by David E. Davis and John B. Calhoun, many in Baltimore, may be read through JSTOR.

And for those who may be inspired to learn more about our fellow urban mammals firsthand, check out this CDC guide to urban rodent surveys. Just how little we really know about the lives and experiences of some of our closest neighbors is made superbly clear by Parsons et al.'s 2017 article "Trends in urban rat ecology," available to read for free through the open-access, Oxford-published journal Urban Ecology.