Presidents Day is an American holiday celebrated on the third Monday in February. This year it falls on Monday, February 18. After the death of George Washington in 1799, his birthday, February 22, became a day of remembrance. Naturally, it was important to the American people to celebrate the first president of the United States. Therefore, all throughout the 1800s, his birthday was an unofficial day of observance. It was not until the 1870s that it became a federal holiday. Senator Steven Wallace Dorsey of Arkansas was the first to propose the measure, and in 1879, President Rutherford B. Hayes signed it into law. The holiday initially only applied to the District of Columbia, but in 1885 it was expanded to the whole country. At the time, Washington’s Birthday joined four other nationally recognized federal bank holidays: Christmas Day, New Year’s Day, the Fourth of July and Thanksgiving. It was the first federal holiday to celebrate the life of an individual American. Martin Luther King Jr. Day, signed into law in 1983, was the second.

In the late 1960s, Congress proposed a measure known as the Uniform Monday Holiday Act that sought to shift the celebration of several federal holidays from specific dates to a series of predetermined Mondays. This proposal was an attempt to create more three-day weekends for the nation’s workers. The Uniform Monday Holiday Act passed in 1968 and officially took effect in 1971 following an executive order from President Richard M. Nixon. Washington’s Birthday was then moved from the fixed date of February 22 to the third Monday of February. Columbus Day, Memorial Day, and Veterans Day were also moved from their traditionally designated dates. After widespread criticism, in 1980, Veterans’ Day was returned to its original November 11 date.

While Nixon’s order referred to the holiday as Washington’s Birthday, it was not long before it transformed into Presidents Day. The changing of the date from Washington's actual birthday led many to believe that the new date was intended to honor both Washington and Lincoln, as it now fell between their two birthdays. Marketers across the country jumped at the opportunity to advertise long weekend Presidents Day sales. By the mid-1980s, Washington’s Birthday was known to many Americans as Presidents Day. By the early 2000s as many as half the 50 states had changed the holiday’s name to Presidents Day on their calendars. The holiday is now a day to recognize the lives and achievements of all American presidents. 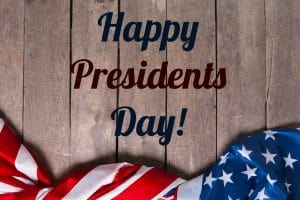 Presidents Day is viewed as a patriotic holiday and is celebrated as such. Many patriotic and historical groups use the date for staging celebrations, reenactments, and other events. Many states also require that their public schools spend the days leading up to Presidents Day teaching students about the accomplishments of the presidents.

From sunset on February 26 through sunset on March 1 2019, Baha’is around the world will celebrate a holiday called Ayyám-i-Há. Ayyám-i-Há is a Persian phrase that refers to the Baha’i Intercalary Days. Intercalary days are days inserted into a calendar to ensure that the calendar functions properly. A day is defined by a rotation of the Earth, and a year is defined by the Earth's circuit of the sun. Any solar calendar needs to use the relationship between these two figures. The Earth takes approximately 365.25 days to circle the sun. The 0.25 days, which do not allow the calendar to fit exactly into a certain number of days each year, add up, over time, to days rather than hours. If left untouched, the calendar would move through the seasons. The Gregorian calendar now solves this problem by adding a day, February 29, every four years because 0.25 x 4 = 1 day. February 29 is therefore an intercalary day.

The Baha’i calendar uses a new and different approach than the Gregorian calendar to correct this problem. It has a system of nineteen months, each made up of nineteen days. Therefore, 361 days every year have very specific, mathematically predictable dates. When the end of the eighteenth month occurs, the Baha’i calendar inserts four or five intercalary days. This corrects the calendar every year to synchronize it with the earth’s rotation around the sun. Interestingly, the Ayyám-i-Há period covers the end of February, so the Bahá'í calendar is not upset by the insertion of February 29 in a leap year.

Bahá'ís celebrate Ayyám-i-Há with parties, gift giving, and by visits with loved ones. This time is also used to prepare for the Baha’i fast that always follows Ayyam-i-Ha.

The Christian Calendar and the Gregorian Reform