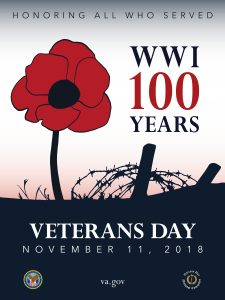 World War I (WWI) was called the Great War, and the War to End All Wars. When it started in August 1914, people thought it would end by Christmas 1914. What nations hoped would be a quick war dragged on for four years, and millions died on the battlefields in Europe. A temporary armistice (ceasefire) took effect on the 11th hour of the 11th day of the 11th month (11 a.m. on November 11, 1918). This brought about the end of fighting in the war. The official treaty to end the war was signed on June 28, 1919. However, many people consider November 11, 1918 as the official end of the war.

A year later, President Woodrow Wilson declared November 11, 1919 as the first Armistice Day; a day to celebrate peace. It was observed with parades and public gatherings. School and work paused at 11 a.m. for a short period of time. Armistice Day was intended to bring up memories of suffering, military incompetence, greed, and destruction. Armistice Day was considered a sacred day because it was supposed to remind people not to start new wars.

In 1954, two more wars had passed (WWII and the Korean War). Veterans' service organizations convinced congress to rename the holiday to Veterans Day. This was to acknowledge veterans from wars other than WWI. Now on Veterans Day, many cities in the United States hold parades for their veterans.

To learn more about the holiday and WWI, you may want to check out these books here:

The Guns of August

The Greatest Day in History

On November 12, Baha’í's around the world will observe the Birth of the Baha’u’llah. It is one of the nine holy days in the Bahá’i faith. As the name suggests, it is

a celebration of the birth of of Bahá’u’lláh, the co-founder of the Bahá’i faith, born in Tehran, Iran on November 12, 1817.

Bahá’u’lláh, which means Glory of God, was born Mírzá Husayn-`Alí Nuri. He deemed himself a prophet and claimed to be a messenger of God. Bahá’u’lláh was eventually persecuted and sent to jail for his religious beliefs. On May 9, 1892, Bahá’u’lláh had a slight fever that worsened over time, and on May 29, he died. He is now buried in a shrine next to the Mansion of Bahjí, where he died. The religious works that Bahá’u’lláh left behind were used as the basis for the Baha’i faith.

Bahá’i’s are free to celebrate the Birth of the Baha’u’llah however they like. Traditionally, they gather together and invite others to join them, regardless of their religion or personal belief. Bahá’u’lláh wanted a world where all of humanity united as one family. Bahá’i’s stay true to his message of unity by welcoming all to come and celebrate with them no matter their differences.

Learn more about the Baha’í faith by checking out the books below.

A Concise Encyclopedia of the Baha'i Faith

The Bahá'í Faith in America